Growing occurrence of genetic disorders and advances in healthcare technologies will fuel global gene editing market share. Many developed and developing countries are witnessing a disturbing rise in rare disease cases. According to the Cystic Fibrosis Foundation (CFF), over 30,000 adults and children in the U.S. suffer from cystic fibrosis, a progressive, genetic disorder that affects the lungs.

Asthma is another chronic genetic condition that affects more than 6 million children in the U.S., as per the American Lung Association. These statistics have amplified the need for advanced technologies like gene editing to develop treatments that can effectively treat or even cure these diseases.

Gene editing involves the removal, addition, or alteration of the genetic material at specific locations in the genome. CRISPR-Cas9 is one of the most popular genome editing technologies because it is more affordable, faster, more efficient & accurate than other techniques. 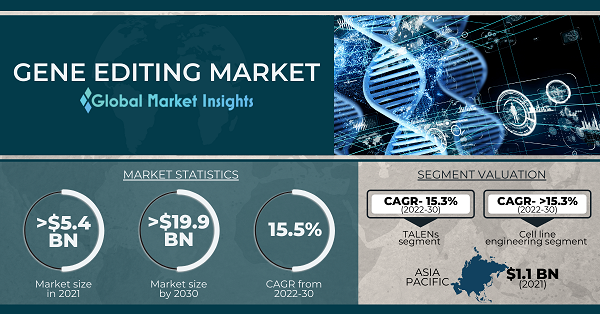 It is being estimated that global gene editing market share will exceed USD 19.9 billion by 2030.Below mentioned is a list of trends boosting the demand for these technologies:

1.    Governmentsincrease in funding for genetic research:

Governments are launching a variety of schemes and campaigns to increase awareness regarding the benefits of gene editing technologies and their role in treating a wide range of rare disorders. The overall mortality rate associated with these diseases is growing steadily every year.

According to the Rare Genomics Institute, genetic illnesses account for nearly 35% of deaths in America in the first year of life, with 50% of the patient pool consisting of children. This has prompted governments across several regions to increase their financial support for organizations that are engaged in researching on gene editing technologies.

2.    Role of gene editing in biotech and pharma companies:

Gene editing techniques will gain significance across biotech and pharma companies because these technologies make it much easier for them to develop newer and more effective medicines. Technologies like CRISPR-Cas9 are becoming widely popular for their efficiency and accuracy.
The method can help medical researchers identify the genes that are drug-resistant, thereby enabling them to research more on ways to overcome such challenges. Through partnerships and agreements, these organizations are aiming to become world leaders in gene editing.

In March 2022, Myeloid Therapeutics and Prime Medicine signed an option and research partnership agreement to create the former’s RNA-based gene-editing technology, RetroT. Prime Medicine would be investing USD 45 million upfront for this deal.

Asia Pacific gene editing market generated USD 1.1 billion in revenue in 2021. The incidence of rare genetic disorders is growing at a notable rate across many countries in the region. Diseases like Epidermolysis Bullosa (EB) are affecting a significant percentage of the regional population. According to the Asian Development Bank Institute (ADBI), the fatal genetic condition affects about 258 million people in Asia and the Pacific, with half of them being children.

TheAPAC region doesn’t have as advanced medical amenities as those found in developed countries. This has dramatically increased efforts to develop gene editing technologies that can tackle the rising mortality rate from EB.