Tissue engineering involves the creation of functional constructs for therapeutic purposes that restore or improve damaged tissues or whole organs in patients.

The process requires three essential components: an appropriate three-dimensional scaffold to support transplantation and growth of cells; cells, which can be reparative cells, that are able to form a functional matrix; and biologically active molecules, such as cytokines and growth factors that promote the formation of the desired tissue type. 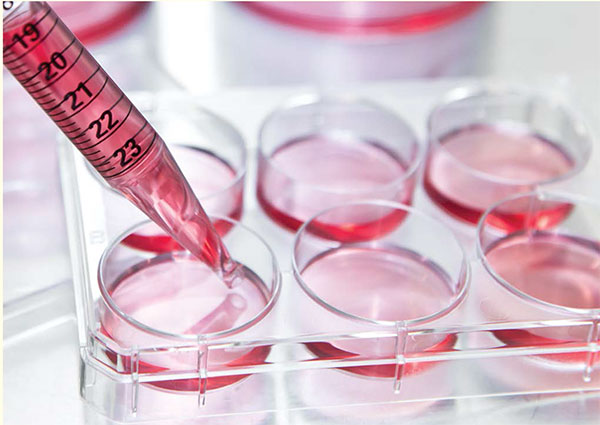 One of the preferred methods to build the scaffold is with the use of hydrogels, polymer-based substances with a high water content that replicate the characteristics of the extracellular matrix. As a natural, well-known ingredient, gelatin holds a huge potential in tissue engineering and gelatin-based hydrogels are a popular choice thanks to their biocompatibility and biodegradability.

In the following interview, Barbara Vanhoecke, Innovation Manager Biomedical at Rousselot, explores the value of low-endotoxin X-Pure gelatins already in early stage research and developments in field of tissue engineering, which might eventually go into the clinic with a strong safety profile.

1, What are the current challenges for tissue engineering?

Despite the significant investment in scientific research, the scalability and the undeniable potential, there are only a few current clinical applications of tissue engineering and even for those commercial success has been difficult to achieve. One of the primary challenges is the lack of a unified regulatory approach, as the fast-moving and complex nature of the industry outpaces the ability of regulatory frameworks to keep up.

But there are also a number of biological challenges. Before implantation the host cells are expanded and grown in tissue culture. Implanting scaffolds populated by these tissuegrown host cells is challenged by the generally low survival in vivo of the host cells. Another major challenge is revascularisation of implanted tissues/organs at the human scale. Moreover, there are major risks associated with tissue engineering due to potential tumorigenicity, immunogenicity and rejection of the graft. However, by using biomaterials that closely mimic the body’s own matrix and by avoiding unnecessary immune responses these risks can be greatly minimised. Further, it is critical that the biomaterial used to replicate the unctions of the body’s extracellular matrix provides the appropriate molecular and mechanical signals needed for the cells to achieve the necessary growth, migration and differentiation.

To generate new, functional and compatible tissue in the transplanted cellular scaffold, low-endotoxin gelatin can provide a favourable environment for cell growth and be used to create hydrogels with the precise characteristics required such as mechanical strength. Since it naturally contains arginine–
glycine–aspartic acid (RGD) peptide sequences, gelatin provides attachment sites for cells, which facilitates well-defined mechanical and biological signalling.

2. Why is it important to monitor and regulate endotoxin levels for tissue engineering?

A type of pyrogen (i.e. a substance that induces fever when released into the bloodstream), endotoxins are a component of the exterior cell wall of Gram-negative bacteria. While they do not directly harm any tissue, they can initiate a strong immune response by human immune cells as an indicator for the presence of bacteria. However, they can also trigger other cell types, like stem cells and endothelial cells. Actually, any cell type containing the toll-like receptor-4 is sensitive to these molecules and can therefore be affected in some way. Depending on the concentration and exposure time, endotoxins can negatively impact cellular activity in terms of growth, morphology, differentiation, inflammation and protein expression even at very low levels (<100ng/ml). In stem, immune and endothelial cells specifically, using lowpyrogen gelatin as biomaterial for scaffolds helps to minimise the risks of both immunogenicity and potentially tumorigenicity of the transplanted hydrogel. 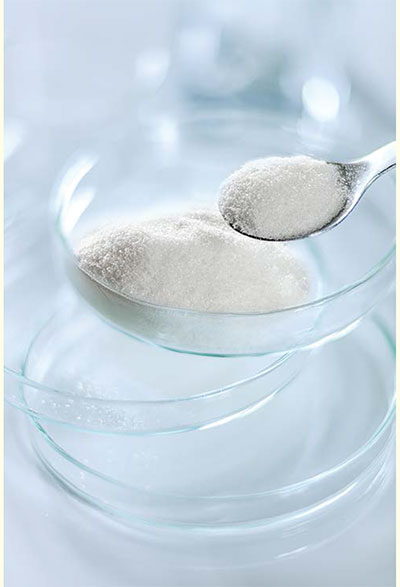 When it comes to immunogenicity, it is important to use highly purified biomaterials for the construction of the scaffold. Contamination with elevated levels of endotoxins and other pyrogens creates unwanted immune reactions once implanted in the patient, effectively risking failure of the implant and endangering the patient’s health. Similarly, since (chronic) inflammation can transform cells and induce tumor growth, the use of extra pure biomaterials might also help avoiding deregulated cell growth and thus tumorigenic constructs.

3. What are the benefits of using low endotoxin gelatin in hydrogels?

Gelatin’s biocompatibility and tunable mechanical properties are two essential characteristics in the development of hydrogels.

During the gelation process many parameters, such as temperature, can be changed or controlled in order to achieve the hydrogel structure of interest. Adequate mechanical strength, for example, can be obtained by modifying the crosslinking degree. Also, countless combinations with other molecules (APIs, other biomaterials) are possible with gelatin-based hydrogels.

These properties, combined with its high purity, make low endotoxin gelatin an ideal material for biomedical applications. To qualify the benefits of using low endotoxin gelatins in cellular hydrogels, a study carried out in collaboration between Rousselot and the University Medical Center of Utrecht set out to assess the effect of endotoxins contained in hydrogels on differentiation of mesenchymal stem cells (MSCs) and peripheral blood mononuclear cells (PBMCs). Improved differentiation of MSCs into chondrocytes was seen after 28 days of culturing in a X-Pure low endotoxin gelatin hydrogel, compared to a non-purified gelatin. Also, a reduced inflammatory response of PBMCs was observed when cultured on top of a low endotoxin gelatin hydrogel as evaluated by measuring TNFalpha and CCL-2 release in the culture medium after 3 days of culturing.

X-Pure’s potential in endotoxin-sensitive cell cultures was also highlighted by a second study carried out in collaboration with Ghent University. A comparison on the viability of immune cells (THP-s) in a 10% X-Pure gelatin solution versus MatriGelTM showed a significantly improved cell survival in X-Pure after 3 days of culture. This study highlights the potential of X-Pure as a valid and improved alternative to MatriGel for endotoxin-sensitive cell cultures, as it also represents a solution to the batch to batch variation and the overload of growth factors associated with MatriGel.

Interestingly, gelatin hydrogels devoid from endotoxins can also be used for storage or transport of endotoxin-sensitive cells, as they significantly improve their survival. Preliminary results of a study carried out in collaboration with Ghent University showed that the addition of 10% X-Pure gelatin to the medium significantly improved viability of endothelial cells after 3 days of storage at 4°C, even in absence of serum, and was significantly better compared to non-purified gelatin. 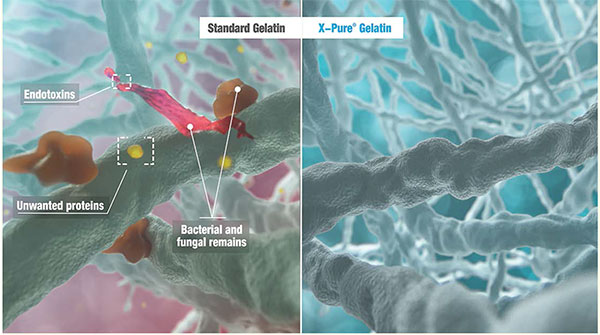 4. What else should hydrogel manufacturers look for when choosing low-endotoxin gelatin?

Among the several factors to be taken into consideration to evaluate low endotoxin gelatins, other pyrogenic activity in the biomaterial used is the first that comes to mind.

These other non-endotoxin pyrogens can also trigger an adverse immune response in the human body and cause an anaphylactic shock. Associating low endotoxin levels to low pyrogenic activity can be a dangerous assumption, as the LAL assay, commonly used to measure endotoxin contamination, does not measure non-endotoxin related pyrogenic activity. The results of Rousselot’s latest purity testing show that the full X-Pure portfolio consisting of both type A and B gelatins (hydrolysed and non-hydrolysed), can be produced and delivered pyrogen-free. This is important since there are no type A gelatins today on the market that are free from pyrogens. For some applications however, such as for the use of gelatin nanoparticles in drug delivery systems, the selection of type of gelatin is very important to get the desired release profile of each compound.

The quality, safety and compliance of excipients can’t be overlooked either. It’s important to partner with a supplier committed to consistently deliver ingredients of the highest quality, compliant with the international standards as well as fully traceable and extensively tested.

In such an evolving field, collaborative partnerships with suppliers can be an invaluable source of formulation, technical and R&D support. This is why Rousselot works in close partnership with its customers to co-develop new products and applications.

5. What other exciting applications is X-Pure suitable for?

Furthermore, the fields of biomolecule and drug delivery are increasingly turning to ultrapure gelatin to prepare injectable micro- and submicron particles as well as colloidal gels that comply with the highest regulation and quality standards 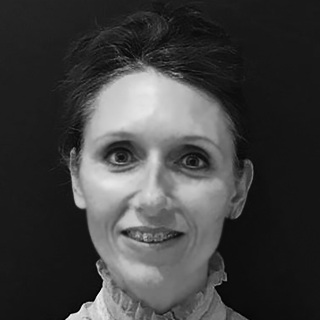 Barbara Vanhoecke holds a PhD in Medical Sciences as well as a Master in Biochemistry. She joined Rousselot in 2017 and is now Innovation Manager Biomedical working in particular on the X-Pure range. Barbara Vanhoecke has published two patent applications and is author/co-author of more than 40 scientific papers.