Cancer is an incurable disease. Cancer relapse is credited to a population of cells, called as Cancer Stem Cells (CSCs). These drug-resistant cells possess stem-like characters such as pluripotency, self-renewal and differentiation. The latest trend in anticancer therapy is to eliminate CSCs so that cancer can be completely eradicated.

Cancer, as a group of heterogeneous diseases very well known. Unimaginable amounts of money and man-hours have been spent in finding cure for this deadly disease. However,it still remains in the top five list of diseases affecting mankind. Millions of patients suffer worldwide every single day, hoping to get cured. Most of them lose the war. The worldwide statistics of various cancers is terrifying. Every single cell type in the human body can undergo malignant transformations leading to cancer of that particular cell type. Certain cancers are rare, while many are prevalent. Figure1. shows the incidence and mortality of various types of cancers in both sexes worldwide. Overall, cancer remains a major health concern across the globe.

The current cancer treatment options include chemotherapy, radiotherapy, surgery or any combination therein, depending on the location and type of cancer. The most favoured choice is chemotherapy. The cancer chemotherapy practise has a history of more than eight decades. Various chemotherapeutic drugs have been used since 1946. These drugs are extremely toxic with major effect on rapidly dividing cancer cells. Other body cells such as hair, bone marrow, skin and gastrointestinal tract are severely affected by these drugs leading to adverse effects such as alopecia, cardiotoxicity, myelosuppression and mucositis. Radiotherapy, like chemotherapy, destroys cancer cells in addition to healthy cells and tissues near the cancer site. The side effects vary from patient to patient. Surgical removal, though a better logical choice, fail to guarantee complete removal of cancerous tissue. Few cells left behind during surgery can give rise to a newer tumor, leading to tumor relapse. Definitely, the treatment options are not full proof.

Recent advances in the cancer drug discovery have led to the development of molecularly-targeted cancer therapeutics, which are small-molecule drugs or macromolecules that block the growth and spread of cancer by interfering with the functions of proteins - enzymes of receptors – crucial for the survival of cancerous tissue. Together these drugs form a class of so-called precision medicines. Several blockbuster drugs such as imatinib have been successfully used in therapy for  the last decade or so. These drugs are less toxic than their chemotherapeutic counterparts. Several limitations exist for these drugs too. These include the development of resistance, limited therapeutic efficacy and cost, in addition to others. Nonetheless, this class of drugs is an integral part of today’s cancer therapy.

Over the years, basic research in cancer genesis, metastasis and pathways which can be exploited for drug development has enriched our understanding of cancer biology significantly. Advances in molecular biology, genetic engineering have contributed immensely to the current knowledge about cancer. Previously, as proposed by Peter Nowell (clonal evolution model), it was believed that  cancer occurred due to mutations in oncogenes and/or tumor suppressor genes, e.g., p53, leading to uncontrolled cell proliferation and decreased cell death. The recent hypothesis, Cancer Stem Cell (CSC) model, proposed that a single CSC which has acquired an oncogenic mutation is capable of developing a full clone leading to cancer development. It has been demonstrated over the last decade or so that these CSCs are inherently chemoresistant. The conventional chemotherapeutic drugs are not effective in eliminating this group of cells possessing stem-like characters – self-renewal, pluripotency, and differentiation. Agents capable of eliminating CSCs should, theoretically, within the realm of the concept, be able to completely eradicate  cancer or at least achieve therapeutic success, i.e., prolongation of overall survival (Figure 2). Now, this is something very interesting! The concepts seem too good to be true. Indeed, it is difficult to target CSCs without affecting normal stem cells. This new school of thought has inspired several researchers across the globe to undertake studies involving CSCs. The field is little less than two decades old. Several fundamental aspects of CSC development and the associated dysregulated pathways are being investigated in an attempt to get clues crucial for CSC targeting. CSC-targeting seems to be a promising strategy to put breaks on cancer. 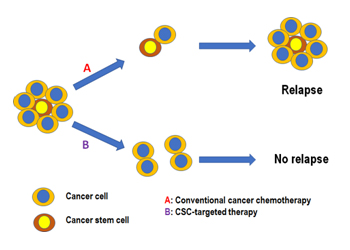 Current research is focused on identifying this population of so-called CSCs or ‘tumor-initiating cells’. These cells possess great metastatic potential. They are capable of invading and giving rise to highly recurrent and refractory metastatic form of the disease. Since tumors are so very heterogeneous, it is envisaged that the tumor microenvironment is extremely complex. Despite all the challenges, researchers have, at least in part, identified signalling pathways leading to CSC development. Some of these include Notch, STAT3, Hedgehog, NANOG, PTEN, and others. Parallelly, the CSC targeting strategies were put forth. Aberrant CSC signalling pathways are preferred to encash differences between normal stem cells and CSCs signalling pathways. Another interesting area is CSC cell surface markers such as CD44, CD133, CD24 and many others. These markers can be specific to the cancer type. The identification of the cell surface markers has aided greatly in identifying the CSCs as well. The success of CSC targeting may be gauged from the reduced numbers of these cells expressing them.

Tumor microenvironment (e.g., angiogenesis, lower pH, hypoxia) present another avenue for successful targeting by small- or macromolecular agents. Enzymes or receptors mediating tumor survival under stressful condition can be good targets for eliminating CSCs. The literature is full of reports on anti-CSC therapeutics. These agents range from small-molecules, oligopeptides, proteins, siRNA, ribozymes, oligosaccharides, antibodies, etc. While small-molecules drugs have been historically preferred for obvious reasons, targeting macromolecular drugs have always been challenging. As long as targeted delivery of these agents can be achieved, their therapeutic benefits are self-evident. Even for conventional chemotherapeutic drugs, selective targeting to tumor tissue has been proven to reduce the adverse effects.

Several pharmaceutical companies have been beating around the bush as far as the discovery of newer agents targeted towards CSCs is concerned. A lot of pre- and clinical candidates have reached advanced phases of drug development. Table 1 summarizes a few of these agents under development. In addition, there are a large number of agents – small- and macromolecules – under various stages of drug discovery. The patent literature clearly demonstrates the usefulness of these agents as potential anti-CSC therapeutics.

Table 1. Candidates targeted against CSCs and their developmental status 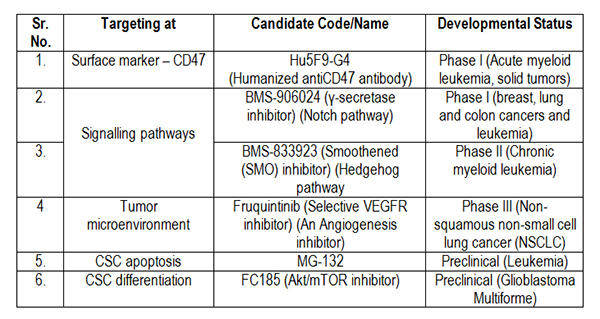 A whole range of CSC kinases required for their development and maintenance are potential targets for therapeutic intervention. Boston Biomedical, Inc. (http://www.bostonbiomedical.com), is a leading drug discovery company with anti-CSC molecules advanced to Phase III clinical trials. The orally administered candidate napabucasin targets STAT3 pathway in CSCs and is currently being investigated for the treatment of metastatic pancreatic ductal adenocarcinoma, alone and in combination with paclitaxel and gemcitabine. Another orally administered Phase II clinical candidate from the same company is amcasertib, which targets CSC stemness pathways such as Nanog by inhibiting stemness kinases. It is being tested as monotherapy for the treatment of gastrointestinal stromal tumors and hepatobiliary cancer, ovarian cancer and multiple solid tumors and as a combination therapy for hepatocellular carcinoma and multiple solid tumors.

Another parallel approach to overcome drug resistance in CSCs could be the development of agents affecting epigenome. Investigations focusing on pathways responsible for the development of resistance in CSCs are likely to yield fruitful outcomes. Making CSCs sensitive to conventional chemotherapeutic drugs may not be a distant dream anymore. CSCs express variety of efflux transporters (e.g., ABC transporters) likely to be responsible for drug-resistant states of CSCs. Inhibitors of efflux transporters are known to sensitize cancer cells to chemotherapeutic drugs are known.A Similar approach may be tried for CSCs. A lot needs to be done in this direction. Various strategies of CSC intervention would, sooner or later, become a reality. Near future will ascertain the fate of clinical candidates in advanced clinical development with reference to approval by FDA. This will certainly make the critics of cancer stem cell hypothesis quiet and proponents joyous. The best approach will be to wait and watch. 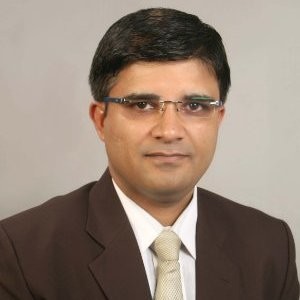 The author is currently associated with SVKM’s NMIMS (Deemed to be University), SPP School of Pharmacy and Technology Management, as Associate Professor, since July 2012. He is a Medicinal Chemist with expertise in Computer-Aided Molecular Design, with >9 years of drug discovery experience in Indian and Multinational Drug Discovery companies. His research interests include design and development of anti-CSC agents, anticancer agents and fluorescent probes for biomedical applications. He is a consultant to Godavari Biorefineries Ltd., Mumbai (A Somaiya Group Company) in the area of anti-CSC therapeutics.