Exosomes are endocytically originated bilayer nanovesicles that take part in intercellular communications through functionally active and cell-specific cargo. It has potential application as a non-invasive biomarker and drug delivery vehicle. It bears exceptional biocompatibility, retention, cell targeting, and macromolecular cargo delivery efficiency. Milk exosomes have gained much popularity due to their potency, safety, scalability, and cost-effectiveness.

Exosomes are bilayer, nano-extracellular vehicles (EVs) that areproduced by endocytosis in mammalian cells. Under physiological conditions, they are involved in intercellular communication viaproteins, lipids, and RNAs[1, 2]. With a size distribution of 30-100 nm, exosomes have been identified in various biofluids like amniotic fluid, blood, semen, andurine, CSF, and breast milk.  The exosomes gain popularity in targeted drug delivery due to its high compatibility and cell target specificity. Since they can be internalised by mammalian cells, they are exploited in drug delivery and as biomarkers in diagnosis and therapeutics[1, 3]. 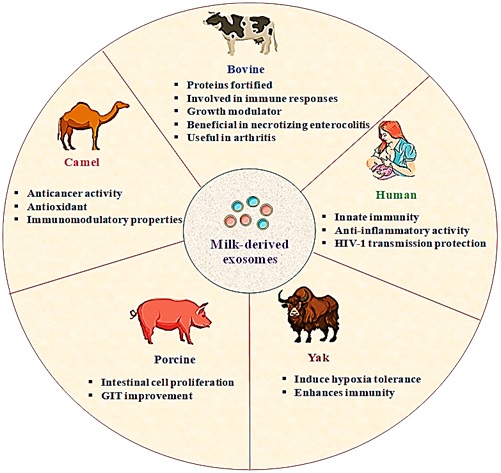 This manuscript focused on milk-derived exosomes andtheir sources (Human, bovine, camel, porcine, and yak). The article specially embarks on the isolation of milk-derived exosomes bydensity gradient ultracentrifugation, differential centrifugation, exo-quick precipitation,and size-exclusion liquid chromatography. Further emphasis has been given to the proteomics of the milk-derived exosomesand their stability. At last, their applications as an inherent bioactive component and as an agent in the delivery of therapeutic agents with a unique mark on their bioavailability enhancement have been crosstalked.

Mature milk and Colostrum can be isolated from various species of mammals, as summarized in Figure 1. Considering the diversity of sources, impurities like external particles, macromolecules viz. proteins and nucleic acids, etc., may contaminate the exosomes and severely affect their purity. Robust, reproducible, and optimised isolation approaches are thus required to produce pure exosomes [6].

In Differential Centrifugation, samples are subjected to successive centrifugation, and the centrifugation force is increased in each following step along with centrifugation time. The separation is based on sedimentation  rate.  Larger particles are removed early, leaving the smaller particles to be centrifuged in the following steps. Samuel et al. isolated milk-derived exosomes by centrifugation method (5,000 g; 30 min.; 4°C), and this process removed fats from the milk. Casein and cell debris were removed in three step-by-step centrifugations at increasing speeds and time. The product obtained was ultracentrifuged at 100,000 g to get a pellet, and then the pellet was resuspended in 0.5 mL PBSto disperse the exosomes. The exosomes of size 30-150 nm were obtained and stored at -80°C[7].High sampling volumes and the fragile nature of exosomes prone to vesicle rupture are the limitations of this technique.

Size-exclusion Liquid Chromatography demands that thesample solution be subjected to ultracentrifugation, followed by size-exclusion liquid chromatography (SEC).Blanset al. demonstrated that exosomal vesicles could be effectively isolated from whey proteins and casein of human and bovine milk. The isolates were flooded with lactad her in, CD81, CD63, and CD9 and did not contain extravascular proteins [10]. Using SEC, one can use buffers mimicking the physiological viscosity and osmolarity, thus preserving the biological function of exosomes.

System Biosciences (USA) developed ExoQuick™ polymer and commercialised it to isolateexosomes from biofluids of  humans and cell culture media. Bickmore and Miklavcicetal. Used the precipitation method for the isolation of exosomes. 50-350 nm size of vesicles was observed by SEM analysis, and Nanoparticle Tracking Analysis reported yield of 8.9 × 109 (± 1.1 × 109) particles/mL). Advantages like high-throughput, scale-up ability, and good yield of exosomes from small volumes (less than 1 ml) without ultracentrifugation  highlighted the use of this technique in many scientific publications [11].

Proteomics profiling of  exosomes is necessary because it may contain impurities in the form of proteins, nucleic acids, mRNAs, lncRNA, etc.[1]. A quantitative technique like LC-MS/MS can be used for exosome proteomics. Since it is a label-free technique, it will minimise sample handling, protect the exosomes from undesired changes and reduce sample wastage during processing. Hence, direct quantification of proteins and peptides by LC-MS/MS of highly explored for exosomes proteomics.

Researchers used high pH-reverse phase chromatography for the isolation of exosomes.  For proteomic profiling, the vesicles were subjected to MS/MS coupled nano-liquid chromatography, and 2107 proteins were identified by this technique. The lactation stage and somatic cells in milk samples were responsible for the proteomic variation. KEGG database was used to characterize proteins based on their involvement in vesicle formation,trafficking, etc.[12].

Yang et al. used the iTRAQ proteomic method with LC-MS/MS, and found 575 proteins expressed in variable quantities in several species and reported a total of 900 milk exosome proteins. Functional analysis has shown the binding and stimuli-responsive nature of exosomal proteins[13]. Similarly, Chen et al.executed proteomic profiling of protein and mRNAs. LC-ESI-MS/MS analysed the exosomes from milk samples of Landrace female pigs. Sixteen thousand three hundred four mRNAs and 639 were identified by RNA-sequencing [14]. Thus, the milk-derived exosomes must  be subjected to proteomic analysis. This will help in predicting the biogenesis and cellular effects of exosomal proteins. However, knowing the stability profile of milk-derived exosomes is also essential. The subsequent part focus on this aspect.

Generally, exosomes protect the breakdown of their internal components from biological fluids. To evaluate this, Osteikoetxeaetal. subjected EVs to different concentrations of Tween 20, Triton X-100, deoxycholate, and SLS (sodium dodecyl sulfate), to check their stability. The  blisters from MiaPaCa, Jurkat, THP-1, and U937 human cell lines were taken, and the surfactant concentration  required for their lysis was determined. Results suggested negligible sensitivity of exosomes towards lysis than ectosomes/apoptotic bodies[15]. Liao et al. explored the effect of gastric and pancreatic digestion on the stability of milk-derived exosomes and intestinal membrane permeability. Around 288 mature microRNA were identified from various exosome samples. Moreover, 610 microRNA came forward having low abundance. hsa-miR-22-3p was plentiful among all, while the top 15 micro RNAs contributed to 11% of the sequences. The studies showed a stable abundance of human milkexosomes[16].

Concluding the above stability studies, stable milk-derived exosomes can be utilisedin drug delivery, enhancing the bioavailability of therapeutics, or can be used as an innatebioactive component.

Besides milk exosomes, others derived from mesenchymal stem cells (MSCs), tumor cells, etc., are being explored [19]. Commercial scalability, biocompatibility, stability in the digestive tract for oral drug delivery, and long-circulating half-life highlight milk-derived exosomes[20, 21]. The following section deals with pharmaceutical uses of milk-derived exosomes.  In Figure 2 we have demonstrated various milk-derived exosomes related applications. Milk-derived exosomes are inherent bioactive components in the immunity modulation of infants. Milk and colostrum of human origin have several immune components like antibodies, cytokines, oligosaccharides, and nucleotides. Exosomes are increasingly studied among these[22]. 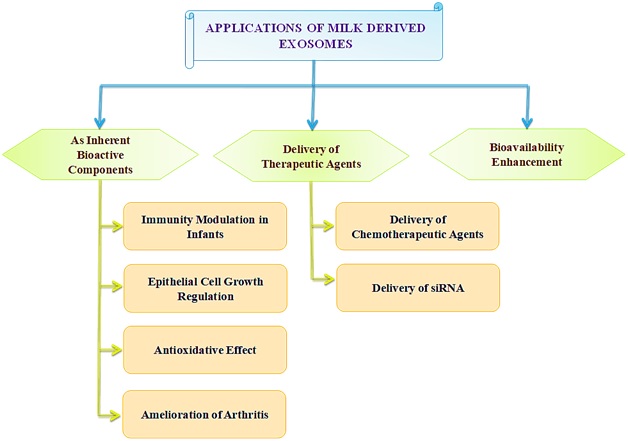 Kosaka et al. found that exosomal miRNAs are extensively expressed in milk. Accordingly,they discovered the participation of miR-181a and miR-17 in B-cell and T-cell differentiation/regulation and thus modulating the immunity are highly expressed during early lactation stages[23]. Necrotizing enterocolitis (NEC), a neonatal ailment, may lead to mild inflammation in the intestines, multiorgan failure and thus can be fatal. To evaluate the role of milk exosomes in NEC, Hocket al. exposed anintestine epithelial cell line (IEC-18) to rat milk exosomes. They promoted cell viabilityand proliferation.The activation of toll-like receptor 4 was also inhibited upon the interaction of exosome with an epidermal growth factor[24]. Other similar studies also show the beneficial effects of exosomes in NEC[25].

Curcumin, an anti-inflammatory, antioxidant, anti-proliferative, and antiangiogenic, hasgood safety profiles. However, its bioavailability remains a concern [32].Aqil et al. formulated curcumin-loaded exosomes. In vivo studies demonstrated increased bioavailability of curcumin upto 3-5 folds systemically. Up to 25-30% less tumor development was observed in cervical CaSki tumor xenograft. Also, the system was not toxic and can increase the bioavailability of drugs[33].

As discussed above, numerous advantages of milk-derived exosomes are facilitating their use in the biomedical field. Exosomes originated from animals; hence, allergic incompatibilities with animal products are challenging, and safety evaluation becomes crucial. An extensive assessment is needed for long-term stability and prolonged use effects. However, keeping regulatory bodies in mind, their scale-upis a challenge plus a lucrative opportunity. New techniques for isolation of exosomes, purification, and high-quality control are needed to develop quality exosomes. Except for humans, other sources of exosomes can be kept and treated in industrial facilities, and their nutrition levels can be maintained. This altogether may help in developing consistent good quality products[34]. Several impurities like viral loads, intracellular components, proteins,etc., are to be strictly monitored [35].Recent advances in purification include tangential flow filtration (TFF) with ultracentrifugation[36].Lastly,desired physiochemical and biological propertiesare to be checked for product [37].

Concluding remarks
Milk-derived exosomes can successfully cross the biological membranes and release drugs at the targeted site. This review highlights several sources, isolationmethods, proteomic studies, stability dynamics,and applications of milk-derived exosomes. Numerous sources for milk exosomes are available, with each source having unique properties. However, due to contaminants, qualitative and quantitative impurity profiling of exosomes is required. The proteomics profiling and stability of exosomes were evaluated by various scientists using different techniques.The applications of milk-derived exosomesinthe biomedical field are gaining pace. Thus, they can be extremely important future vesicles in therapeutics. 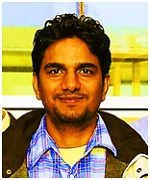 Rakesh K. Tekade is a formulation researcher with of teaching and research experience. He has an explicit experience of over 10 years in teaching various modules for Ph.D, Masters & Bachelors students (@ Universities based in USA, UK, Malaysia, & India). He currently serving as Associate Professor at NIPER-Ahmedabad (An Institute of National Importance Government of India). Prior to this, Dr. Tekade was faculty at International Medical University, Kuala Lumpur, Malaysia. He took his postdoctoral trainings from UT Southwestern Medical Centre, Dallas, Texas, USA and University of Hawaii, Hilo, Hawaii, USA. He is a recipient of Commonwealth Fellowship at University of Central Lancashire, Preston, UK. Recently, Dr Tekade has been listed as Top 2% researcher in the field of Pharmacy and Pharmacology, by Stanford University, USA. 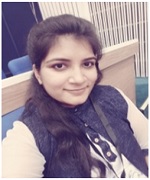 Nupur Vasdev is currently pursuing her PhD in the department of pharmaceutics from NIPER-Ahmedabad. She has completed M.S (Pharm.) in pharmaceutics from NIPER-Raebareli. She is currently working on targeted nano particulate drug delivery for obesity and cancer. Her research focus also includes surface modified exosome drug delivery for cancer and obesity.

Manisha Choudhary is currently pursuing her M.S. (Pharm) in Pharmaceutics at NIPER-Ahmedabad, India. She is currently working on aptamer decorated nanomaterials for improving the targeting. Her work majorly focuses on the improvement of the stability, targeting and robustness of aptamer conjugated nanomaterials for cancer treatment. Her work also focusses on the extraction of natural derived exosomes. 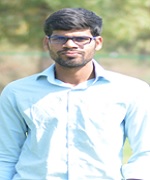 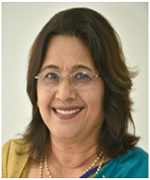 Professor Kiran Kalia is a currently serving as Director and Professor at NIPER-Ahmedabad. Her work basically focused on the Proteomic markers for diabetic nephropathy, diabetic retinopathy and metal toxicity studies. Recently she started exploring the exosomes mediated drug delivery for delivering the genes for treating various ailments like cancer, wounds and diabetic nephropathy.