Life-style and environment-induced metabolic derangement primes prediabetes stage with insulin resistance and increased BMI that eventually progresses to diabetes and NAFLD leading to CVD. Prediabetes is a natural check point to prevent diabetic epidemic since 70 per cent of prediabetics develop diabetes during their life-time. This article discusses diabetes causes and prevention.

For the past ten years ample evidence exists to suggest that what we eat and how we live determines how our body and genes behave. A rapid rise in diabetic population noticed during the past thirty years has largely been attributed to lifestyle and physical inactivity. While the lifestyle and environment impacts on body physiology are not seen and experienced right away, a slow process of metabolic dysregulation begins with mild increases in adiposity (Figure 1). A soaring number of individuals with metabolic imbalance eventually enter the territory of insulin resistance and increased body mass index. Past three decades have already witnessed a dramatic increase in the number of diabetic individuals, a majority of whom end up not only having diabetes-related complications but also increased mortality as a result of cardiovascular disease (CVD) (1). This process of diabetes progression may take decades through elevation of proatherogenic lipoproteins, oxidative stress, and inflammation, and eventually leading to cardiovascular disease through deposition of lipids in the aorta (2) (Reviewed in (3). How these factors contribute to vascular complications are depicted in figures 1 and 2. In the past few decades, disturbance in energy homeostasis appears to be responsible for metabolic derangement that sets the stage of metabolic disease progression (4,5). This environment, lifestyle, and energy imbalance combination have largely contributed to prediabetes state that progresses to diabetes and ultimately increases the risk of heart disease, if not controlled in a timely fashion.

A large amount of data suggests that weight gain is associated with the development of prediabetes and insulin resistance (6). In the Unites States, there has been a dramatic increase in the level of mean BMI (7,8) and this trend has followed in many other developed and developing countries, suggesting the contribution of lifestyle in the development of obesity, which triggers insulin resistance and prediabetes (9). Southeast Asians have certain unique clinical and biochemical abnormalities that include increased insulin resistance, greater abdominal adiposity i.e., higher waist circumference despite lower body mass index, lower adiponectin and higher high sensitive C-reactive protein levels. This phenotype makes this population more prone to diabetes and premature coronary artery disease. At least a part of this could be due to genetic or epigenetic (described below) factors. However, the primary driver of the epidemic of diabetes is the rapid epidemiological transition associated with changes in dietary patterns and decreased physical activity as evident from the higher prevalence of diabetes in the urban population. There is a correlation between weight gain and increased risk of diabetes; every kg of weight gain increases diabetes risk by 4.5-9 per cent (10). The fructose-containing beverages as well as high calorie ‘comfort’ food, have made a definite impact on mean BMI and visceral fat in the US as well as in the developing countries like India and China, where the incidence of diabetes is growing at an alarming rate (11). A 2016 report from WHO suggests that in India alone almost 9 per cent population is diabetic (12) with a higher incidence in big cities in the range of 15-20 per cent (13). This does not include those who have not been diagnosed or those who are a prediabetic. In China, as per WHO report, 10 per cent of adults, excluding those with prediabetic profile, have diabetes (14). If we take into consideration the prediabetic population, the numbers could be even more frightening (15). 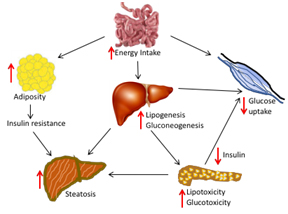 Figure 1. Excess calorie intake increases adipose tissue which contributes to insulin resistance. In addition, lipogenesis and gluconeogenesis in the liver are elevated that inhibits insulin secretion by the pancreas and inhibits glucose uptake by muscles.

During the past decade, in the low- and middle-income countries a rapid rise in diabetes population is recorded, which was associated with higher per centage of death attributable to diabetes and higher blood glucose prior to age 70.  As per United Nations 2017 population report, as of 2014 the combined population of India (1.27 billion) and China (1.37 billion) estimated to be about 2.66 billion. This gives an estimate of the number of diabetic population adding each year, in addition to growing numbers of individuals with prediabetes. This necessitates serious innovations and approaches to prevent and treat increasing numbers of the diabetic population. India has seen an alarming rise in the incidence of diabetes and associated cardiovascular disease risk, which warrants efforts on the part of the scientists and medical professionals to educate and create interest in young scientists, foster interactions among industries and academia and propagate public awareness about this silent killer.

The type of food we eat and the lifestyle we choose to have greater influences how our genetic codons function. An inappropriate relationship with the environment that includes eating habits and physical activities results into lifestyle diseases. Lifestyle and environment not only modifies body metabolism but also the genetic material without alteration in the DNA sequence and this modification is transmitted to the new cells and to new generation. This process of inheritable modifications in DNA is termed as epigenetics (16). Epigenetics include DNA and histone protein modifications as well as micro RNAs. The first scientific finding challenging the central dogma of gene function was challenged 4 decades ago by P. Chambon of France who showed that eukaryotic RNAs are first transcribed into its precursor form that undergoes a process called splicing (17,18), which precisely removes the “unwanted” (known at that time) introns to make mature RNA transported into cytoplasm for protein formation. These introns or interrupting sequences were termed as “nonsense” DNA and those needed for protein formation as “sense” DNA. It turned out at that time that we had more “nonsense” than “sense” in our DNA and that this nonsense DNA have no function (19). Later discoveries revealed that these introns have important function to activate or inhibit gene transcription. Now it is well established that these introns also code for micro-RNAs involved in epigenetic regulation.

Recent scientific evidence suggests that these epigenetic mechanisms give rise to a number of lifestyle disease including diabetes. DNA methylation is the most abundant epigenetic modification that directly affects the function of a gene in eukaryotes (20,21). Apart from histone methylation/ demethylation (22), acetylation and deacetylation are other modifications in histone proteins carried out by two enzymes, Histone Deacetylase (HDACs) and Histone Acetyl Transferase (HAT) (23-25). Major tissues experiencing metabolic dysfunction in diabetes mellitus are liver, muscle, adipose, and pancreas. (4). DNA modifications in the genes associated with diabetes in these tissues may trigger the progression of diabetes. Histone modifying enzymes contribute to the activation or inactivation of transcription by catalysing the unfolding or further compaction, respectively, of chromatin structure. Wren and Garner (26) analysed electronically available scientific literature, amounting over 12 million Medline records, for parameters like genes, diseases, phenotypes, and chemical compounds linked to other objects within the T2DM literature to conduct a comprehensive survey.  It was surprising to note that epigenetic factors were among the highest statistically significant in this analysis and implying epigenetic changes as causal factors in the pathogenesis of T2DM.

Given the prevalence of diabetes in the most populated countries, India and China, the number of diabetic and prediabetic individuals are on the rise, and warrants identifying the prediabetic individuals and provide necessary measures to prevent progression into the diabetic stage.  Prediabetic individuals are those who have borderline glucose and HbA1c and impaired glucose tolerance. A majority (70 per cent) of these prediabetic individuals eventually develop type 2 diabetes over their lifetime (27) and this transition of prediabetes to diabetes is fueling the diabetes epidemic. According to the US Centers for Disease Control and Prevention, an estimated 79 million Americans have prediabetes. In addition, about 11 per cent of these individuals develop full diabetes each year. That means as many as 53.1 million Americans could develop diabetes by 2025. Since prediabetes is a high-risk state for developing diabetes (27), diagnosis and prevention of progression of diabetes in prediabetic individuals is the right check-point to help prevent diabetes progression and prevent diabetes-associated CVD and other complications. Clinical studies (28) to suggest that maintaining euglycemia in prediabetics by certain interventions like metformin and changes in lifestyle prevent the development of diabetes compared to those who were not on metformin or on regular exercise. Thus, maintaining HbA1c can prevent individuals from developing full-blown diabetes. It should be noted that 1 per cent increase in HbA1c is associated with a 28 per cent increase in the risk of death independent of age, blood pressure, serum cholesterol, body mass index, and cigarette smoking habit (10).

Diabetes mellitus individuals often have fatty liver leading to non-alcoholic fatty liver disease that develops into Non-Alcoholic Steatohepatitis (NASH) and fibrosis (29). Overweight causes NAFLD, which is a risk factor for developing diabetes (30). Thus, non-alcoholic fatty liver disease and type 2 diabetes coexist and at times synergistically drive adverse effects and contribute to the development of diabetic complications (31). About 20-30 per cent of diabetic and obesity population have fatty liver and 6 per cent population have NASH (32). Individuals with fatty liver have 13-fold higher mortality risk in their 3rd phase of life. Thus, in addition to coronary artery disease, individuals with diabetes also suffer from NASH. One of the hallmarks of diabetes is the elevation of Advanced Glycation End products (AGEs) involved in oxidative stress, vascular inflammation (33,34), and endothelial dysfunction (35,36). AGE accumulation in the liver causes liver damage and contributes to hepatotoxicity and liver dysfunction as a result of increased inflammation and fibrosis (37). Indeed, circulating levels of AGEs have been found to be elevated in patients with NAFLD and liver cirrhosis (38). 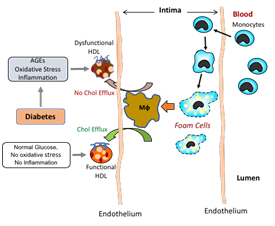 Figure 2. Diabetic individuals have high Advanced Glycation End products (AGE) that increases oxidative stress and inflammation leading to the formation of proatherogenic oxidised LDL and induces HDL modification and making it dysfunctional. This impairs removal of cholesterol from the arterial wall and promotes atherosclerosis.

In diabetic individuals, the elevated advanced glycation end products (AGEs) are shown to be involved in oxidative stress, vascular inflammation and atherosclerosis (33,34,39) (Figure 2). Since AGE interventions reduce diabetes-accelerated atherosclerosis (40), it suggests a definite role of AGE in promoting vascular injury. Clinical studies found that AGEs were associated with the severity of subclinical atherosclerosis (41). In addition, diabetics have large lesions and larger mean necrotic area (42). Among other factors, HDL, an atheroprotective lipoprotein against developing CVD (3), has been shown to be one of the primary causative factors for increased CVD risks in diabetes in two ways: first HDL concentration in diabetes mellitus is generally lower compared to age- and sex-matched non-diabetes (43), and second, HDL function is compromised significantly in hyperglycemic conditions (44,45), which impairs reverse cholesterol transport (RCT) (Figure 2) (3), a process that removes bad cholesterol from the body and inhibits the progression of atherosclerosis and CVD-related complications.

In summary, healthy lifestyle together with the diagnosis and adequate step at the prediabetic stage may benefit individuals in preventing progression into the diabetic stage. While a number of therapies are available for diabetes, at times more than one therapy is needed to keep glucose under control. An aggressive approach in finding additional efficacious diabetes treatment together with healthy lifestyle may help reduce diabetic population in Asian and other countries.

Ajit is an accomplished leader in research and drug discovery for about three decades in multiple therapeutic areas. Currently, he is in the leadership position at Gemphire Therapeutics. Had leadership roles at Amgen, Bristol-Myers, Pfizer, and Esperion. He served as a faculty at Washington University, advanced several molecules to the clinic, and authored 100 research papers and 4 patents.