The process of bringing innovative medicines to market has become increasingly more difficult and complex in the last decade. More rigorous regulatory requirements coupled with restrictive policies for drug reimbursement have slowed down the rate with which major pharmaceutical companies are able to reach patient populations with new molecules.

Some recent evaluations point that it takes on average 14 years to bring a compound from discovery to approval with an average cost of US$ 1.2 billion. Within these constraints, drug development programmes have begun including Patient Reported Outcomes (PROs) at early phases to explore opportunities for demonstrating product benefit in addition to well-established clinical markers assessed directly by physicians or diagnostic tests. PROs bring a very diverse perspective on medication benefit as perceived by the patient and thus offer a host of opportunities to substantiate the value of medicines. In order to be credible as evidence and acceptable to regulatory authorities, the process of selection, validation and administration of PROs in Clinical Trials (CTs) has to be carefully planned and executed.

Why use PROs in medical product development?
PROs bring a very enticing proposition to the clinical research front by allowing patients to provide additional confirmation of treatment benefit. Some treatment effects are known only to the patient and cannot be captured through formal clinical assessments. For example, pain intensity and pain relief are symptomatic measures reported by the patient and used in the development of analgesic products. Other aspects of assessing the impact of a medication, such as capturing treatment satisfaction or preference for one type of drug administration versus other, are also solely based on patient input. PRO measures can also augment clinical and psychological measures by providing evidence for patient improvement that does not necessarily correlate with clinical measures. Finally, the significance of PROs in capturing changes in patient’s functioning and quality of life deserves attention as they are often used as a proxy measure in health economic modelling. These are just a few examples of the unique contribution of PROs.

Linguistic validation
PROs are often developed in English and need to be translated in other languages before they are used. There are accepted standards for PRO translation, commonly referred to as linguistic validation. Standard practice includes four main steps:

Logistics of linguistic validation in Asia
A number of studies today are carried out in multiple countries and have a sponsor located in North America or Western Europe. Clinical trials in Asia, for example, would require a longer lead time to prepare the necessary linguistic validations. Asian countries typically have multiple dialects and identifying the appropriate language for the target PRO(s) will depend on site location and feasibility assessment. It is important to start planning early when these languages fall in the “rare” group and when linguistic experts may not be easily available in the country where the sponsor is located. Finally, respondent testing and cultural validation may require travelling to a remote location. Given the wide use of PROs in CTs, some widely used instruments have translations in many languages available on specialised websites, such as: www.proqolid.org, www.olga.org. The EuroQol EQ-5D questionnaire, for example has currently 83 official language versions.

The choice of a PRO administration method should take into consideration cultural and ethnical specifics of patients to be enrolled in the trial. Important consideration of the method of administration of the PRO include: level of literacy of the subjects (interviewer-administered version is better for low literacy subjects), access to telephone or Internet (assessments via phone would not be possible in many cases), the presence of a large extended family who may bias the patient’s response if the questionnaire is completed at home. In the scenarios described above, a preferred approach has been investment in training site staff members in the patient interview process. This approach secures consistent PRO administration over multiple protocol visits, allows patients to develop relationship of trust, and avoids the use of telephone, Internet and other media, as well as possible literacy issues. 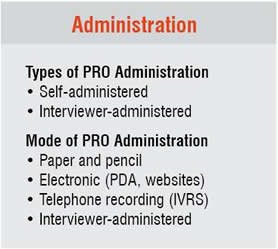 What makes PROs so special? – A case study from Asia, Latin America and Middle East
When eliciting patient response using PROs, CT sponsors need to be aware of the impact culture, social norms, religion, health system, and social class among others, can play on the outcomes. Subjects living in different countries report differences in health status perception as measured by the EuroQol-5D questionnaire. This variability in subjective assessments is well pronounced in multi-country trials, especially those conducted across continents. Below we review an example from a randomised clinical trial conducted in patients with painful Diabetic Peripheral Neuropathy (DPN) in Asia, Latin America and the Middle East.

Case Study
The burden of painful DPN is a common complication of diabetes. The objective of this study was to expand on the human burden of painful DPN by quantifying the functional and health status impairment among international patients from a randomised, double-blind, placebo-controlled trial. The trial was conducted in 19 countries across three regions of the world; Asia, Latin America, and the Middle East (Figure 1). Seven countries or 40 per cent of the study population was from Asia.

A total of 401 patients met the study eligibility criteria and had baseline data collected. Of these, 163 patients were from Asia. The demographic characteristics of the study population (Table 1) reveal that Asian patients had a lower per cent of females, lower Body Mass Index (BMI) and a shorter duration of DPN.

Mood was assessed using the Hospital Anxiety and Depression Scale (HADS), which consists of seven items contributing to an anxiety subscale and another seven to a depression subscale. On a scale of 0-21, patients reporting 0-7 are categorised as normal, 8-10 mild, 11-14 moderate and 15-21 severe. While most patients reported mild levels of anxiety and depression, Asian patients reported the lowest levels of the three regions (Figure 3).

Patients with painful DPN commonly experience sleep problems and the Medical Outcomes Study (MOS) Sleep Scale was completed by patients to assess sleep. The MOS Sleep Scale is a 12-item measure that produces six subscales in addition to a 9-item Sleep Problems Index. Comparing subjects from Asia, Latin America, and the Middle East to general population norms in the US (Figure 4), it is apparent that DPN patients have higher scores (0-100 range, higher scores indicate more of the problem) or greater sleep impairment than the US population. Scores were comparable to a separate US study in DPN patients, suggesting the difference is not due to cultural differences between the US and abroad. Again, Asian patients tended to report lower levels of sleep disturbance of the three regions although still well above general population norms.

Health status of patients was examined using the EQ-5D, a well-established self-report measure consisting of five items that assess the level of difficulty for five domains; mobility, self-care, usual activities, pain/discomfort, and anxiety/depression. The EQ-5D also includes a Visual Analog Scale (VAS) that assesses patients’ perceptions of their overall health status (0-100 range, 0=worst imaginable health state, 100=best imaginable health state). Scores for patients with painful DPN were consistently lower than those reported for the general population of Japan or the UK. More importantly, Asians perceived their overall current health status to be better than those patients in the other two regions.

Factors that may influence lower scores include lower BMI and shorter duration of illness in Asian patients. Cultural differences may also contribute to patients’ perceptions, beliefs and coping strategies regarding pain and health perception. Instrument differences may also play a role in how patients rate the relative importance of quality of life measures. 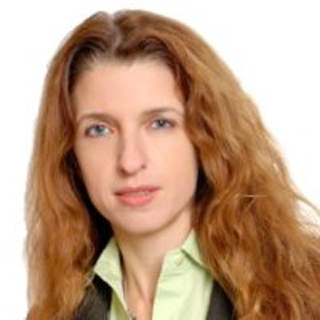 Gergana Zlateva is currently the Team Leader for the Lyrica Outcomes Research team at Pfizer. She holds a PhD in Economics from Fordham University, NY and a BA and MPA from Southern Illinois University, USA.

Alesia Sadosky supports Lyrica’s pain indications in Outcomes Research at Pfizer. She holds a PhD in Biological Chemistry from Penn State’s College of Medicine, completed a postdoctoral fellowship and MPH from Columbia University and holds an MBA in Finance from the University of Connecticut.