The direct replacement of the unrearranged genomic DNA encoding in the variable regions of the mouse heavy and kappa light chain with the equivalent human genomic sequences creates a more efficient platform for the discovery of antibody therapeutics.

Antibody therapeutics are one of the fastest-growing drug classes and take advantage of the endogenous immune system for the creation of novel therapeutics. Antibodies are superior drug candidates because they are a natural constituent of the human immune response, and possess many important favourable pharmacologic qualities, such as half-life, tolerability, safety, specificity and versatility. The development of hybridoma technology by Kohler and Milstein opened the door to the use of antibodies in the prevention and treatment of human disease. However, the use of mouse monoclonal antibodies as drugs is limited by the immunogenicity of mouse proteins in humans, essentially allowing for only acute, single-use applications.

The issue of immunogenicity spurred further improvements in antibody technologies. Initial attempts to reduce immunogenicity were accomplished by grafting murine variable regions onto human constant regions creating “chimeric” antibodies. Studies of variable region structure and function helped in further refining efforts to reduce immunogenicity by identifying those elements critical for antigen recognition and binding, termed “Complementarity Determining Regions” or “CDRs”. By transferring only the CDR residues (or even just key sub-residues within the CDR) of the mouse variable regions critical for antigen binding to similar positions with a highly-related human variable sequence, a novel antibody is created with minimal amounts of mouse sequence. These types of engineering efforts greatly reduced, but did not necessarily eliminate, the immunogenicity of antibodies and allowed their effective use as drugs. Nevertheless, ongoing concerns about immunogenicity and the expertise and resources required to engineer novel antibody molecules encouraged the further exploration of technologies for the production of fully-human antibodies.

Phage display was developed to utilise genuine human variable libraries to quickly identify fully-human antibodies for use as drugs in vitro. Ease and speed of use made display technologies attractive for drug discovery. By using fully-human sequences to generate libraries from which to identify desirable therapeutics, it would appear that many of the issues of immunogenicity are addressed. However, display technologies typically require in vitro affinity maturation, which creates the risk of introducing immunogenic sequences. Furthermore, proteins identified in a prokaryotic system are not necessarily optimal for manufacturing and purification as full antibodies in mammalian cell lines. Issues with protein expression, aggregation, and degradation have all been noted.

Although effective fully-human antibodies have been cloned from humans, this approach requires prior exposure of the patient to the antigen of interest. Attempts to develop fully-human antibodies from mice engrafted with human hematopoietic cells, or in vitro with antigen-primer human cells, have not yielded reliable results.

Ideally, production of antibodies in response to exogenously provided antigen in a normal humoral system in vivo would have the greatest potential to generate antibodies with low immunogenicity in humans. Towards this end, several groups such as Medarex, Abgenix and Kirin, had engineered mice to produce fully-human antibodies in vivo. This was accomplished by disrupting the endogenous mouse immunoglobulin (Ig) genes and introducing either Yeast Artificial Chromosomes (YACs) bearing a portion of the unrearranged human Ig heavy and kappa light chain loci (Medarex and Abgenix), or chromosomal fragments bearing the intact human Ig loci (Kirin). Therefore, immunisation of these mice would yield fully-human antibodies for therapeutic use.

Use of mice to generate fully-human antibodies addresses many of the concerns about immunogenicity and affinity maturation. However, published data regarding the function of ‘HuMab’ mice shows that still there are issues that need to be addressed. For example, B-cell development and peripheral B-cell populations are substantially reduced in HuMab mice which exhibit reduced levels of serum Ig. Furthermore, aberrant Ig bearing murine constant regions are observed, suggesting transchromosomal rearrangements or splicing events. Therefore, the humoral responses in HuMab mice may be less efficient than normal mice. While effective antibody therapeutics have been generated using HuMab mice, there is still room for improvement.

Regeneron has created a more efficient platform for the discovery of antibody therapeutics through the use of VelociGene technology, a proprietary, high-throughput process using automated systems to make virtually any genetic modification in mouse Embryonic Stem (ES) cells. The speed and precision of VelociGene technology permits the direct exchange of large (100-200 kilobase) genomic DNA sequences in situ, allowing the manipulation of complex genomic loci in murine ES cells.

Scientists at Regeneron recognised that antibodies are an active participant in the humoral response, which require efficient signalling through the B-cell receptor, accurate regulation by positive and negative coreceptors, and, perhaps most importantly, productive interactions with Fc receptors and similar constant region recognition elements. Therefore, use of human constant regions, as in the HuMab approaches, may yield less efficient humoral responses to some antigens. Furthermore, the use of YAC or human chromosomal fragments in murine cells may have the added risk of inaccurate gene regulation through human enhancers or locus control regions and instability in transmission.

The Regeneron solution to these issues was the direct and precise replacement of the unrearranged genomic DNA encoding in the variable regions of the mouse heavy and kappa light chain loci with the equivalent human genomic sequences. Therefore, the resulting Ig loci encode antibodies possessing fully-human variable regions linked to murine constant regions utilising the genuine murine expression control mechanisms. This approach overcomes the issues presented by HuMab mouse platforms while taking advantage of the superiority of a natural humoral response for the production of antibody therapeutics.

At various steps in the creation of the humanised Ig loci, ES cells were microinjected and tested for their ability to generate mice and the function of the engineered Ig loci. Mice homozygous for humanised Ig heavy chain loci possessing just three variable segments (and all DH and JH segments) were observed to have completely normal immune systems, with normal B-cell populations, serum Ig, and, most importantly, normal antigenic responses. These results indicate that replacement of only the Ig variable loci in situ, while maintaining all the mouse constant regions and expression control regions (known or unknown), does indeed recreate a normal humoral response in mice.

Essentially the entire human Ig heavy and kappa light chain variable repertoire has been integrated into ES cells. The resulting genomic loci are stable throughout multiple generations of VelocImmune mice and have been shown to be used productively, generating antibodies of diverse fully-human variable sequences. Direct comparisons between VelocImmune mice and wild-type littermates demonstrate nearly identical responses to immunisation, regardless of the number of human variable segments the VelocImmune mice possess. High affinity therapeutic antibodies have been generated to many different antigens utilising standard hybridoma and cloning techniques, further highlighting the speed and efficiency of VelocImmune technology.

Despite the fact that the antibodies produced by VelocImmune mice possess mouse constant regions, Regeneron scientists have developed high-throughput methods for the joining of desired variable regions to human constant regions of any type, and the subsequent insertion into mammalian production lines to create fully-human antibodies. Because of the modular nature of antibody variable domains, specificity and affinity are maintained whether on mouse or human constant regions. Thus, the advantage of producing antibodies in vivo possessing human variable regions joined to mouse constant regions does not create any problem for the creation of fully-human antibody therapeutics.

Regeneron has used VelocImmune technology to create a broad pipeline of antibody therapeutics to a variety of targets. REGN88, directed against human interleukin 6 (IL6) receptor, is Regeneron’s first fully-human antibody in clinical trials for the treatment of rheumatoid arthritis. 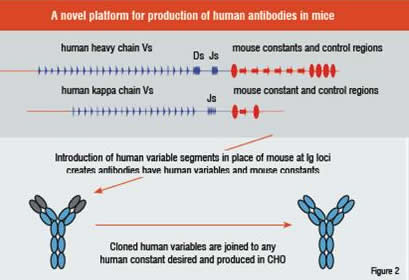 VelocImmune is a novel platform for the production of fully-human therapeutic antibodies in vivo. Unlike other technological platforms, VelocImmune mice take advantage of the normal murine humoral response to create high affinity therapeutic antibodies that do not require additional engineering to drug characteristics. In contrast to HuMab mouse technologies, VelocImmune mice utilise the authentic murine loci and expression control regions for accurate regulation and antibody production, and through the use of genuine murine constant regions, reproduce a humoral immune system indistinguishable from wild-type mice. Therefore, VelocImmune mice represent a major step forward in the production of fully-human antibody therapeutics in vivo. 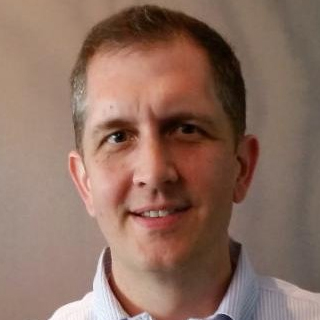 Sean Stevens is Associate Director of Technology Assessment at Regeneron ?Pharmaceuticals, where he was co-creator of the VelocImmune mouse and helped ?develop multiple antibody programs.