Personalising Prescription is a sub-set of the Personalised Medicine concept. Both the concepts were always in practise while the gene and cellular technological advances have made them sound fancier. There are common, complex diseases like cancers; the diseases for which there are no single underlying target like psychiatric conditions; the diseases that are rare like Orphan categories; the oral diseases that are at the helm of integrated treatment approaches. The personalisation happens both at the disease and patient level while the factors to be considered are genetic, environmental and personal variables for prescription.

The finale of the 20th century brought fresh hopes of a revolution in medicine based on advancing knowledge of the human genome decoded. The Human Genome Project was possible due to swift advances in genetic technologies that made possible the parallel testing of many Single Nucleotide Polymorphisms (SNP) in a cost effective manner. The beginning of these technological advances led to a Science journal editorial comment in 1997 that defined personalised prescription as tailoring drugs to a patient's genetic makeup and predicted that personalised prescription would become a reality in clinical practice. The discovery of induced Pluripotent Stem Cells (iPSC) has revolutionised some of the concepts in personalising and precision components of Medicine 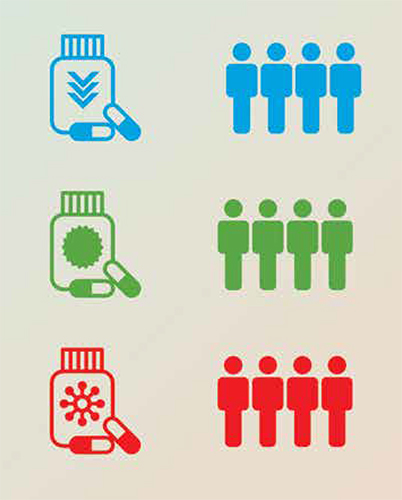 A personalised prescription includes not only the use of new tests, that may or may not be pharmacogenetic tests, but also the concerns of all scientific information valid for prescribing medication. For a comprehensive view of personalised prescription, clinicians are expected to consider genetic, environmental, and personal variables when prescribing any medication. Known important genetic variables in specific drug response can be explored using pharmacogenetics; environmental variables such as co-medication, supplements, foods, beverages, and smoking etc for some drugs; and personal factors such as age, gender or medical illnesses (renal or hepatic insufficiency) as crucial personal variables in the response to some other drugs.

To apply personalised prescription in clinical practice requires a thorough understanding of the pharmacokinetic and pharmacodynamic principles of psychiatric drugs and does not depend on new developments in pharmacogenomic or other biomarker testing. It appears to require only that sophisticated clinicians understand that genetic, environmental or personal variables influence pharmacokinetic and pharmacodynamic response; the therapeutic window of the drug to be taken into consideration. Blood levels, called therapeutic drug monitoring, have been used by psychiatrists to personalise dosing for lithium, tricyclic antidepressants and some antipsychotics including clozapine in the past. Risperidone prescription is the best known example with genetic, environmental and personal variations reviewed in clinical practice.

For those with a rare disease and for which there is no targeted drug available, almost any medicine is personalised. Whatever drugs or treatments they take are to alleviate the symptoms with better or combination of drugs. In some cases genome sequencing, iPSC technology incorporated in personalising prescription are next generation in nature with scope to offer cures for patient segments who are neglected by the pharma research. Muscular Dystrophy (MD) is a neuromuscular degenerative disorder, is one such Orphan disease category that afflicts individuals of different age, race, and gender. MD is a group of rare hereditary muscle diseases characterised by progressive skeletal muscle weakness. There is no traditional small molecule targeted drug based treatment available to the Physicians to prescribe till date. Using some of the drug test endpoints like cell viability, apoptosis, creatine kinase secretion and dystrophin levels on patient’s sourced iPSC platforms in the labs, the drug’s suitability can be ascertained for the particular patient. Another area of therapy that is considered in personalising is how the physiology of muscle pathology will interact with these therapies and a precision approach with tailored physical activity is likely to benefit individual patients.

Personalised Prescription In and For Oncology

There is significant ongoing effort by a large cross section of the medical and research fraternity, across the globe, to work with Cryopreserved Adult Healthy Stem Cells to develop highly Personalised Prescriptions, specifically tailored for, both, lifestyle enhancements and specific ailments/diseases, even the chronic ones for each individual. The individual's Whole Exome/Genome Map is becoming an essential detail to better plan for Personalised Prescriptions.

There is significant ongoing effort by a large cross section of the medical and research fraternity, across the globe, to work with Cryopreserved Adult Healthy Stem Cells to develop highly Personalised Prescriptions, specifically tailored for, both, lifestyle enhancements and specific ailments/diseases, even the chronic ones for each individual. The individual's Whole Exome/Genome Map is becoming an essential detail to better plan for Personalised Prescriptions.

There is a distinct lowering of age limit at which chronic diseases have started to impact the general population. A range of diseases resulting from stressful lifestyle, pollution and general degradation of living standards are agnostic of age, geography, race and even social class and levels. Stem cells are integral to Personalised Prescriptions for quite a few of such diseases, such as Autologous and Allogeneic procedures for HSCT - Hematopoietic Stem Cell Treatment for cancers impacting the blood cells. The recent advancements enable Precise Cell Selection from the patient's own Peripheral Blood Stem Cells (PBSC) or Bone Marrow (BMT) and even Umbilical Cord Blood (UCBSC) for an autologous procedure, which has a much higher probability of the body accepting the infusion of healthy stem cell selection and minimised occurrence of GVHD - Graft vs Host Disease, post-transplant. In fact, there is a preference for cryostorage of a patient's healthy stem cells much earlier in the treatment regime, before chemotherapy or any other such procedure which may render the patient's own healthy stem cell unfit for use at a later date. An Autologous procedure also reduces the need to find a donor and definitely reduces the total cost and time for the treatment. In the event, Allogeneic procedure is necessitated, Personalised approach would prefer opting for PBSC of the Donor instead of bone marrow as a source, along with procedures to derive the necessary cell selection to reduce occurrence of GVHD post transplantation.

Below are a few examples to get a glimpse of how research is unravelling newer molecular targets that are promising personalised oral health care in the near future.

Head and Neck Squamous Cell Carcinoma (HNSCC) is a disease with complex gene alterations. These alterations result either in shutting down or amplification of regulatory signals within a cell that accelerates cellular growth giving rise to tumours. Current treatment options for HNSCC include surgery and cytotoxic therapies. Most of these treatment strategies result in drastic reduction of the quality of life of the patient. Better understanding of the biological heterogeneity of head and neck cancer will help customise treatment and optimise outcomes for this malignancy. Cancer management has long focused on care based on tumour stage, subtype, and histology. Knowledge obtained with the help of genomic technologies offers a scope for a more refined tumour classification based on signalling pathways that can be targeted more precisely. Molecularly targeted therapies developed and tested for use HNSCC are namely include EGFR -directed drugs like cetuximab and EGFR - tyrosine kinase inhibitors namely gefitinib, lapatinib, erlotinib is being used for targeted therapies for HNSCC.

Individual genetic variation in Cytochrome P 450 superfamily of enzymes is known to be involved in the metabolism and bioactivation of most of the drugs. People with a certain allelic variation of CYPD26 gene are unable to convert codeine to morphine. So these groups of people experience insufficient analgesia but they are able to withstand many of the adverse side effects associated with opioids. On the other hand, morphine intoxication is observed in individuals with multiple copies of CYP2D6 because of extremely rapid metabolism of codeine. Interindividual differences in response to anesthetics such as isofurane, halothane and fentanyl are produced due to variants in CYP2E1 and OPRM1 genes.

Thus, dentists would be able to customise safer and more effective peri-operative and post-operative pain management by identifying and monitoring such individual genetic variation.

Another important area of concern of chronic Orofacial pain management is TMD or temporo mandibular joint disorders. Identification of genetic variations in an individual’s pain perception can offer clues about susceptibility to TMD. This information will be beneficial to segregate individuals most susceptible to developing chronic TMD and early treatment strategies can be designed for them. One example of such an approach is the Orofacial Pain: Prospective Evaluation and Risk Assessment (OPPERA) study which is the most comprehensive analysis till date.

Genomic approaches have revealed several interesting information about genomes of oral pathogens involved in the progression of common oral infectious diseases such as dental caries and periodontal disease. A noteworthy example is the Human Oral Microbiome Database (HOMD) which is an assembly of almost 1000 predominant microorganisms that inhabit oral tissues. This has opened up a new arena of early intervention tactics to the development of novel strategies for oral polymicrobial disease diagnosis, prevention and treatment. For instance, a new bacterial species, Scardovia wiggsiae was identified through HOMD project. This bacteria is a potential pathogenic indicator for early childhood caries risk. Thus, information about this microorganism and similar findings about additional pathogens drive the decision of a successful treatment strategy that may call for a change in the diet pattern as well as microbiota. Several Genome Wide Association Studies (GWAS) findings from dental caries investigations have identified specific caries susceptibility loci and related information. An interesting example is about the TAS2R38 and TAS1R2 genes that mediate taste sensation. Some individuals with variations in these two genes have been shown to be more predisposed to eat cariogenic food choices that automatically makes them potential candidates for dental caries.

Dental signature of every individual is unique and while dentistry has also many oral treatments which are generic and applicable for the vast majority of the population, the advancements in the field have made the need for Personalised Prescriptions move up from being a value add to being inherent to the field of dentistry itself. One such example is the use of Stem Cells Extract (SCE) to enable regenerative recovery after a Tooth Implant procedure. A typical tooth implant is a Bio-inert external item, however, the use of SCE makes the same Tooth Implant to become Bio-Active offering regenerative capabilities, reducing the sense of pain and aiding recovery in much less time. Stem Cell Extract is fast on its way to become an integral part of every Personalised Prescription for Tooth Implant and it has the potential to be included in any dental surgical procedure because of its regenerative properties.

The integration of genomics and cellbased technologies into routine clinical practice comes with its own challenges. Few of the barriers which calls for a thought to find strategies to overcome are:

To overcome present and future challenges, the authors feel that the first step should be to engage in a dialogue focused on preparing next generation clinicians, researchers and educators; upgrading the knowledge base of current health professionals through interdisciplinary training and skill sets; adopt, practise and build credibility in the space. 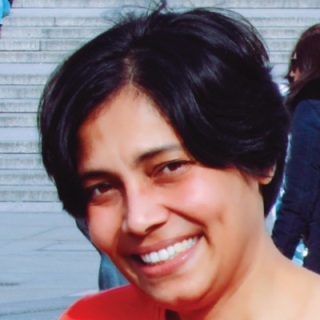 Subhadra Dravida is the Founder and CEO of Transcell Biologics (www.transcellbio.science) that is into translating adult stem cell technology prowess into real time applications 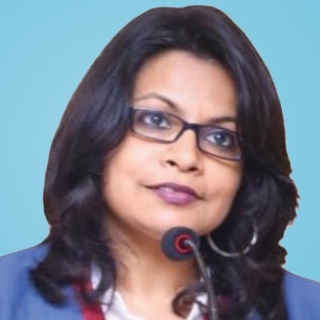 Gargi Roy Goswami is the Founder and Director of KROYNAS Private Limited, India (www.genedent.com) focused on education and training to support translation of research into clinical applications in the domain of Dental Genetics and Saliva Diagnostics. 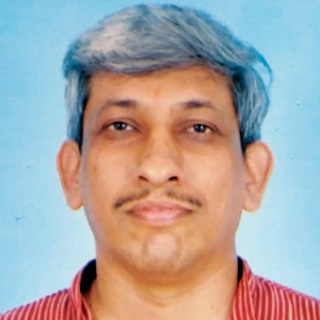 Rajiv Gupta is an Entrepreneur; Managing Partner at Lateral Consulting