Trifunctional antibodies represent promising new cancer therapeutics based on a unique mode of action. The first drug candidate catumaxomab showed strong anti-tumour efficacy in a pivotal phase II / III trial in advanced cancer patients. The clinically relevant primary and several other secondary endpoints were reached with high statistical significance resulting in a clear clinical benefit for the patients. Thus, the expected European market approval for catumaxomab will mark a prominent milestone in the development of bispecific antibodies per se.

Triomab® antibodies represent a new generation of antibodies that incorporate a novel mechanism for the treatment of cancer. Trifunctional antibody chimaeras consist of light and heavy chains originating from parental mouse IgG2a and rat IgG2b monoclonal antibodies each with different antigen binding properties:

• One binding site for the interaction with tumour-associated antigens (TAA) like EpCAM and HER2/neu or CD20 on appropriate tumour target cells like carcinomas or lymphomas, respectively;
• The other binding site for CD3 recognition on polyclonal T lymphocytes; and
• Finally, the intact Fc region with its functional binding features for activating Fc? receptor type I (CD64)-, IIa (CD32a)- and III (CD16)- expressed on accessory cells.

Importantly, this chimeric mouse / rat Fc portion does not or only marginally bind to the inhibitory receptor Fc?RIIb e.g. on B lymphocytes and platelets.

In contrast, most of the approved therapeutic antibodies exert their anti-tumour efficacy via antibody-dependent cellular cytotoxicity (ADCC) evoked by Fc?R-binding on accessory cells alone.

Taken together, as immunotherapeutic, success critically depends on the number of recruitable effector cells at the site of tumour growth, the triomab® antibody format utilises different cellular defence pathways leading to enhanced elimination of malignant cells.

Ideally, the triomab® antibody configuration enables the formation of tri-cell complex composed of three cell types: tumour cell, T-cell and accessory cell like monocytes, macrophages, natural killer or dendritic cells. The juxtaposition of polyclonal T-cells and accessory cells within these complexes promote the co-stimulation and synchronous activation of both effector cells in the close vicinity to tumour cells. Co-ordinated signalling events required for efficient tumour cell destruction are induced subsequently. As a final result, the tumour target cells are simultaneously subjected to a variety of immune effector mechanisms regulating destructive processes, such as phagocytosis and perforin-mediated necrosis.

One of the important hallmarks of triomab® therapeutics is described by the efficient dose-response profile. Already four intraperitoneal catumaxomab infusions of 10, 20, 50, 150 µg within 11 days sufficed for clinical benefit against Malignant Ascites (MA) in a pivotal phase II / III study. In vitro, this favourable dose-response relationship of triomab® products at ng/ml concentrations is best documented by the efficient capacity to mediate lysis of tumour cells even with low surface density of the target antigen.

For the induction and maintenance of an efficacious anti-tumour response, the pro-inflammatory cytokine milieu (e.g. interferon-?, interleukin (IL)-1, IL-6, IL-12 and tumour necrosis factor-?) stimulated by triomab® antibodies is especially important. By secretion of IL-2 the self-supporting maintenance of the immune response is provided without the need for further co- or restimulation in vivo (e.g. w/o additional administration of IL-2). All these specific triomab® properties are aided by the reasonable pharmacokinetic and toxicological profile of these antibodies (e.g. slow renal clearance rate and avoidance of severe adverse events such as a devastating ‘cytokine storm’).

Remarkably, the activation of monocytes, macrophages and dendritic cells with subsequent phagocytosis of tumour cells is a prerequisite for the induction of an anti-tumour immunity and links thereby passive to active immunisation. Thus, secondary humoral and cell-mediated immune responses are raised even against TAA different from the antigen targeted by the therapeutic antibody. These active in situ immunisation events highlight the underlying therapeutic opportunities as long-standing anti-tumour responses could be induced. Consistently, preliminary analysis of autologous antibodies in sera from head and neck carcinoma patients resulted in 6-fold increased humoral anti-tumour IgG3 titres lasting longer than three months after catumaxomab therapy. Thus, triomab® antibody therapy has the capacity to immunise patients specifically against their own primary tumours.

In summary, triomab® tumour destruction is mediated both by targeted anti-tumour cytotoxicity and the
co-ordinated induction of innate, humoral and cell-mediated immune responses.

First triomab® pivotal study – Anti-EpCAM x anti-CD3 catumaxomab
Based on these structural and therapeutic features one important candidate of the triomab® family catumaxomab represents the first bispecific anti-tumour antibody per se that clearly meets its expected clinical endpoints in a pivotal phase II / III study. Due to the high medical need, patients suffering from malignant ascites received priority in the clinic development programme for catumaxomab of our partner Fresenius Biotech. Malignant ascites is a manifestation of an advanced disease in a variety of indications like ovarian, breast or gastric cancer and is characterised by strong fluid influx and tumour growth into the peritoneal cavity. The onset and progression of MA is associated with significant morbidity and deterioration in quality of life. The prognosis of MA patients is generally poor. The median survival following diagnosis of ascites varies from 75 days (non-ovarian) up to 7-12 months (ovarian).

Briefly, more than 250 patients suffering from epithelial ovarian cancer or non-ovarian cancer with confirmed EpCAM+ MA were enrolled and randomised to catumaxomab treatment (one paracentesis plus four subsequent intraperitoneal infusions of 10, 20, 50, 150 µg within 11 days) or to control intervention (paracentesis alone as best supportive care). Puncture-free survival was defined as the primary endpoint of the pivotal clinical trial. With 46 days for catumaxomab therapy versus 11 days for control treatment the median of puncture-free survival reached high statistical significance (P<0> 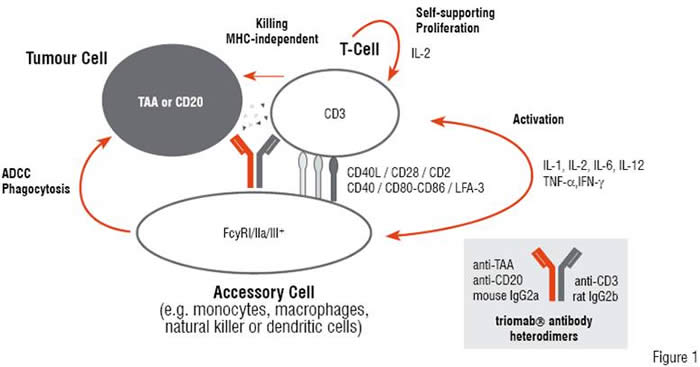 Briefly, consistent with the danger model self-tolerance is acquired through reduction of the relative immunogenicity of self-antigens like the idiotype of a B cell or other TAA, whereas foreign antigens like microbial proteins, typically not presented during induction of deletional tolerance in the thymus, retain a high degree of relative immunogenicity such as in case of the foreign triomab® antibodies. Thus, TAA that are not prominently presented in deletional tolerance likewise retain a high relative immunogenicity and remain essentially foreign. Accordingly, any given TAA auto-antigen can attain a high level of relative immunogenicity, provided that it is presented at sufficiently high levels accompanied in a pro-inflammatory micro-environment. Catumaxomab and other triomab® antibodies induce this beneficial Th1-biased cytokine milieu with the release of IFN-?, IL-2 and IL-12 for the priming of long-lasting tumour defence mechanisms by (i) their per se foreignness and by (ii) their anti-CD3 and anti-Fc?R engagement leading to phagocytosis of tumour cells.

Other bispecific antibody approaches
As the biopharmaceutical manufacturing of bispecific antibody represents a real challenge, many different antibody formats have evolved along the progress in recombinant protein expression. In contrast to trifunctional triomab® antibodies produced by quadromas (hybrid-hybridoma cells), nearly all of these recombinant formats lack the Fc region. Due to their small size these antibodies have a short half-life in vivo, thus continuous infusions are usually required to maintain serum antibody concentrations that are central to efficacious anti-tumour responses.

A recombinant bispecific antibody format with IgG-like shape but tetravalent binding specificities for epidermal growth factor receptor (EGFR) and CD3 has been described recently. This Fc region-bearing antibody assembles from two different (scFvA)-CL and (scFvB)-CH1-CH2-CH3 entities due to the preferential interaction of the CL light with the CH1 heavy chain domain of human IgG1 molecules. Therefore, this bispecific antibody represents a homodimeric structure consisting of Fc region and two recognition sites for EGFR and CD3 binding, respectively, on each half-antibody. In vitro killing experiments of tumour cells in the presence of peripheral blood mononuclear cells showed that this tetravalent bispecific antibody format was in the efficacy range of triomab® antibodies. Future preclinical experiments may prove the anti-tumour potency of this promising IgG-like antibody format in vivo. Nevertheless, in terms of clinical development the two anti-CD3 binding sites of this structure bear increasingly the inherent risk of stimulating adverse events such as the ‘cytokine storm’. Taken together, the triomab® antibody catumaxomab with ‘natural’ IgG shape currently represents the only bispecific antibody format that already met therapeutic expectations in a pivotal phase II / III trial.

Future perspectives
Besides the clinical development programme of catumaxomab against EpCAM+ cancer diseases, ertumaxomab treatment of HER2 / neu-expressing breast cancer patients and FBTA05 against B cell malignancies, novel target antigens will be implemented into the triomab® technology platform as e.g. proteoglycans for melanoma. To a certain extent, the further development of the triomab® platform itself e.g. towards antibody chimerisation is conceivable provided that the heterodimeric nature of these antibodies will be retained for certain downstream processing steps. In the light of long-lasting antitumour responses immunomonitoring will be broadened during future clinical trials with triomab® antibodies (e.g. catumaxomab). This surveillance of the immune status will also comprise analysis of CD4+ CD25+ FOXP3+ regulatory T cells and humoral anti-tumour responses. Importantly, as anti-CD3 triggering by triomab® antibodies affect regulatory T cells the behaviour of this T cell subpopuation in context with effector CD4+ and CD8+ T cells may also give a better understanding of this regulatory network behind cell-mediated anti-tumour immunity.

Triomab® Antibody Technology
The triomab® technology is a major step forward in the development of intact bispecific antibodies for cancer therapy. By addressing the CD3 signalling properties together with the stimulatory Fc?R-directed features, efficacious immune effector mechanisms are combined for concerted tumour defence.The implication of Fc?R+ cells has additional impact on stimulating immune responses towards long-lasting anti-tumour immunity.

Furthermore, the utilisation of the heterodimeric structure of the murine / rat Fc region represents an important breakthrough in the manufacturing of these biopharmaceuticals at
industrial scale. 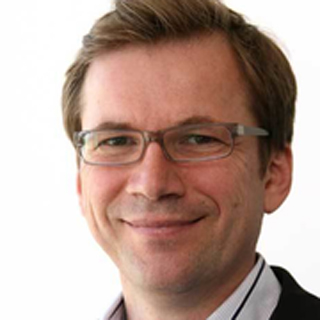 Horst Lindhofer is the founder and CEO of TRION Pharma GmbH. TRION Pharma is a privately held biopharmaceutical company that has established the triomab® approach towards cancer immunotherapy.