Modern manufacturers are facing to produce the perfect, clean label soft gel. Cross-linking is a common reaction in gelatin capsules, with a direct impact on APIs bio availability and opening time. Modern technology offers a number of solutions: Rousselot’s latest development for example, StabiCaps, has been specifically formulated for more stable capsules.

Soft gels, also known as soft capsules or soft caps, are a highly popular pharmaceutical and nutraceutical dosage form, with around 2,500 units consumed every second globally. A forecast by HJR Research predicts a CAGR of 5.5 per cent over the next decade, with the global market value expected to reach $756 billion by 2025. During the same period, the Asia-Pacific region is projected to be the fastest-growing market at a CAGR of 6 per cent, in terms of value. Driven by the increasing popularity of nutraceuticals, where clean label and comfort in swallowing are key factors in customer buying decisions, soft gels have also proven to be the best option for recently-developed,complex and poorly soluble fillings in pharmaceutical products. 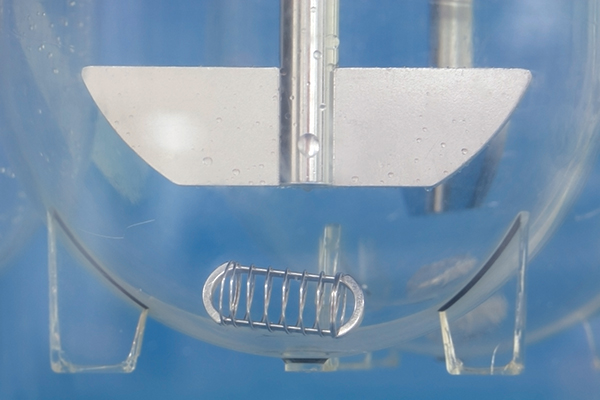 In this article, Claude Capdepon describes the formulation challenges, particularly cross-linking, associated with soft gel manufacturing, and explains the results of Rousselot’s recent research on the behavioural patterns of cross-linking and the development of an advanced gelatin solution for stable capsules.

Robust functional properties, full compatibility with the human body and compliance with stringent regulatory requirements make gelatin the preferred excipient for soft gel applications. In addition, as the only clean label excipient, it provides an added appeal for conscious consumers. However, not all gelatins are equal. Soft gel manufacturing is a complex procedure that requires technical knowledge and excipients with specific characteristics, to avoid the following commonly encountered formulation pitfalls.

There are several factors that impact Active Pharmaceutical (API) ingredient delivery, including the capacity of the shell to dissolve fully and timely. One of the main requirements for soft gels is to protect the API against early degradation while in storage. However, soft gels are particularly sensitive to heat and moisture and loss in shell quality can prevent its proper dissolution. Another specific risk is the movement of components between shell and fill, as well as from the external environment into the shell. If either of both of these conditions occur, capsules are then at risk of becoming unstable and brittle, due to the reaction between the different ingredients. Without adequate protection, the risk of oxidation and recrystallisation increases, lowering the capsule’s overall effectiveness. It is essential therefore not only to use a specific and high-quality gelatin for the shell, but also to strictly control all steps of the production process to achieve the right level of moisture. 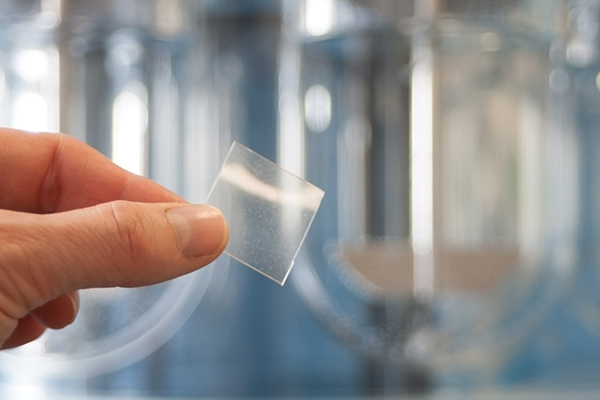 Selecting a gelatin with the right characteristics is particularly important for soft gel formulation in order to avoid any of the typical defects, which include poor encapsulation yield, twins and leakages. The foaming and filming characteristics of the gel mass should be evaluated carefully to maintain high levels of production efficiency and performance. At the same time, when it comes to optimum manufacturing, gelatin must also be highly soluble, easy to use and should exhibit excellent mechanical strength and elasticity properties. Most importantly, the increasing number of APIs being developed means that manufacturers need to take into consideration the interactions that may occur between the shell and the fill when developing new formulations.

For soft gels to remain in perfect conditions throughout their shelf-life, they must undergo a drying process to prevent stickiness. For instance, a Rousselot study performed in 2013 on fish oil formulations demonstrated the effect of final moisture level on softgel capsules, and showed that a moisture level above 11 per cent significantly increases the risk of stickiness.

Safe, non-allergenic and fully compatible pharmaceutical gelatins are now available to help overcome such challenges meet the needs of soft gel manufacturers. Compliant with the highest safety, quality standards and practices, such as IFS, HACCP and GMP, specialised gelatins can help to minimise risk of soft gel defects during manufacture and maximise productivity and save costs, throughout the formulation process. The provision of certified Halal and Kosher gelatin options also creates additional appeal to a diverse range of consumers. 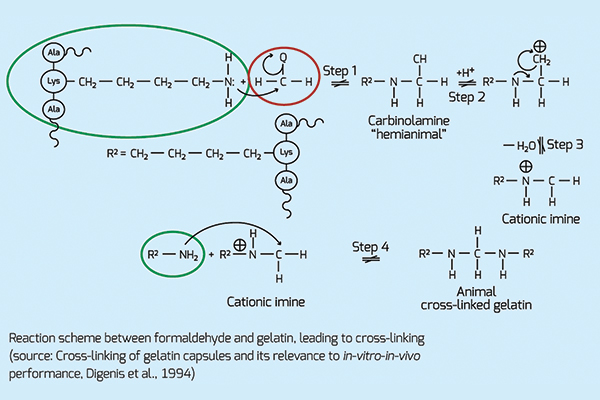 Although essential to produce a high quality soft gel, attention towards all the factors mentioned above might not be enough. The complex nature of soft gel formulation creates some extra challenges even for the most careful of manufacturers, such as crosslinking. But what exactly is it, and how can it be avoided?

Crosslinking is a term used to describe the formation of strong chemical linkages between gelatin chains. It can cause the shell to become rubbery and insoluble, ultimately adversely affecting soft gel stability.

A purified, soluble protein, gelatin is a polydisperse polymer composed of three alpha chains that cross together to form a triple helix. Along with its specific amino acid composition, this predisposes gelatin to crosslinking. Of it 18 amino acids, lysine and arginine are the most reactive, and play a key role in the crosslinking reaction. When manufacturing soft gel capsules, gelatin accounts for 40 to 47 per cent of the total gel mass composition, such a high proportion can bring gelatin’s crosslinking an important concern for soft caps manufacturers. 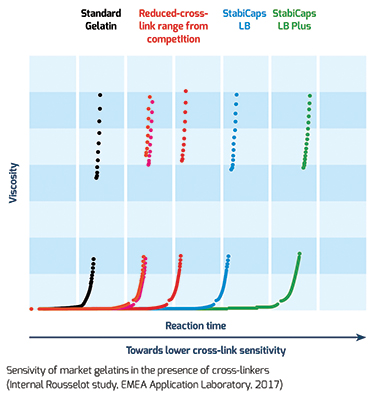 The main factors that are responsible for crosslinking can be grouped into three categories: storage conditions, complex fills and aldehydes.

Temperatures above 30°C and humidity above 60 per cent have been shown to create a chemical reaction called self-crosslinking, where the R chains of arginine and lysine create double covalent bonds between different chains, making the gelatin shell insoluble.

Complex fills, including multivitamins and multi-minerals, can trigger a chemical crosslinking reaction. Over time, crosslinkers tend to migrate towards the shell, forming an insoluble membrane between the fill and the shell. The most reactive components inducing crosslinking are aldehydes. In figure 1, formaldehyde reacts with the amino group of gelatin, forming an imine.

It’s important to mention that the reactions involved are often enhanced by the characteristics of the gelatin: viscosity in relation to molecular weight distribution and pH for example can play a key role when it comes to crosslinking. For this reason, we can assume that by understanding gelatin’s behaviour under specific circumstances, it is possible to predict its resistance to crosslinking.

Rousselot, the leading producer of gelatin and collagen peptides, has developed a specific testing protocol that measures the increase of gelatin viscosity in the presence of crosslinkers. During this predictive test, a gelatin solution is mixed with a crosslinker in order to calculate the reaction time. This test highlights the time it takes the gelatin solution to reach maximum viscosity value and therefore potential to crosslink. The higher the reaction time, the lower its sensitivity to crosslinking. The reaction speed is an additional parameter used to measure sensitivity where a lower reaction speeds corresponds to lower sensitivity. 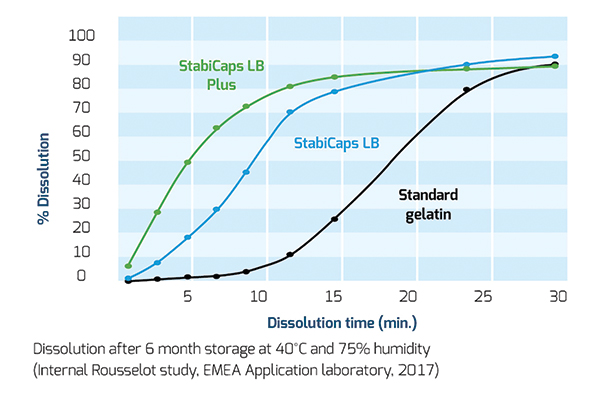 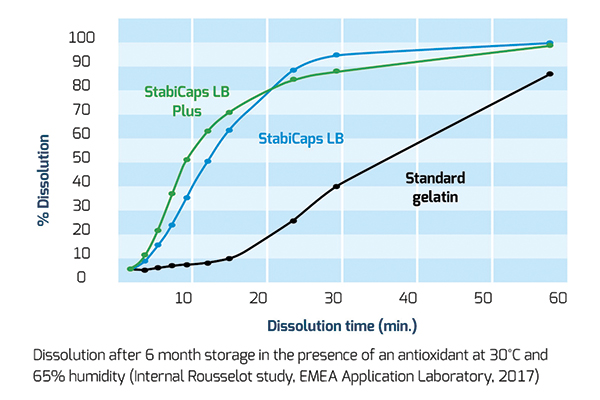 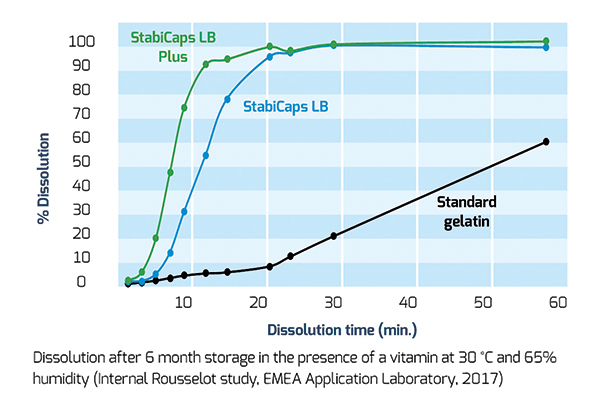 Building on the extensive in-house research mentioned above, Rousselot has developed a range of gelatins with superior performance in terms of soft gel stability and resistance to crosslinking; this patented technology is commercialised under the name StabiCaps.

StabiCaps reaches specific low viscosity profiles and low Ph range in a clean label formulation, to ultimately reduce crosslinking. Additional salts have been added to StabiCaps Plus with the aim to fix any crosslinking residue and avoid the release of amino acid groups.

To evaluate StabiCaps’ performance against other commercially available gelatins, Rousselot Application Lab team carried out a series of comparative tests on several different gelatin types to study their sensitivity in typical crosslinking situations such as the presence of aldehydes, high humidity or high temperature conditions.

Tested in the presence of crosslinkers (including vitamins and antioxidants), StabiCaps outperformed both standard gelatins and other reduced-crosslinking ranges available on the market and showed a significantly longer reaction time.

Stability has also been tested on soft gel films (or gelatin plasticized films) in specific temperature and humidity conditions (40° C and 75 per cent humidity) or in the presence on vitamins or antioxidants (at 30° C and 65 per cent humidity). All dissolution tests were conducted in water at 37° C in a dissolution vessel.

The Most Significant Results have been Described below.

Temperature and humidity: Tests carried out after six months of storage at 40 per cent and 75 per cent have tested the Maillard reaction and shown a significantly faster dissolution rate of StabiCaps compared to a standard gelatin. More specifically, 90 per cent of the capsule film was dissolved in 20 minutes.

The same results were confirmed by tests on StabiCaps and standard gelatin grade after 6 months storage in the presence of cranberry powder or vitamins, a powerful antioxidant, at 30° C and 65 per cent humidity.

In all cases, dissolution occurred at a faster pace than with standard gelatin showing the capacity of StabiCaps range to reduce cross-linking and to effectively enhance API bioavailability.

Rousselot StabiCaps comply with most international pharmaceutical and nutraceutical supplement regulations, including the US and the European pharmacopoeia and edible regulations. 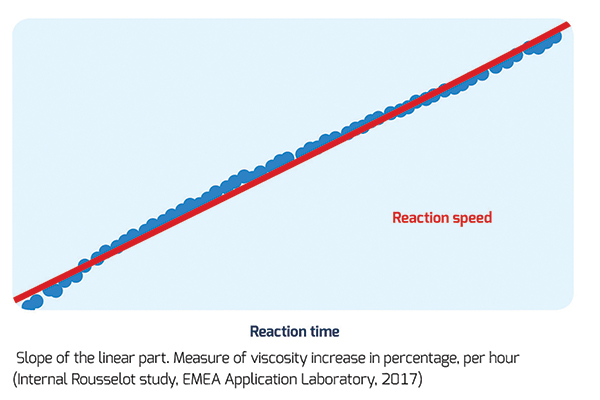 As soft gel consumption grows in the nutra- and pharmaceutical industries, capsule manufacturers increasingly need to balance consumer demand for natural, clean label solutions with increasingly complex fillings and new API technologies. Among all excipients available, gelatin remains the preferred option due to its outstanding functional properties and clean labelling. Any formulation challenges can more easily be overcome by using high quality and consistent gelatins and partnering with experienced suppliers who can provide in-depth technical expertise.

Tests show that best results can be obtained with the use of specific gelatins, optimised against crosslinking. Among these, StabiCaps have demonstrated superior performance in terms of reaction, dissolution time and stability and so make the ideal choice for pharmaceutical soft gel products. 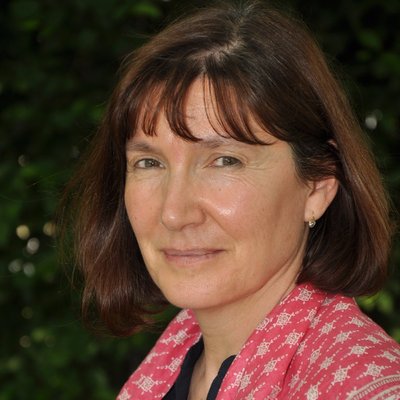 Claude Capdepon specialized in organic chemistry from the University of Montpellier. She started her career in organic chemistry research before moving into photographic and pharmaceutical gelatin developments. Since 2008, Claude has been Application Laboratory Manager at Rousselot overseeing operations in M.E.A., S.E Asia and Japan. She works on the development food, nutritional and pharmaceutical gelatins and collagen peptidesbased applications.