The pharmaceutical industry is facing increasingly severe challenges to its mission of delivering novel therapeutic solutions for unmet medical needs. Today, a heightened focus is being placed on leveraging maximum value from its core asset – information. Continual advances in information technology promise substantial benefits throughout the pipeline, both from the prospects of improving existing business capabilities, and enabling revolutionary new ones. Merck has created a group which focusses on ensuring rapid translation of these IT advances to enable pharmaceutical R&D.

Information-related challenges are pervasive throughout modern drug discovery. They are becoming ever more draconian as the industry leverages powerful new experimental capabilities to create novel therapeutics for unmet medical needs. In parallel, breathtaking advances in Information Technology (IT) make possible effective responses to these challenges and promise the advent of revolutionary business capabilities previously thought to be unachievable. Effectively translating the potential of innovative new IT to deliver novel R&D capabilities requires bridging the gaps between external IT innovators and internal R&D and IT personnel.

At Merck Research Laboratories (MRL), bridging this gap effectively has led to the creation of a new group known as MRL Information Technology Innovation. The group identifies compelling new information technology, and uses its privileged internal knowledge of current and emerging MRL business needs to orchestrate opportunities to apply these new technologies to business challenges in the form of short agile experiments.

In contrast to activities where innovation is directed at the company’s primary product, (for example, where the outcome is an innovative therapeutic agent), novel IT is not itself directly a pharmaceutical industry product. Yet people possessing strong IT skill sets are essential for a deep understanding of the capabilities and potential of new IT. There is a risk, however, of focus on innovative IT which, while compelling to an information technologist, may lead to little or no business value to the company. Mitigation of this risk, which is sometimes known as “technology for technology’s sake,” has led to the development of a formal methodology which is based loosely on the scientific method.

For any initiative involving innovative IT, a hypothesis is developed.

This is a candidate explanation of an existing or anticipated future business challenge or gap. A prediction is then developed of the expected impact of the new IT on the business scenario described in the hypothesis. This is then followed by the design and execution of an experiment to test the prediction.

The explicit separation of the business target (the hypothesis) from the new IT (the prediction) is important because it allows the business targets to be considered without the distracting allure of the new IT. Hence, the business targets can be validated for the internal logical consistency of their explanations independently of considerations of the applicability of the technology. It also affords prioritisation on the basis of the importance of the business target, which drives rational choices between multiple experiments. Focus on business relevance is further enforced by the requirement that an MRL business group commit to participation in the experiment before approval to execute is granted.

Collaborative experimentation encourages risk taking
Experiments are conducted in such a way as to provide enough knowledge to guide evidence-based investment decisions. Typically this involves making baseline observations to quantify the current state, application of the new technology and subsequent measurement of the effects.

To avoid delay from otherwise lengthy planning, experiments are limited to a maximum of three months’ duration. This allows quicker decision-making and encourages wider testing of speculative ideas, particularly those which have the potential for high value, but appear counter-intuitive initially. Moreover, they require relatively minimum investments compared to longer initiatives.

Currently, any systems which are created during an experiment must be decommissioned at the conclusion of the experiment. This removes the burden of planning for any subsequent ongoing maintenance and operations effort. The resources and effort required for this planning would increase barriers to rapid execution and agile testing of new ideas. It also ensures explicit hand off to larger groups possessing delivery expertise in the event of a success. This allows the Technology Innovation group to focus on the exploration of as many new IT opportunities as possible. The potential business partners are made aware, well before the experiment begins, that the aim is only to provide evidence for correct investment decisions and not to immediately deliver IT capability described in the prediction.

This raises a challenge because the typical expectation of a business customer is that they will immediately gain a concrete IT capability in return for the investment of their time. The challenge is addressed by clear initial communication that delivery in the event of a success requires significantly greater supporting capabilities than possible in a short experiment designed only as a “proof of concept”, and as such the decision to invest in those capabilities must be made explicitly as a part of the business’s standard resource allocation process. The motivation for business customers to participate is that they can better plan their future business strategy on the basis of experimentally verified capabilities of new IT.

Risk taking is further encouraged by the visible celebration of “good failures” which are well-executed experiments whose outcomes differ from the expectations described in their predictions. These are celebrated for the subsequent avoidance of cost, time and effort due to an “early kill” happening far in advance of production delivery to a customer for that specific business target. They are also celebrated because they offer a better, evidence-based understanding of the current capabilities and promise inherent in both the new technology and in the external innovator. This sometimes allows alternative applications to be determined for the new technology, or allows a determination of what further investment would need to be made to create the capability of most value.

The knowledge gained may also allow innovative combinations of seemingly unrelated new IT to be identified. Crucially these combinations are rarely visible to the external innovators because the technologies involved have no clear linkage. The insight required to connect them arises only from deep knowledge of emerging business needs combined with an equally deep knowledge of the real capabilities of the technologies.

The experiments are widely collaborative to ensure the greatest cross-disciplinary exposure and evaluation. They involve the complex orchestration of personnel from disparate areas both inside and outside the company. A clear communication plan is created at inception, ensuring broad dissemination of the results. This maximises the chances of value arising in unexpected parts of the company where the correct application becomes apparent only after the experimental outcomes are known.

Wide and open collaboration with business leaders is essential. One surprising consequence arises due to their assumptions about the capabilities of technology. These assumptions arise from common experience of the technology norms of the present day. Furthermore, they are often implicit and therefore unquestioned; leading to the belief that certain capabilities are so totally out of the bounds of possibility that they are unworthy of even the tiniest consideration. However, innovative new technology can make possible radically new business functions of high value, which were previously assumed to be impossible. As business leaders are able to see evidence of the capabilities of new technologies in their own business scenarios through these experiments, they challenge these assumptions, and identify opportunities to realise revolutionary new business capabilities.

The agile creation, execution, and readout of these experiments present a demanding challenge given their short three-month (maximum) duration. Expertise in doing this well is a key differentiated capability of the Technology Innovation group.

During the 18 months of its operation, this group has established the business value of the experimental methodology described above. The agility and risk-taking encouraged by these rapid short experiments where “good failures” are celebrated have proved to be of value to the company and to external partners. Moreover, the benefits of collaborative execution and effective communication have been clearly demonstrated. In addition to these, several other critical success factors have become apparent during the process.

Success has been enabled by members of the Technology Innovation group who have specific skill sets and capabilities. This includes mental agility, strong technology and business skills, which are essential to quick understanding of new business challenges and new technology characteristics. Also critical is a flexible associative mindset which is open enough to visualise novel combinations of new technology. Just as importantly, strong collaborative partnering skills are required, as is a positive mindset where, instead of immediately finding reasons why something will not work, the response is to consider under what circumstances it would work. The acquisition of these skills, mindsets and operational methods by other Merck employees who rotate temporarily through the group creates a legacy of lasting value to the company.

A key success factor is to align experiments with the driving motivations of all of the participants. This approach, which emphasises the strengths of the participants, has been extended fruitfully to the external innovators. During the initial approach to an external innovator, they are asked what it is that they really want, what they wish we should try, and what really drives and excites them. These are then borne in mind when designing the experiment. This is in sharp contrast to their typical interaction with other potential customers, who usually request activity which may be exciting to the customer, but may not necessarily enthuse the innovator. This approach has led to extraordinary performance and commitment, even under challenging conditions, solely because all involved have outperformed in ways which were driven largely by their sheer excitement about the experiment. It has also fostered enduring positive relationships after the experiments have completed, opening doors to greater future value as a result of mutual good will.

Finally, visible and enthusiastic executive sponsorship has been critical because at inception, innovation was largely regarded as discretionary. The group simply could not have delivered any of the positive outcomes described above were it not for the vision, commitment and support of senior Merck leadership. Since the group explicitly does not deliver capability directly, the advocacy of senior leadership is critical for driving a positive outcome through to a realised capability for MRL researchers.

The experimental approach described above has led to the delivery of new capabilities which would not otherwise have been possible. However, much greater value will arise from the extension of this approach.

Beyond immediate application of experimental successes, there is a further more powerful opportunity. Situations may arise where the evidence gathered from a set of disparate experiments can be combined to suggest a powerful new aggregate capability, which can then be realised by appropriate investments in the external innovators. This could lead to the creation of technology with capabilities which exceed by orders of magnitude what is possible today.

Harnessing the continual and extraordinary innovations of the IT industry in this way to yield powerful enabling capabilities holds the enticing promise of enabling the industry to reduce the human suffering that exists due to unmet medical needs. 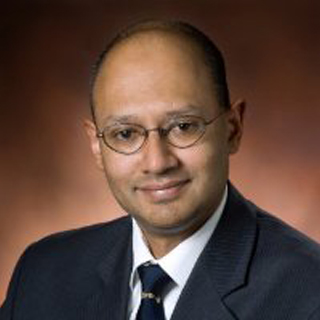 Sanjoy Ray has a PhD in Protein Engineering from Imperial College, London and held a postdoctoral research fellowship in Structural Biophysics at Harvard University. He has 14 years of IT experience, enabling scientific high-performance computing at Boston’s Children’s Hospital and the Whitehead Institute / MIT. He created and currently leads a new information technology innovation group at Merck & Co., Inc.