The words "process control" as related to Active Pharmaceutical Ingredients (APIs) production are interesting. Process can mean anything from simple single-step reactions to very complicated chemistry, multi-step processes and continuous processing, while control implies some state of stability and knowledge of the process and process steps. Upon closer examination of current processes, it is apparent that a typical process control relies heavily on offline testing at the end of each step. The current testing pattern is not effective to control or characterise the chemistry or processes that generate much of the APIs produced. A much more effective control scheme, illustrated here, includes the use of automated PAT techniques. Additionally, as we move through the 21st century, new API entities will be developed using Quality by Design (QbD) techniques generating a higher level of process stability and understanding. This is accomplished in laboratories and small-scale production facilities in a research and development mode. QbD philosophy can be applied to current processes but it entails great effort and expense making QbD ineffective for current production. Current large-scale commercial production of APIs pose their own difficulties and require techniques to ensure the processes continue to perform efficiently, thus PAT. Several PAT automation schemes are illustrated here describing traditional and current automation solutions.

Older PAT techniques such as ph and redox probes generate useful data that is easily interpreted in the form it was generated. Such values were traditionally available as a meter response measuring the electronic potential of a reaction. The output as generated, i.e. millivolts, was easily sent to a computer or process controller via an analogue transmitter. The simplistic nature of the data and analogue transmission does not diminish the usefulness of the application data. The following example of a simple redox application to monitor and control a bromine reduction during critical processing highlights the process knowledge and control gained when using this simple PAT application. 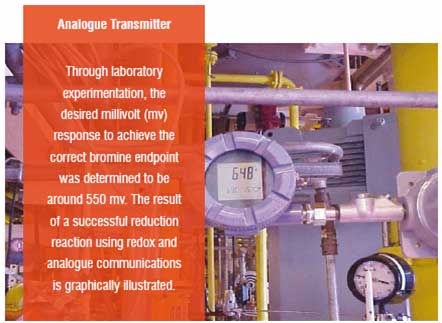 Some variables that could affect the reduction were caused by operational differences such as temperature, raw material weights and tank rinses between batches. For example, if the temperature of the reaction varied upward a few degrees from -10?C, bromine could be lost in the vapour phase. Less bromine would require less sodium meta bisulfite during the reduction reaction. The sodium meta bisulfite is added by standard weight based on the theoretical excess bromine. If the amount of bromine is reduced by one of the variables, the addition of a standard weight of the reducing agent could mean over-reduction of bromine requiring a recharging of bromine and further repeating the sodium meta bisulfite reduction. Losses in efficiency and raw material add unwanted cost to the product. Earlier reaction monitoring was done visually, when the operator thought the reduction was complete and after a standard sodium meta bisulfite charge, a sample was taken for laboratory analysis. Through laboratory experimentation, the desired millivolt (mv) response to achieve the correct bromine endpoint was determined to be around 550 mv. The result of a successful reduction reaction using redox and analogue communications (Figure 2) is graphically illustrated (Graph 1).

PAT used as a tool to gain process knowledge has been firmly established. As modern PAT and process automation became available, it was apparent that PAT could be included in the automation scheme. The theory was simple. Translate the process knowledge developed using PAT into a process control application to improve product quality, then reduce process variation, and increase productivity and product yield. A Near Infra Red (NIR) spectrometer was used to predict percentage of water in a continuous process (Figure 3). Water caused variation and with too much water a competing hydrolysis reaction took place resulting in a reduction of the product yield due to the excessive soluble product losses to the mother liquor. Too little water caused a crystal habit change (small crystals and a thick granulation slurry) causing operation shutdowns and system flushing resulting in a loss of productivity and low yields. The PAT application used chemometrics to predict the water percentage. The water value (as given by Karl Fisher) was sent to an analogue input / output converter as a RS 232 signal. The RS 232 signal was converted to a 4-20 millivolt signal and sent to the process controller. The analogue signal was then placed into a multiple linear regression algorithm to regenerate the predicted Karl Fisher (KF) value from the millivolt signal. The operator could then respond to the KF value as seen at the process controller. The application was further developed to eliminate the human factor. Once the predicted water value was regenerated it was automatically directed to the process controller code that automatically adjusted the span of the water valve (Figure 3). The water valve was effectively controlled by the NIR which predicted water values by automatically opening and closing the valve as required to maintain the correct water content of the reaction. The process control and stability gained (Graph 2) was phenomenal and resulted in higher yields and no productivity loss. 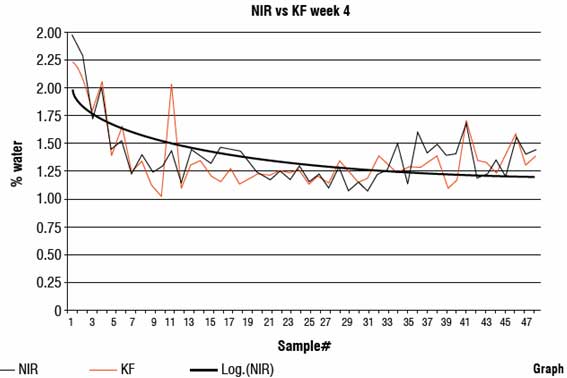 Modern process controllers use Object linked and embedded for Process Control (OPC) communication protocols to communicate with and control process equipment. This two-way communication and process control infrastructure increases compatibility. The latest PAT instruments and software are programmed with OPC capabilities. OPC communications allow predicted values to be sent directly to the modern process controller as generated or predicted. The PAT application is server-based residing on the local area network and can be accessed via the internet and client PCs with proper permissions. The use of PAT, OPC and the process controller results in a broad range of benefits allowing the developer to meet FDA, GMP and 21CFR part11 requirements, such as automated diagnostics and secure data storage thus eliminating the risk of having poor or loss of data. 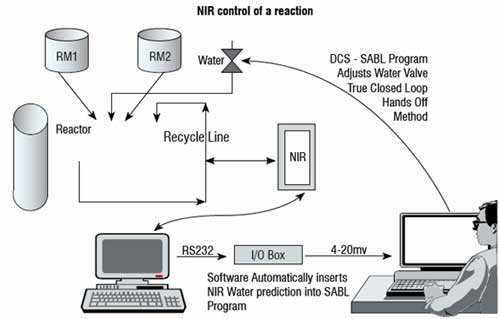 System flexibility extends further to the operation of ancillary devices that may be required for efficient PAT instrument operations. Automation enables the process controller to receive reports concerning the health of the instrument as well as alarms reporting out-of-range results or instrument errors. Additionally, the application of independent software residing on the process controller such as the "Unscrambler software package" (CAMO Software) enhances the PAT system by providing an independent tool to review, statistically evaluate and model data while data collection is being done. The whole system including the PAT instrument, ancillary device control and data evaluation elevates the PAT system to a true process control tool resulting in increased productivity and yield while reducing risk. The holistic system meets the FDA's 21st century definition of PAT for Process Control.

Simple or complicated PAT instruments generate data that can be used to control processes by generating real-time feedback with the automated process controllers using IT and automation solutions thereby enhancing process knowledge and control. PAT generates continuous quality monitoring by measuring "Critical to Process" and "Critical to Quality" attributes (i.e. productivity, yield, over / under reaction and impurity formation) in situ. These facts give the PAT administrator and production supervisors the confidence to process forward prior to completing conventional in-process testing with little or no risk. The modern PAT process interface delivers all the needed elements for a complete, GMP-compliant, modern and effective PAT process control system. 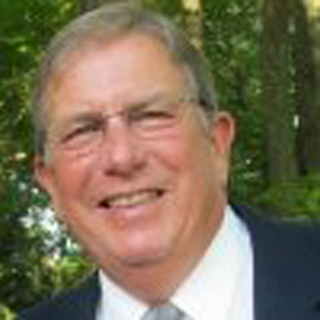