Economics of usage in Asia

Single-use disposables have become a common name in the biomanufacturing industry world over. All major companies related to equipment and filtration products are present in this domain. They are increasing their presence by introducing more products in the disposable / single-use format. Some of the well-known benefits are:

Increasing implementation of single-use technologies clearly indicates that their benefits are attractive to the users.

More than 1,000 biotech-based new drug entities are in various pre-clinical and clinical phases. A large number of such leads are being developed by startups and small sized firms with one to four lead candidates in their development pipeline. Since manufacturing plants take years to be built and costs run into hundreds of million dollars, most biotechnology companies are reluctant to make investments to support a therapeutic candidate still undergoing clinical trials. They rely on Contract Manufacturing Organisations (CMOs) for facilities and production expertise. This allows them to focus their resources on product development and establish a proof-of-concept in clinical trials. Meanwhile, CMOs executing short-term production requirements benefit from the fast turnaround and flexibility offered by the single-use products while limiting allied activities like changeover and cleaning validation.

The operating dynamics in Asia are quite different from the developed markets. This is largely due to the business model of the Asian biopharmaceutical industry which is primarily based on biogeneric products, lower labour costs and low-cost operations. In a scenario where the CMOs not catering to the local market and very few innovations taking place in biotechnology, the benefits of single-use technology using bioprocess containers as a model in Asian scenario can be reconsidered.

Asia benefits from having a well-developed steel fabrication set-up for the production of customised GMP vessels and related fabrication. A large number of EMEA and US FDA plants in India and in other parts of Asia make use of such indigenous fabricators.

A 200-500 litres mixing tank for buffer preparation costs around US$ 50,000 in India, which includes a jacketed pressure vessel with Clean-In-Place (CIP) / Sterilize-In-Place (SIP) pressure ratings, magnetic agitator, pH and temperature controls. Fabrication costs for similar units in the West are one and half to three times higher. The difference in cost is mainly due to the overall lower operating costs and low-cost skilled labour and not necessarily due to the usage of lower quality components.

On the other hand, a 200-litre bag holder with jacket and magnetic stirrer would cost around US$ 40,000 to 60,000 depending upon the configuration selected. Additional accessories like tubing sealer, tubing cutter etc. would take the cost to US$ 90,000. pH, conductivity and temperature control requirements further increase the cost.

A. Sinclair & M. Monge showed that adopting a single-use Bioprocess Containers (BPC)-based manufacturing system could result in overall capital saving of about 20-40 per cent over the traditional Stainless Steel (SS) fixed tank set-up in US or Europe. The major difference in Cost of Goods (COG) is due to the reduction in capital charges, smaller size of utility systems and decreased manpower for Quality Assurance & Quality Control for a disposable-component-based concept plant.

With products like SS tanks, CIP / SIP skids and other customised engineering products and piping available in Asia at a cost that is less than 25-50 per cent that of the US and Europe, the difference in capital investment between a plant with BPC set-up and with fixed SS tank decreases to a near equal level, if not to a lower one.

The cost of cleaning and sterilising a SS fixed tank is directly related to the cost of utility required. While the reduction in absolute quantity of utility may look very significant in terms of volume, the cost of CIP and SIP operation may actually be only a fraction of the cost of the bag itself. The cost of generating purified water / WFI is in the range of US$ 6 to 10 for 1,000 litres. For the cleaning of a 200-litre tank with a highly unoptimised CIP cycle, requiring 1,000 litres of water, one would spend less than US$ 10 of utilities in each run, while a single 200-litres bag alone costs above US$ 250. A process using five bags each day working 150 days in a year would require US$ 187,000 worth of bags alone against US$ 7,500 worth of utilities for a fixed tank.

Cleaning validation of buffer and process intermediate tanks consume additional resources over the set-up based on BPC. The cleaning of buffer tanks in itself is easier to validate since these are not expected to contact and contaminate the product and product carryover issues are minimal. Cleaning validation of intermediate holding tanks can be reduced by intelligent and judicious selection of worst case scenario and bracketing to minimise the number of runs required for validation.

On the other hand, the use of bags is most practical for contract manufacturers since it eliminates cleaning validation studies for a different product each time.

The use of single-use disposable systems brings a whole new set of validation requirements, which are at times more complex in nature than cleaning validation, largely due to the limited knowledge base and regulatory exposure. These are compatibility testing, extractables and leachables testing, mixing efficiency testing, leak testing, endotoxin, short-term and long-term stability testing and sterility validation. These are generally product-specific. Though reduceable for similar buffers, they still require product-specific testing for each product and intermediate. The analytical methods involved range from pH, conductivity to LC-MS, GC & GC-MS based analytical tools. The cost of carrying out the same also needs to be factored. Moreover, major bag manufacturers use different resins and probably different moulding procedures and chemicals. 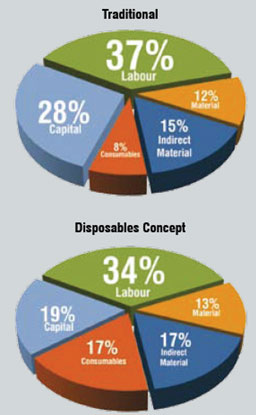 Figure 1: Contribution of individual cost head to cost of goods - US / EU

Simple substitution is not possible as in the case of stainless steel tanks, thereby increasing the reliance on a single bag manufacturer.

The Cost of Goods (COG) for any manufacturing process plays a decisive role in acceptance of the technology.

As shown in Table 1, COG comparison of a traditional steel vessel-based plant and a disposable concept plant indicates a saving of 17 per cent using disposable technology. Contribution of each major head is shown in Figure 1.

With the continuous increase in price of crude oil and that of the base plastic resin, operating cost of plants using plastics may keep on increasing, while a steel set-up once installed would not add significantly to operating expenses. 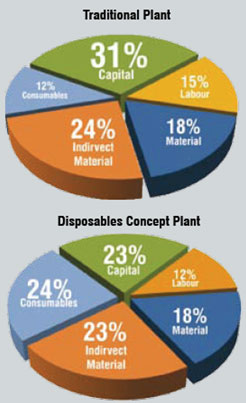 Decreasing the disposable products cost by about 30 per cent and eliminating import duties would make the scenario for adopting disposable products and technologies favourable. This cost reduction can be brought about by offering better pricing for Asian markets and by exploring the possibility of manufacturing such units in Asia itself.

Users from the US and Europe whose revenue came from contract manufacturing were the early adopters of disposable technology. Adopting the technology brought immediate reduction in capital with quick turnaround time.

However, in Asia, the focus is still on the manufacturing of biologics for captive use. Since the market for such products is highly cost-sensitive, increase in the overall cost of the finished product is critical. Since many of these plants operate mono-product lines / set-up, the need for adopting BPC set-up may not be very high.

In situations where living organisms are handled, single-use products can ensure the safety of the product as well as the operators, and thus would find early acceptance.

One of the areas where single-use disposables set-up can be of great interest is finished dose manufacturing. The existing fill-finish facility can be adapted to single-use set-up without disturbing the existing set-up, allowing manufacturers to have a greater degree of assurance as well as flexibility of scale.

In addition to the above, facilities which are limited in capacity due to utility limitations like Water For Injection / clean steam can benefit from use of the single-use bioprocess bags.

In the European and US scenario, there is possibly a clear capital investment benefit in adopting the single-use bags and tanks. The same may not hold true in most Asian countries, where steel fabrication and labour costs are low.

The decrease in efforts in carrying out cleaning validation of fixed system needs to be evaluated critically against the cost of additional validation related to compatibility of plastics with process fluids.

Potential adopters of single-use bioprocess vessels need to carry out a critical evaluation of economic benefits while selecting between fixed tank system and single-use system.

They should also perform a thorough cost-analysis on their own before singling out one option.

Scenario of a hybrid system with a fixed non-product dedicated set-up like buffer preparation, transfer and hold with single-use product contact can also be a good compromise between cost and flexibility while making full use of the advantages of single-use systems. 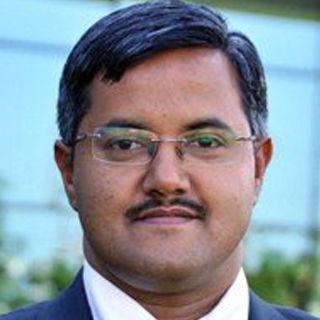 Swapnil Ballal is currently heading India's only EU-GMP approved biopharmaceutical plant at Intas Biopharmaceuticals Ltd. Being associated with the Indian biotechnology industry for the past 12 years he is presently overseeing manufacturing of 4 bio-therapeutics products along with contract manufacturing projects. He joined Intas in 2000 and played key roles in the set up of the biotechnology and R&D divisions and the manufacturing plant for biologics. Prior to Intas, he worked for Wockhardt Research Centre. He received his MSc in Marine Biotechnology from Goa University and holds professional membership at PDA and ISPE.