BIOSIMILARS IN THE PUBLIC HEALTH SECTOR

Measures to promote the use

The promotion, impulse, and sustainability of the use of biosimilar medicines in the public health sector require a variety of strategies. Incentives should be designed for prescribers and health institutions that consider the needs of the referring doctors and health professionals who are treating the patient, as well as the objectives of the health centre or institution.

The promotion, impulse, and sustainability of the use of biosimilar medicines in the public health sector require a variety of strategies. Incentives should be designed for prescribers and health institutions that consider the needs of the referring doctors and health professionals who are treating the patient, as well as the objectives of the health centre or institution.

Healthcare systems in many countries provide universal health coverage, which entails a high impact on health system budgets from therapeutic decisions. Sustainability demands that clinical judgments be balanced in part by budget restraints. In this light, biosimilars drugs are announced to contribute to the sustainability of healthcare systems so that present and future patients are properly treated, while original biologics value is unchallenged. Because the introduction of biosimilars is a cost-effective alternative, the delay in their incorporation implies a lost opportunity in terms of medicine expenses savings for the public health systems. Stakeholders also acknowledge that the advantages of biosimilars are more than budgetary, as their introduction enhances the dynamism and competitiveness of the pharmaceutical market. . However, without determined healthy competition policies, or incentives for use, the promise of biosimilars could not come about.

Therefore, health administrations actions are needed to prevent withdrawal of biosimilars from the global and local marketplace. Measures to encourage switching in patients who are clinically stable, initiate naïve patients, enable biosimilars procurement, educate key stakeholders, and many others are being adopted in many countries.

In a time of rapidly increasing of healthcare expenditure, there is an urgent need to bring on drug cost savings while maintaining care quality and clinical effectiveness. Biosimilars are consistent with this concept and comprise an important instrument for making medicines more accessible. However, to have maximal impact, it is essential that biosimilars are accepted by healthcare professionals and patients and that healthcare systems are responsive to biosimilar drugs uptake. Education on, and trust in, the regulatory framework pathway for these drugs will play an important part. A higher global alignment in the regulatory requirements and decision making at the global level would likely increase confidence in biosimilars and enable simplified development programs. A consistent approach to biosimilar approval would consider existing regional differences in regulations, as well as ensuring that the concept of ‘head-to- head’ biosimilarity at the core of guidelines from the European Medicines Agency (EMA) or the Food and Drugs Agency (FDA) and World Health Organization WHO were preserved. Moreover, global adoption of guidelines that have shown to be successful could accelerate the approval processes and advance in patient care.

Biosimilars are quality products that are fundamentally equal in pharmacological properties and administered under identical conditions for the same indications. Approval requirements for biosimilars also guarantee equal quality that is indistinguishable in structure, function, and clinical characteristics from the original. So, best value appears to be a reasonable approach to procurement design. However, value may have various implicit meanings, which in terms of healthcare should always be patient addressed.

After several years of biosimilars already in the market, a wide clinical experience with biosimilars serves as validation, revealing the rigorous guidelines for biosimilar development from drug agencies like the EMA or the FDA. Actually, the EMA regulatory framework have been acknowledged by other agencies and institutes, such as the US FDA and the WHO. Because registered biosimilars and reference biologics are counted practically equal, prescribing of biosimilars could be admissible based on the clinical experience acquired via biosimilar launches in Europe and past undertakings on generics.

Biosimilars are typically launched at discounted prices compared to reference biologics, often leading to a drop in the cost of the biologic treatments overall. This discount pricing allows to free up resources without reducing g quality of care, granting a net positive effect on healthcare sustainability. Increased patient access to biological therapies is also one of the beneficial effects of biologic treatments affordability.

Additionally, the redistributed funds may be used to improve other healthcare services, upgrade technology equipment or innovative medicines, or consider initiating a biological therapy at earlier stages of a given disease, conceivably modifying long-term treatment approaches. The analysis of patient registries with more data through greater biologic treatments access will help figure the longterm effects of biosimilars on disease progression.

The exhaustive structural and functional analysis of reference products required by manufacturers of biosimilars have enlarged the understanding of molecular and functional properties of original biologics. Also, biosimilar commercialisation eases the risk of shortages with the availability of more medicinal versions of the biologic drug, which is a major concern for pharmacists and healthcare authorities.

On the other hand, biosimilar development is also linked to pharmaceutical innovation, despite there is not research generated in new molecules. To provide a competitive advantage and a response to commercial threats posed by biosimilars, manufacturers of reference biologics may seek new molecules or improve the existing pharmaceutical products.

The innovation though the improvement on the drug administration, such as subcutaneous formulations of rituximab and trastuzumab, were likely urged by the challenge of approval of the intravenous biosimilar formulations.

The manufacturing process of a biosimilar is also a source of innovation. Compared with the reference products, more batch-to-batch consistency is provided by new production methods also involving innovative in-process control analytic techniques. This technological innovations in production may improve the production system for many other biologics.

Maintaining the clinical effectiveness of the original, manufacturers may claim for higher stability formulations, less immunogenicity products, or easier and more comfortable ways of delivery.

Moreover, biosimilar marketing has also entailed innovations in legal provisions for updating and improving the legal framework of biologics taking biosimilars into consideration. Pharmaceutical innovation is a must and is certainly fostered by biosimilars.

A key aspect of biosimilars is enhanced marketplace competition. In this situation, reference products manufacturers offer lower prices to biosimilar levels; and in the absence of economic leverage, prescription of reference biologics tend to prevail. In some occasions, market shares of reference products may even be extended through large discounts. Such actions are barriers to the penetration of biosimilars in the market and may discourage investments in other country markets. In Europe, the legislation enforces a healthy competition, prohibiting some anticompetitive practices to preserve incentives for biosimilar launch. To keep a healthy competition, many institutions advocate for pro-biosimilar policies or at least the adoption of active measures and sustainable pricing.

Given the known preferences for reference biologics and the distorted perceptions of benefits and risks linked to biosimilars, these measures are necessary. If pharmaceutical companies were to withdraw from the biosimilar market, the great opportunity for savings in the health system already mentioned would be lost.

Barriers to the adoption of biosimilars

The overall assessment of biosimilars by health professionals is positive, but in practice some barriers have been identified in their prescription practice such as lack of trust, a discouraging financing system, research collaborations with the reference manufacturer, greater logistical complexity for the hospital pharmacy, or perception of low difference in net price.

Other important issues are the uncertainty about biosimilar interchangeability and switching, since these concepts are not properly understood nor legally established.

Interchangeability is a property of the drug, which is based on proven therapeutic equivalence, and switching is the exchange between two interchangeable products during the treatment without the express consent of the prescriber, usually performed by the pharmacist.

Switching is one of the most debated issues and with greatest disagreement, where some scientific societies argue that the decision of switching a biologic drug should be indicated by the prescriber, after consent of the patient and making a clinical monitoring.

However, the use of biosimilars is generally allowed or recommended at the beginning of the drug treatment. But switching is commonly not allowed in a treatment already initiated in a patient with an optimal sustained response. Consequently, the interchangeability of the reference medicines to the biosimilars implies some legal and pharmacological aspects. The FDA requires evidence-based studies on switching from a reference drug to a biosimilar, in terms of effectiveness and safety, to consider a drug as ‘interchangeable’, an issue that is not addressed by the EMA. However, the interchangeability has been left to EU member states to regulate. The FDA, on the other hand, is entitled to consider a biosimilar as interchangeable and several USA states have approved laws that allow pharmacists to perform the switching. Despite this regulation, no biosimilar has yet been designated as ‘interchangeable’ by the FDA.

Many studies support switching to biosimilars, even promoted by some health authorities and governments. However, automatic substitution is prohibited in many countries. Clinical evidence is weaker when it comes to switch between biosimilars, but long clinical experience in experienced countries does not provide unexpected drug warnings.

There have been important changes in the recommendations of the scientific societies that have led to significantly progress with the biosimilar confidence, although most of them are still reluctant to automatic substitution.

Health policies are required to encourage biosimilar promotion and implementation, stimulate their use and build trust in prescribers, pharmacists and patients. Some policies have left the market run itself, and other times, promotion has been ‘only for naïve patients.’ On the other hand, some economic incentives could lead to unethical situations, and initiatives that are not supported or agreed by healthcare professionals may not progress.

The nocebo effect can compromise the benefit of biosimilars. In patients where drugs have been switched for a non-medical reason, treatment discontinuations may be higher than if they had continued with the same medicine. Although is not a problem related to drug efficacy, safety or immunogenicity, it could affect adherence and increase medical visits. (Figure:01) 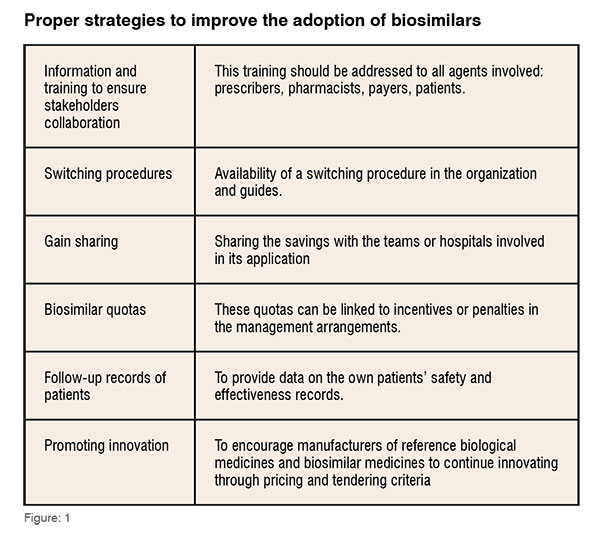 Bottom-up strategies, based on consensus between professionals, should be the preferred strategy for health authorities, as well as the consensus recommending of scientific societies and therapy guidelines for the use of biosimilars.

Procurement as a leverage for biosimilar promotion

There are different tendering practices for biologics and biosimilars across the world, with price dominating decision-making and little evidence for consideration of value-added services when awarding contracts.

Value-added services could eventually play an important element in the longterm sustainability of biosimilar markets and embed valuable solutions to patient needs in the tendering procedures.

Consideration of such value-added services could improve the long-term viability of biosimilars, as procurement would not be only based largely on cost. It has also the potential to provide benefits for patients and healthcare providers that are routinely available in order to obtain improved health outcomes.

However, there is not a standardised approach with the awarding criteria through the different tenders. Biosimilar manufacturers therefore deal with different challenges with each tender. These differences in services can also enhance a segmented market and promote competitiveness beyond price.

Tendering invites are mainly only accessible from a regional or national health-authority perspective. What’s more, information about the outcomes of procurement processes and details of successful bids are neither not readily accessible. In consequence, there is a need for increased transparency on biosimilar tendering between procurement organisations in the criteria included and applied for consideration of value-added services in tendering for biosimilars. 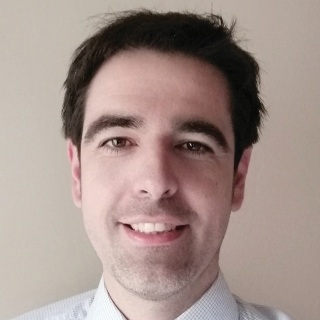 Josep M Guiu Segura is a Hospital pharmacist. He is currently Head of pharmacotherapy at the Catalan Health and Social Care Consortium in Barcelona, Spain. He is also adjunct lecturer of Clinical Pharmacy and Pharmacotherapy at the Faculty of Pharmacy and Food Sciences of the University of Barcelona. Since 2018, he is Vice-president for the European Region of the Hospital Pharmacy Section of FIP.