This article mainly focuses on the recent advances and applications of Chiral HPLC, LC-MS and SFC applications in Pharmaceutical Analysis. 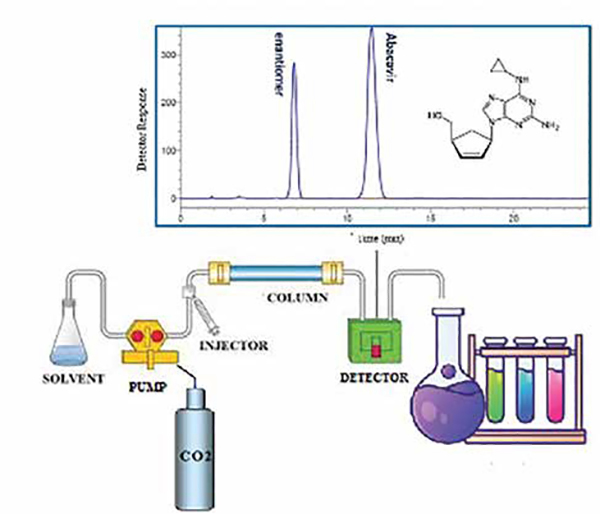 Polysaccharide derivatives are extensively used in chiral stationary phases. They provide multiple advantages including broad enantioselectivity, better resolution ability, easy availability, and high loadability under preparative separation conditions. Commercially available chiral stationary phases (CSPs) of this type are usually coated onto a silica matrix (or) covalently bonded to the silica matrix (immobilized). However, coated CSPs swell or dissolve and finally destroy the enantioselective capacity of the phase with some forbidden organic modifiers. The use of forbidden organic modifiers, such as chloroform, dichloromethane, acetone, ethyl acetate and tetrahydrofuran, in the  mobile phase is, therefore, prohibited. To overcome these limitations, new immobilised CSPs were developed, containing polysaccharide derivatives covalently bonded to the silica matrix.

At present, nine immobilised polysaccharide-based CSPs are commercially available Chiralpak IA, IB, IC, ID, IE, IF, IG, IH, IJ. The chemical structures of these selectors are given in the below figure. Different approaches were reported to fix the chiral selector chemically linking the polysaccharide derivatives to the silica matrix, which is considered to be a prerequisite for enantioselective recognition. Consequently, the enantioselective recognition abilities of polysaccharide CSPs may be different. The immobilised CSPs are robust and can be used with a broader variety of solvents, as mentioned above. This extends the application range of these selectors in terms of enantioselectivity, but also in terms of mobile-phase solubility of compounds, offering benefits at both analytical and preparative scales. 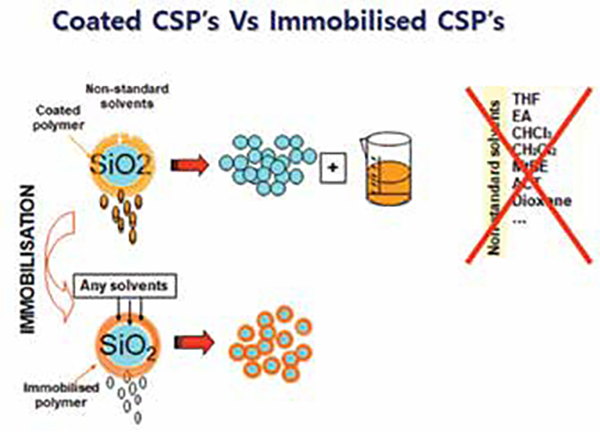 Chiral selectors present in amylose and cellulose based CSPs 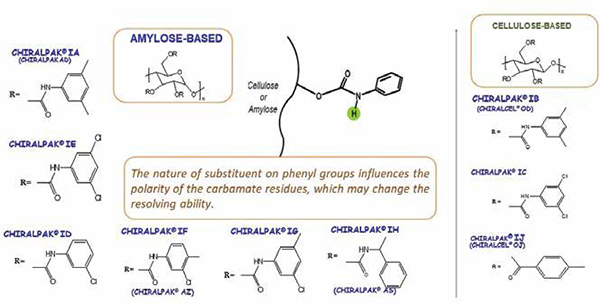 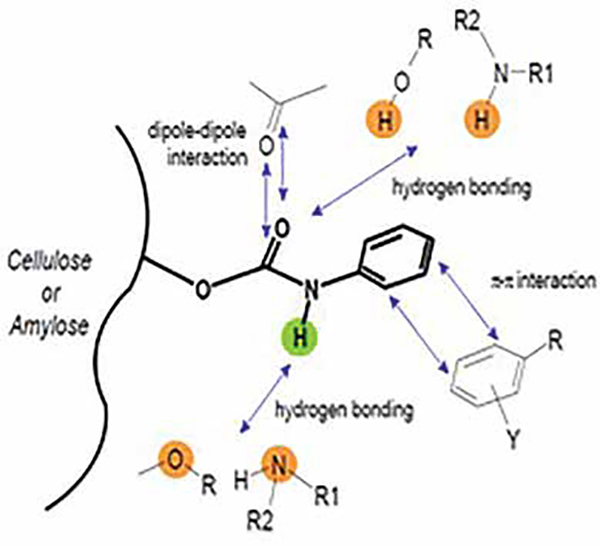 • The success rate on each immobilised stationary phase is some what different for each MP.
• Chiral HPLC is a very versatile technique for the determination of chiral impurities in bulk actives and pharmaceutical formulations.
• Using polysaccharide derived CSPs on chiral HPLC, separations can be explored in three common modes: normal phase (NP), polar organic (PO) and reversed phase (RP) chiral LC.
• For both ‘coated’ and ‘immobilised’ CSPs, in NP mode, typically alkane and alcohol mixtures are used as mobile phases.
• In case of ‘immobilised’ CSPs, additionally, solvents such as methyl tertiary butyl ether, ethyl acetate, tetrahydrofuran, dichloromethane, chloroform, 1,4-dioxane etc can be used.
• In PO mode, polar organic solvents such as methanol, ethanol, acetonitrile are used as mobile phase for both ‘coated’ and ‘immobilised’ type CSPs.
• In RP mode, water/buffer in combination with organic solvents such as acetonitrile and methanol are used as mobile phase.
• HILIC mode is suitable for separating polar compounds. Polar samples always show superior solubility in the aqueous mobile phase used in HILIC, which overcomes the disadvantages of the poor solubility often encountered in NP-LC. it can be easily coupled to mass spectrometry (ESI-MS) analysis.
• In view of difficulties in predicting the chiral separation based on the chemical structures, standard screening approach is in practice using HPLC connected with column switching valve as shown in Fig. 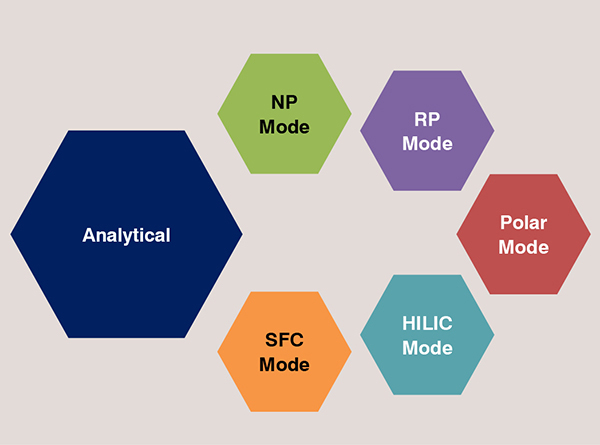 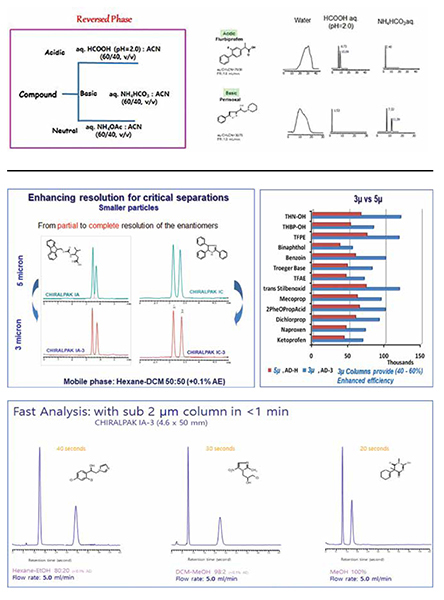 Although SFC has repeatedly proven itself as a performant separation technique for chiral separations, HPLC remains dominant in this field. This is likely due to the limited range of available SFC equipment. However, day to day, the number of reports on chiral SFC applications also increasing in pharmaceutical analysis. Chiral SFC separations can be achieved with high efficiency and minimal mobile phase solvent consumption in a short time span. SFC also has benefits in the context of upscaling to preparative scale, since returning to ambient conditions after analysis evaporates the main eluent (CO2) from the mobile phase. Due to these reasons, interest remains in SFC for enantioseparation of pharmaceutically important compounds and drug substances till now. 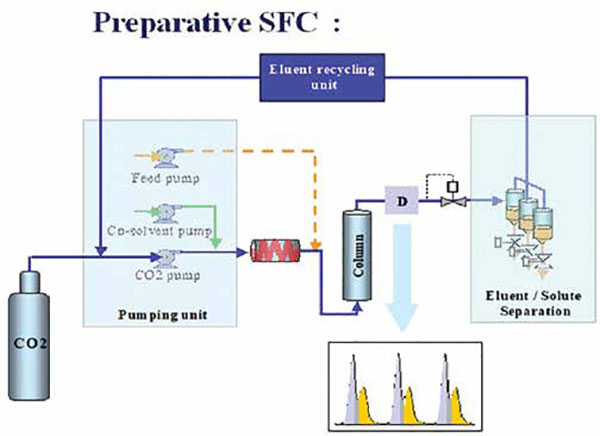 When a substance is brought above its critical temperature and pressure, coexisting both phases disappear and a new state called the supercritical fluid is formed. 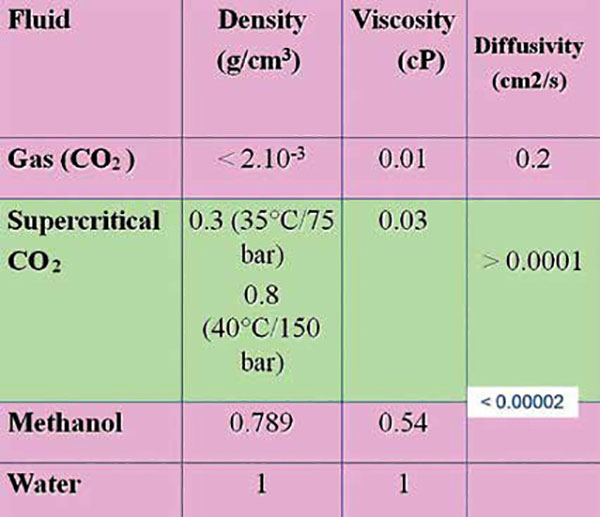 Properties of Fluids : SFC and Elution 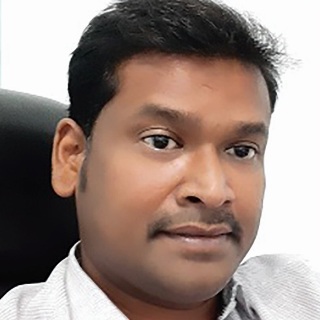