Lipid-based Drug Delivery Systems (LBDDS) are well-established pharmaceutical delivery vehicles prepared by developing a stable dispersion of lipid/oil and aqueous phase with the help of surfactants and co-solvents, to reduce the interfacial tension between the two phases and create a stable biphasic system. There are few commercialised lipid-based products including Sandimmune® and Neroal® (Cyclosporine A). LBDDS have been majorly explored to improve the solubility of poorly watersoluble drugs with many inherent benefits such as sustained release, taste masking, and better swallowability. Other physiological benefits from LBDDS include biocompatibility, higher permeability, avoiding first pass metabolism and enhanced bioavailability as they undergo digestion. In a study,Palin et al. demonstrated increased oral absorption of poorly water soluble drugs using LBDDS, as lipids provide most favourable conditions for lymphatic uptake and transport into systemic circulation.

Formulation of LBDDS was first developed by Mueller et al. as solid nanoparticles using precipitation technique by pouring hot microemulsion in cold water, following which several methods have been documented to prepare LBDDS, such as emulsification, ultrasonication, high pressure homogenisation, micro-fluidisation, etc. These techniques primarily involve melt mixing the lipid and poorly water-soluble drug to form a homogeneous lipid solution, further processed using surfactant and co-solvents to get a stable biphasic formulation. Major components of LBDDS are lipids, surfactants and co-solvents, which are screened based on drug and formulation requirements. For instance in a study by Qazi et al., the drug release was modified using a combination of lipids and a faster drug release was observed for lipids with free hydroxyl groups such as Precirol®. Surfactants are selected based on their Hydrophilic Lipophilic Balance (HLB value), characterised as water-soluble or -insoluble surfactants. Significance of surfactant’s HLB value has been well studied for modified release and for accommodating higher drug load. Finally, the co-solvents are added to the formulation for higher drug dissolution capacity and to facilitate better emulsification of the lipid inside the GI tract. Some of the common co-solvents used are propylene glycol, glycerin, etc. Based on their composition, the LBDDS are classified into four categories: Type-1 containing only oil/lipids without surfactants or co-solvents; Type-2 containing oil/lipid with water-insoluble surfactant which form stable emulsions such as Self-emulsifying Drug Delivery Systems (SEDDS); Type-3 containing lipid/oil with water-soluble surfactants with more hydrophilic components which form Self-micro-emulsifying Drug Delivery Systems (SMEDDS) with lower particle size ranging from 50-200 nm; and Type-4 containing only hydrophilic surfactants and co-solvents which form a colloidal dispersion in contact with aqueous phase.

Once the composition of the lipid phase is optimised for drug accommodation, the preparation method is selected based on required formulation characteristics such as particle size, dispersity index, homogeneity, etc. Majority of preparation techniques involve high shear mixing and breaking the lipid droplets into smaller size, thus creating a homogeneous dispersion. These techniques include high frequency sonication, high pressure homogenisation, micro-fluidisation, high pressure atomisation (spray drying), etc. All these techniques have been used over the years and multiple drawbacks have been recognised such as degradation, polymorphic changes in the drug and excipients at high melt temperature, and residual aqueous phase affecting stability of the formulation. Continuous processing techniques like high-pressure homogenisation and micro-fluidisation contain small channels which may get blocked due to lipid accumulation in the system; while batch processing techniques such as sonication and homogenisation result in lower product yield. A study by Opertiet al. demonstrated the yield value for sonication and homogenisation to be 25-50 ml per minute, which is insufficient for industrial scale-up. Further, these techniques require high maintenance cost, more time consumption and tedious scale up from pilot to industrial scale. To address these technical problems, Hot Melt Extrusion (HME) can be used as a method of choice with continuous processing capability and large-scale output.

HME is a technique in which raw material is processed under high temperature and pressure with continuous mixing and shear force to give a uniformly dispersed product. In this process, the drug undergoes thermal transition and forms an amorphous dispersion with the carrier matrix. HME is a widely used technique to prepare formulations for poorly water-soluble drugs with higher entrapment efficacy, product quality and better process control. Since past one decade, HME has been widely used to prepare LBDDS including Solid Lipid Nanoparticles (SLN), nano-emulsions, nanostructured lipid carriers, lipid implants, etc.; as it provides additional benefits such as negligible heat exposure with short barrel residence time, avoiding formulation overheating/reheating, and continuous processing capabilities which save time, lower the cost of production and avoids batch-to-batch variability.

Hot melt extrusion is carried out using an extruder which comprises three major components. First, the feeding zone through which the material enters the extruder. Feeding zone is also used to control the feed rate which can affect the hardness, and sphericity of the extruded material (Figure 1A). Feeding zone also comprises an inlet for adding aqueous solvent to the extrusion barrel. Second, the Barrel which is the main body of the extruder through which material passes from feeder to discharge unit. Based on barrel design, an extruder can be classified as singleand twin- screw extruder (Figure 1B). Barrel is a heavy closed pack unit with separate heating blocks which can be adjusted to different temperatures based on the melt, transition and degradation temperature of the material. Finally, the screw assembly which consists of three types of screws, conveying screws for pushing the material forward, mixing screws arranged at different angles 0º and 90º for mixing the material forming homogeneous mixture, and discharge screw through which the final product is extruded out (Figure 1C). Other major parameters include screw speed which is adjusted based on feed rate and retention time. The screw elements are designed based on the formulation requirements, for instance, a greater number of mixing screws resulted in faster drug release; and higher dispersion was achieved by arranging mixing and conveying elements together. 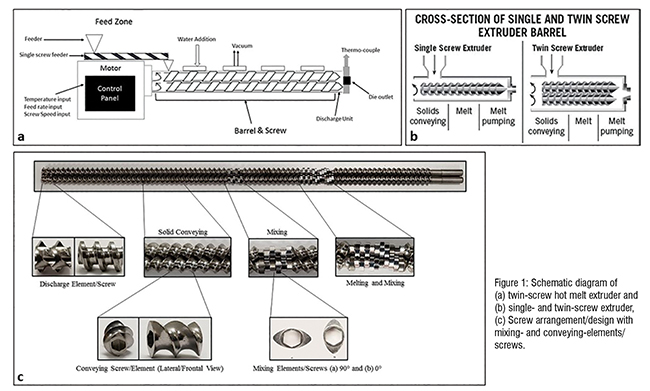 LBDDS have gained momentum over the last decade with development of highly versatile lipid excipients. For example, Compritol® 888 ATO can be used for controlled release, Precirol® ATO 5 has good coating properties, Gelucire® 50/13 can be used as a solubility enhancer, and stearic acid for pH dependent release(Table 1). Most of the lipids/oils are stable at high temperature thus making them suitable for melt extrusion for LBDDS preparation. Other advantages such as high scalability, solvent-free technique, low oxygen exposure, reduced process steps and time, give HME precedence over other melt techniques to prepare LBF. Several studies report comparative findings showing enhanced drug release for LBF prepared using HME compared to other techniques. 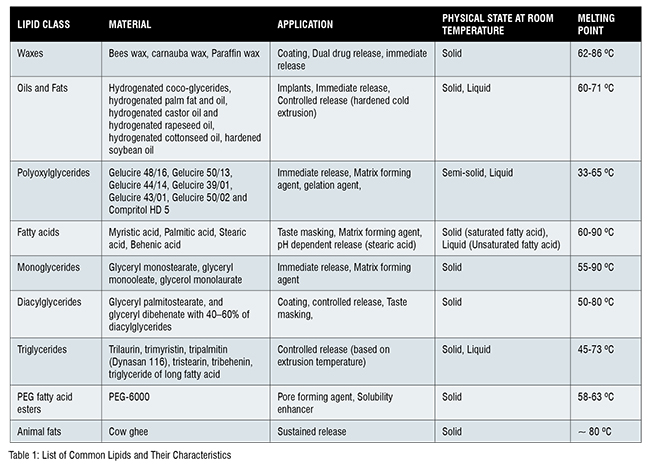 HME for LBF is performed by processing pre-mixed lipid and drug mixture through the extruder along with other excipients. This process is carried out at pre-determined temperature based on thermal properties of the material which can be studied using Differential Scanning Calorimetry (DSC) for identifying the thermal behaviour of the material. Other parameters such as retention time depends on how long the material needs to be retained inside the barrel, which further determines the screw speed and feeding rate for the material. All these parameters are optimised and fixed for the pilot batch which can be easily scaled up to large scale manufacturing following simple transitional estimates avoiding wastage and ease of operation. As a reason, HME has been extensively used to prepare LBDDS, few of the examples will be discussed below:

Solid Lipid Nanoparticles – As the name suggests these are spherical particles with an average size range of 100-1000 nanometers with an inner solid lipid core stabilised by surfactant/emulsifiers on the surface. SLN can be prepared using lipids with good coating properties such as Trimyristin, Glyceryl dibehenate, Stearic acid, Glyceryl distearate, etc. In a recent study, different parameters such as lipid/surfactant composition, screw speed, barrel temperature were studied and optimised for particle size <200 nm and >90 per cent drug entrapment.

Lipid based Granules – Lipid based granules can be prepared using thermoplastic binders such as polyethylene, hydroxypropyl cellulose, etc., which melt and form liquid bridges between the particles resulting in larger granules with size ranging from 0.2 – 4 mm. Granulation using HME has been performed with the advantages such as continuous processing, desired granule size, and modified drug release based on HLB value of the lipids as more hydrophilic lipids with higher HLB value resulted in faster water uptake and erosion.

Nanostructured Lipid Matrices – These lipid carrier systems are prepared using lipids with different fatty acids, thus forming an imperfect lipid matrix for drug accommodation. The extrusion of lipids is carried out at a processing temperature less than lipid melting point forming solid lipid matrices with drug release depending on the porosity of the solid matrix which can be adjusted by the processing temperature.

Lipid-based Vaccine Delivery Systems – Lipid based vaccine can be used to provide a sustained release for antigen which will decrease repeated dosing. Further, in case of mucosal delivery, lipids can provide mucosal immunity. Recently, lipid implants were prepared using a model antigen (OVA) for sustained antigen release. The release kinetics of the antigen was adjusted based on the lipid concentration.

Post-HME Processing of Lipid Based Carriers

The extruded lipid formulations may require further processing based on the final product requirements. These techniques include spheronisation for smooth surface and masking unpleasant taste and odor of the drug using spheroniser; probe sonication and High-pressure Homogeniser (HPH) for reducing the particle size and polydispersity index of the extruded emulsions. For instance, Bhagurkar et al. used probe sonication post HME to prepare nano-emulsion of uniform particle size ranging 12-15 nm. HPH and probe sonication both have been used as post extrusion techniques to prepare solid lipid nanoparticles with continuous manufacturing.

HME has been extensively used to process solid polymers such as hydroxy propyl methyl cellulose, polylactic acid, ethyl cellulose, polyvinylpyrrolidone, Polylactide-co-glycolide(PLGA), etc. Therefore, there is a lot of literature available for performing HME using solid polymers, but far less has been reported on extrusion of lipids. Hence, it is necessary to run pre-formulation studies for Lipids to understand their function and behavior for extrusion. LBDDS have a wide area of application ranging from modified release, taste masking, enhanced bioavailability, improved swallowability, etc.; combined with HME provides additional application-based advantages such as low product variability and high throughput. HME also facilitates other techniques such as milling, homogenisation, spheronisation, etc. which can be directly integrated with HME to set up a continuous platform for developing LBDDS. Further, process analytical technology such as infrared spectroscopy, UV/VIS, ultrasonic spectroscopy and Raman spectroscopy can be directly incorporated into the extruder offering real time process analysis which provide better control over the parameters and final product formulation. 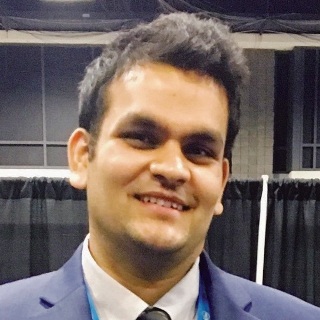 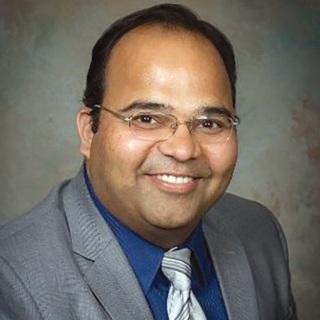