THE USE OF CRYSTAL ENGINEERING TO EFFECTIVELY TARGET LUNG INFECTIONS

Crystal engineering offers novel solutions for the delivery of antimicrobials to treat lung infections. This approach is based on removing the need for carrier particles allowing larger doses of the drug to be delivered.

Lung infections, especially lower respiratory tract infections are one of the leading causes of transmissible deaths worldwide according the world health organisation. Majority of the patients who suffer from lower respiratory tract infections are colonised in their lungs by different bacteria, such as Staphylococcus aureus, Pseudomonas aeruginosa and Haemophilus influenza. These infections tend to have a greater impact on patients who already have existing lung problems such as cystic fibrosis, chronic obstructive pulmonary disease (COPD) and bronchiectasis. These infections are also responsible for contributing to disease progression by prolonging the infection and inflammation that occurs.

Cystic fibrosis is a genetic condition that is caused by a mutation in the transmembrane conductance regulator gene. This gene is responsible for controlling the movement of salts and water between cells in the body. However, when impaired, the secretion of the salts — the chloride ion in particular — is reduced. The effect of the gene mutation dehydrates the lung airway surface resulting in hypersecretion of thick mucus and reduced mucociliary clearance. This thick mucus and the reduced clearance can then form mucus plugs within the lungs, which creates an ideal environment for certain anaerobic bacteria, e.g. Pseudomonas aeruginosa (P. aeruginosa), to safely grow. P. aeruginosa is the most common chronic lung infection that occurs in cystic fibrosis patients. This chronic infection is the main cause of mortality and morbidity in patients who suffer from cystic fibrosis.

P. aeruginosais a gram-negative bacterium that has adapted and become resistant to many antibiotics that are normally used to treat the infection. The P. aeruginosa bacteriahas developed extended-spectrum-β-lactamase strains allowing it to form biofilms that are particularly difficult to treat with the current antibiotics available (Figure 1). Biofilms are defined structures attached to the microorganism, providing an optimal environment for genetic material to be exchanged between cells and are enclosed in an extracellular polymeric substance matrix (EPS). The increased bacteria resistance to current antibiotics is driving the need to develop new and more effective antibiotic treatment to fight this infection.

Why target the lungs directly?

There are several different antimicrobial agents that can be used to treat the P. aeruginosa infection, the most common antibiotic is ciprofloxacin (CFX).It is recommended that first line treatment for the P. aeruginosa infection is oral CFX monotherapy. CFX belongs to the second generation of fluoroquinolone antibiotic group and is classed as broad spectrum. It is known for having good, strong antibacterial effects against the P. aeruginosa biofilms. At present there are only two administration methods available for this antibiotic, oral and intravenous, both of which can result in severe gastrointestinal problems and arthropathy. The two CFX delivery methods available do not deliver high concentrations of the antibiotic to the lungs as most of the drug is lost systemically, resulting in systemic side effects. Developing a CFX inhalable version for pulmonary drug delivery is an area of great interest as it isnon-invasive. The lungs have a good blood supply and a thin alveolar-capillary membrane increasing the drug absorption and, therefore, increasing the effect at the active site. Delivering a drug via the lungs also avoids first pass metabolism that occurs within the liver for the current delivery methods. The lungs have low enzymatic activity resulting in less of the drug being metabolised before having its therapeutic effect. There will also be a quicker onset of action as the drug is delivered directly to the active site. In addition, an inhalation method allows the drug to be dispensed as a powder form, which reduces the storage stability issues of CFX in its present form and improves the shelf life of the product. Inhalers are small, portable and easy for the patient to use and should improve patient adherence when it comes to taking the medication. 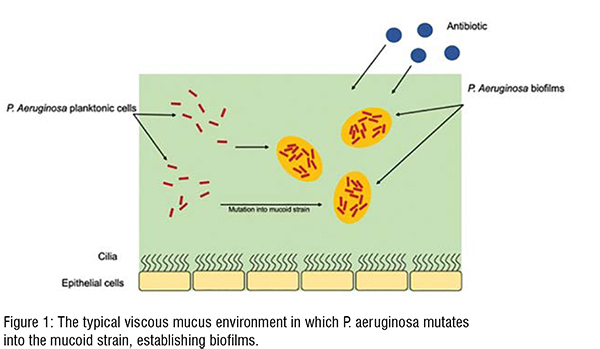 Current treatments and the need for innovative drug delivery

Current inhalation products that are on the market tend to use a carrier to deliver the active pharmaceutical ingredient to the site of action, in this case the lungs. The carrier most commonly used is lactose and the common ratio of drug to lactose content is 1:30. This would mean only small quantities of the inhaled drug are reaching the site of action in the lungs meaning larger doses have to be administered to have the same effect.

Some inhaled antibiotics, such as tobramycin, aztreonam lysine and colistin, have already be trialled and tested for treating P. aeruginosa infections. However, there are associated side-effects with these antibiotics when inhaled and they have not been very successful in eradicating the P. aeruginosa infection. Tobramycin significantly reduced the P. aeruginosabacteria count, though as a side effect it resulted in a high number of patients experiencing adverse respiratory events. CFX has also been tested as an inhalation formulation by itself in the form of nanocrystal liposomes using the spray drying technique. This technique showed that the spray dried particles demonstrated greater dispersion of the drug throughout the lungs when tested using the cascade impactor. The findings identified that the drug, CFX, could be delivered to the site of action and have a greater effect treating the infection. It is hoped that this method of delivery will result in fewer side effects as less of the drug will enter the systemic circulation. Even though inhaled CFX has shown to have reduced systemic side effects, still a large proportion of the drug is remaining in the oral cavity which needs to be addressed. Recent methods showed promising findings via spray drying technique to form the engineered microparticles that showed efficient deposition using Andersoncascade impactor. An advantage of using the spray drying technique is it produces homogeneous particles that are small, which are important factors when it comes to developing an inhaled formulation.

The inherent problem with the evolving antimicrobial resistance must also be addressed using innovative methods to engineer the drug particles. There have been different studies showing that forming co-amorphous dispersions will lead to better efficacy. This type of dispersions eliminates the need for a carrier as the drug flow properties will be improved. It also offers the benefit of combining the drug with another molecule (also known as co-former) that can possess antimicrobial properties. For example, via using physiological bile acids that are found in the intestine, where their main role is to aid the digestion of lipids, however some bile acids can also inhibit bacterial growth as well as acting as bactericidal. For example, deoxycholic acid is a secondary bile acid that has good, proven antimicrobial properties against two different strains of P. aeruginosa. A secondary bile acid is a primary acid that has undergone metabolism via bacteria flora in the colon. It is suggested that the antimicrobial properties of the bile acids are due to their hydrophobicity nature, this increases the affinity of the acids to the phospholipid bilayer that is present in the membrane of all bacteria cells, resulting in bacteria cell death. Forming co-amorphous effervescent particles is another method to enhance efficacy by which the effervescent effect will disrupt the bacterial biofilms leading to enhanced antibacterial effect. The use of crystalline equivalents to co-amorphous dispersions (i.e. as co-crystals) can also be used similarly to enhance the properties. After the rejection of Bayer’s CFX DPI formulation due to concerns over antimicrobial resistance (AMR), particle engineering to be within larger end of the required 1-5 μm particle size range, deposition of CFX can be limited to impaction in the conducting zone, avoiding potential low dose systemic delivery of CFX and therefore the potential for further AMR development.

In summary, crystal engineering represents a breakthrough in carrier-free technologies. The preparation of dispersions by established methods such as spray drying is a straightforward process, offering novel co-amorphous/ co-crystal formulations without the use of bulky carriers. These formulationscan achieve excellent in vitro deposition performance to target the conducting zone where for example P. aeruginosa biofilms are most problematic to eradicate. Most importantly, the use of appropriate co-former can enable the formulation to have a potent, synergistic effect against bacterial biofilms. It is anticipated such formulations would be used with IV or oral antibiotics in the clinic which would fully eradicate biofilms from the respiratory zone of the lower respiratory tract, with the inhaled formulations targeting the conducting zone. Similarly, as the treatment of P. aeruginosa is becoming increasingly difficult with multidrug resistant strains and biofilms becoming more widespread, antibiotic treatment options are quickly becoming limited. 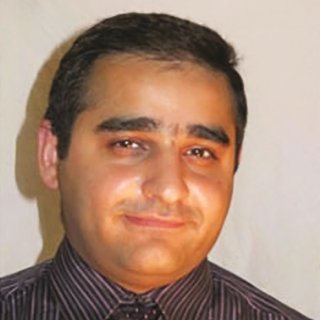 Hisham Al-Obaidi is a lecturer in pharmacy and pharmaceutical sciences and the thermal analysis lead of the chemical analysis facility at the University of Reading. His recent research focused on the use of solid dispersions to target infections affecting the lungs.