Current and Future Outlook of Pharmacogenomics in Paediatric Asthmatic Medications

Current treatment options for asthma, a respiratory condition often stemming from childhood, include beta-2 agonists, inhaled corticosteroids, and leukotriene modifiers. Despite recommendations by the Global Initiative for Asthma, a substantial number of patients are unresponsive to treatment. Paediatric pharmacogenomics could allow for potential preemptive screening, thus improving patient outcomes.

Nearly 300 million people worldwide are affected by asthma, which, left untreated or uncontrolled, decreases quality of life and increases the risk of developing chronic obstructive pulmonary disease (COPD). More than half of these asthma cases originate from childhood. Shortness of breath, tightness, and wheezing are just a few of the symptoms caused by asthma. Although robust evidence supports the efficacy of current treatment options, approximately 100 million additional asthma cases are expected by 2025. Despite recommendations by the Global Initiative for Asthma (GINA) guidelines, up to 70 per cent of patients are still unable to find proper symptom relief. While the lack of adherence and improper diagnosis have been implicated, genetics may also play a role. With widespread intra-variability among medication responses, pharmacogenomics has an emerging place in asthmatic treatment and highlights the importance of optimising a patient’s response to drug therapy while minimising adverse reactions. Although most studies have looked more closely at children, there have been no clinically relevant findings that have warranted specific therapeutic recommendations. Commonly researched medications include beta-2 agonists, inhaled corticosteroids (ICS), and leukotriene modifiers (LTM).

Classified as bronchodilators, beta-2 agonists are categorised into two groups: short-acting beta agonists (SABAs) and long-acting beta agonists (LABAs). Examples of these include albuterol and formoterol, respectively. Commonly utilised in respiratory distress, these agonists induce bronchodilation and relax smooth muscles by binding to the adrenergic receptor located in the lungs. The activation of G-protein coupled receptors (GPCR) causes an increase in cAMP concentration, decreases intracellular calcium and in turn, relieves asthma symptoms (Figure 1). 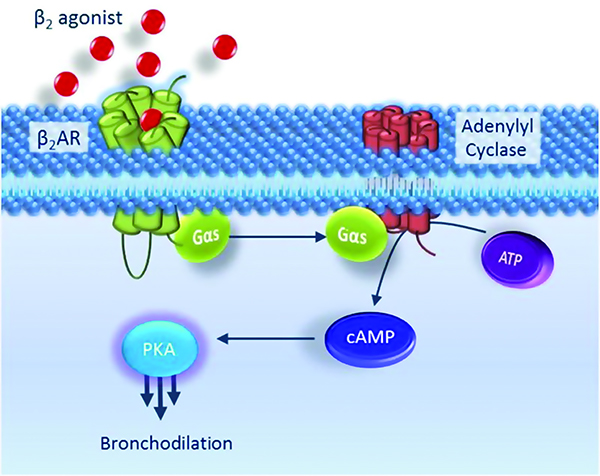 The adrenergic receptor is encoded by the ADRB2 gene and is found on chromosome 5q31-32, an area highly associated with asthma. Position 16 and 27 are two amino acid locations thought to modulate down regulation and airway responsiveness. Choudhry et al. discovered that the presence of Arg at position 16 produced the greatest bronchodilation compared to Gly16Gly when administered  albuterol in the Puerto Ricans. Although the study included both Puerto Rican and Mexican children, no genetic association was found among Mexican children. Martinez et al. reported that Arg16Arg and Arg16Gly were more likely to produce greater bronchodilation compared to Gly16Gly when given albuterol. Similar studies by Salah on Egyptian children and Finkelstein on multiethnic children also found favourable  results with Arg16Arg in response to albuterol. Both studies found reduced responses in those with Arg16Gly and Gly16Gly genotypes. In contrast, a study conducted by Carroll et al. found that children with the Gly16Gly variation showed a better response, to albuterol, compared to those with the Arg variants. Similarly, Giubergia observed changes in desensitisation over four weeks among some Argentinian children treated with albuterol and reported those with the Arg16Arg genotype displayed a decline in responsiveness to long-term treatment.

Unlike amino acid position 16, conflicting reports in response to SABA therapy at amino acidposition 27 on the receptor have limitedany significant associations. Alghoshaby measured bronchodilator response by FEV1/ forced vital capacity (FVC) and FEV1 whereas Giubergia utilized change in FEV1 over thirty days. While  the former found greater improvements with the Gln27Glu variants, the latter found a decrease in responsiveness. A study conducted by Elbahlawanon 31 African American children found that those with the Glu27Glu treated with albuterol needed additional medication for symptom control. These contradictory results provide no clear association at position 27 and bronchodilation in response to SABA.

GINA guidelines currently recommend using as needed SABA or ICS -formoterol for children who only require rescue therapy. A low dose of ICS in conjunction with a SABA is recommended as controller therapy for children ages 6-11.ICS work to improve asthma symptoms by decreasing mast cells, cytokines, COX-2, etc thereby decreasing inflammation (Figure 2). FDA indicated to reduce asthma attacks, ICS not only reduce respiratory swelling but also reduce morbidity in both children and adults. Although the risk of systemic exposure is minimal due to their route of administration, side effects such as osteoporosis, glaucoma, and metabolic disturbances are not negligible, especially when used for an extended period (Figure 2). 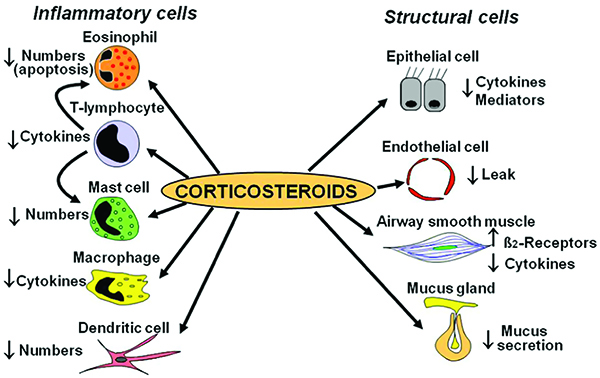 Tantisira conducted a genome-wide association study (GWAS) and identified the glucocorticoid-induced transcript 1 (GLCCI1) gene and the SNPs, rs37972 and rs37973. Although little is known about GLCCI1, those homozygote for the mutant T allele at SNP, rs37972, yielded a poorer response to ICS compared to those who were heterozygote (CT) or homozygote (CC). Conversely, Vijverberg saw no association with individuals having SNP, rs37972 and ICS response in Northern European children. It was concluded that the mutant T allele was not associated with an increased risk when treated with budesonide. In contrast, Huang found associations in the GLCCI1 gene among Chinese children with SNPs, rs37969 GG, rs37972 CC, and rs37973 AA producing favourable changes measured by maximal mid-expiratory flow. 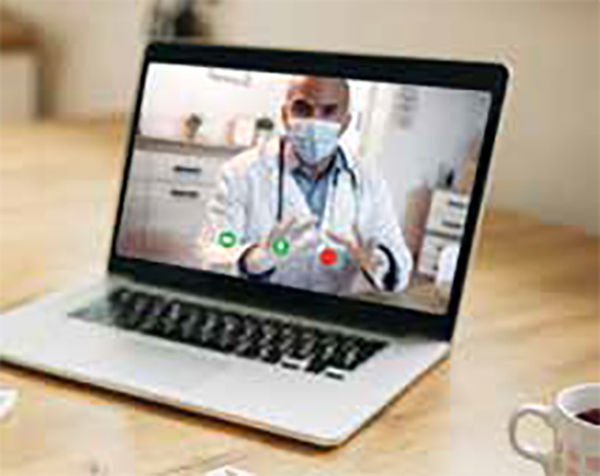 Variations among cytochrome p450 (CYP) 3A4, 3A5, and 3A7, which are involved in fluticasone metabolism, were assessed in a study conducted by Stockmann involving a group of Caucasian children. CYP3A5 and CYP3A7 were found to have no association, however, CYP3A4*22 children displayed better asthma control due to the reduced activity of this metabolic enzyme, leading to increased therapeutic outcomes. However, this was not seen in a follow-up study of 64 Caucasian children treated with beclomethasone. Observed in this study were CYP3A5 *1/*1, *1/*3, and *3/*3 variations, with the *3/*3 variant displaying the greatest responsiveness based on asthma control scores. It may be recommended that children with the CYP3A4 *22 initiate therapy with fluticasone. Children with CYP3A5 *3/*3 may be advised to avoid beclomethasoneregimens.

Leukotriene modifiers are typically considered when symptoms are uncontrolled by ICS and/or bronchodilators. As seen with previous medications, genetic differences and inter-patient variability also affect a child’s response when given LTM, such as zileuton and montelukast. Although this class may be favoured due to oral administration, nearly half of all children have reported mental status changes like depression and hallucinations. Thus, identifying variants associated with positive LTM response can benefit children who cannot gain symptom control with bronchodilators and ICS.

ALOX5 encodes for 5-lipoxygenase (5-LO) and is found on chromosome 10q11.21. 5-LO is involved in the conversion of arachidonic acid into LTA4 and is the rate limiting step in leukotriene synthesis (Figure 3).Klotsman was able to identify five ALOX5 variants associated with montelukastresponsiveness. However, only two of the five variants were found to be significant for favorable outcomes, SNP rs4987105 TT and rs4986832 AA. Conversely, Telleria recognized five copies of the transcription factor binding sequence GGGCGG (rs59439148)in the ALOX5 promoter region as the major allele. Homozygote wild types (5/5) and heterozygotes (5/4) produced favourable responses to montelukast, while the 4/4 repeats produced unfavourable responses. These children demonstrated higher rates of exacerbation and required more doses of their rescue inhaler (Figure 3). 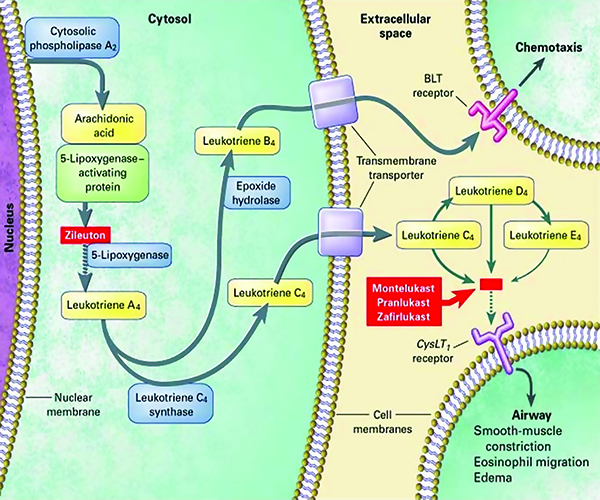 Organic anion transporter polypeptide 2B1 (OATP2B1) are drug transporters responsible for reuptake of various substrates in the liver, intestine, and kidney. Solute carrier organic anion transporter family member 2B1 (SLCO2B1) encodes for these transporters. Mougey found that those with the SNP, rs12422149 GG genotype demonstrated greater improvement at three and six months compared to the those with the AG genotype. Similarly, a study by Li with 50 asthmatic Chinese children displayed lower montelukast clearance if possessing the SLCO2B1 rs12422149 GG genotype, compared to either GA and AA. Due to increased plasma concentrations, children with the GG genotype found better symptom relief when given montelukast. Although CYP2C8 variations were also investigated in this study, no associations with montelukast response were found.

The cost effectiveness and increased quality of life due to pharmacogenomic testing in adults has been clearly demonstrated for those who are genetically inclined to show a reduced response to ICS. Although no research has been conducted in the paediatric population for the same outcomes, identifying children who may also be predisposed to ICS unresponsiveness can encourage providers to initiate LTM therapy sooner. This would eliminate the trial and error of increasing doses of a medication class that the patient will likely fail. Additionally, drug transporters and CYP450 enzymes have potential to guide clinicians when selecting medications.

Unfortunately, limitations in many of these studies include the small sample size, unstandardised outcome measures, and lack of diversity. With recent discussions on race and ethnicity, there is a need for further stratification based on genetic ancestry. Larger paediatric asthmatic studies could improve confidence for the translation of genotype to phenotype, with the common goal of developing the best course of treatment for each individual child. Although preemptive pharmacogenomic testing for asthma is not currently recommended, the hope for universal testing at an early age has the potential to eliminate prolonged medication trial and error. 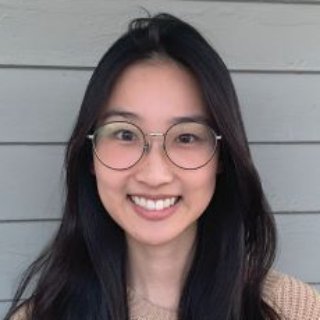 Christy Lim is a PY4 pharmacy student at the Massachusetts College of Pharmacy and Health Sciences University-Boston. Her research interests include pharmacogenomics in both adult and paediatric populations. 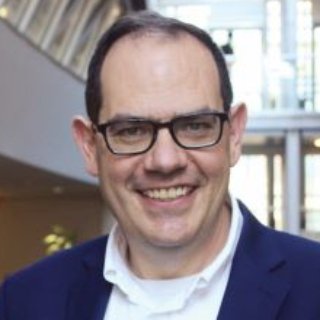 Ronny Priefer is a Full Professor of Medicinal Chemistry and Dean of Graduate Studies at the Massachusetts College of Pharmacy and Health Sciences University-Boston with over 90 peer-reviewed publications. Additionally he is a serial entrepreneur, with five start-up companies and over half a dozen patents.