Simvastatin was obtained from Researchlab fine chem. Industries India. PEG 6000 was purchased from S D fine-chem limited India. Methanol from SD finechem limited was used. All reagents were of A.R. grade. Double distilled water was used throughout the experiment.

Melting method was used for the preparation of solid dispersion. Accurately weighed carrier (PEG 6000) was melted in a water bath at 70ºC, the drug was added in the solid state and the mixture stirred until homogeneity was obtained. The mixture was then cooled rapidly in a freezing mixture of ice and stored in a desiccator for 24 hours. Subsequently, the dispersion was grinded in a mortar and sieved through 80 #. The required drug to carrier ratio for formulations was shown in table 1. 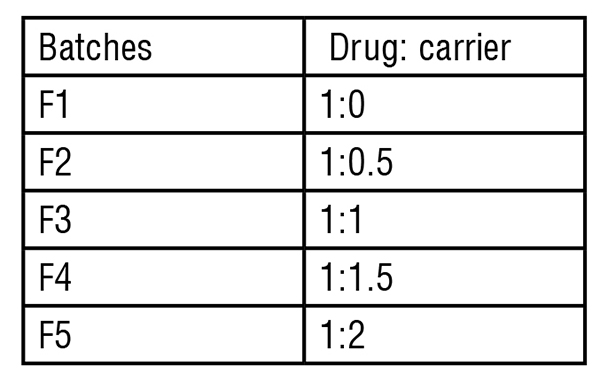 Fixed funnel method determines angle of repose. The required quantity of granules was taken in funnel where funnel tip touched the granules heap. The granules were permitted to fall through the funnel. Powder cone radius was determined and followed by determination of angle of repose using given equation.

Where ϴ is the angle of repose, h is the height of cone in cm and r is the radius of the cone base in cm.

Carr’s index is used to estimate powder flow characteristics. The Carr’s index can be calculated by the following equation 5.

Hausner’s ratio is another parameter to estimate powder flow characteristics. It is the ratio of tapped density to bulk density. It is shown in equation 6.

To evaluate the solubility of Simvastatin in the presence and absence of carriers, saturation solubility measurements were conducted. An excess amount of plain Simvastatin and dispersion powder were added to 20 ml of freshly prepared phosphate buffer pH 7 containing 0.5% Sodium lauryl Sulphate (SLS) in clean vials with continuous shaking at 25 ± 0.5ºC for 24 hours to achieve equilibrium. The filtered solutions were suitably diluted and analysed for Simvastatin at 247 nm on a UV spectrophotometer (Shimadzu, model no. 1800 , Japan). Drug content

Dissolution studies were performed in phosphate buffer pH 7 containing 900 ml at 37 ± 0.5°C, using USP type-II apparatus with paddle rotating at 75 rpm. Sample of pure drug, solid dispersions of various batches each containing 40 mg equivalent of drug were subjected to dissolution. Aliquots of 5 ml were withdrawn at time intervals of 10, 20, 30, 40, and 50 mins. were filtered and spectrophotometrically analysed at 247 nm.

Stability study was conducted on optimised formulation. The formulations were packed in an airtight container and stored in stability chamber at 40 ± 2°C and 75 ± 5% RH for a period of 3 months. The samples were then withdrawn at interval of 30, 60 and 90 days and were evaluated for drug content and In-vitro dissolution studies. 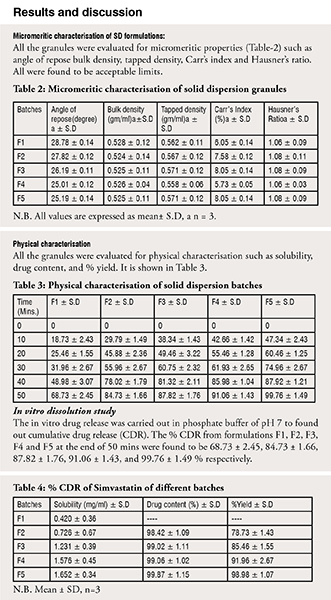 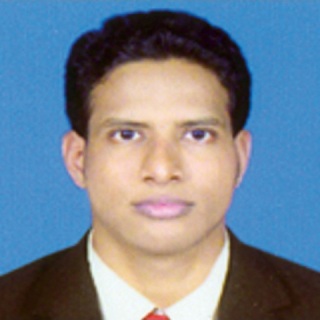 Subrat Kumar Tripathy is working as Assistant Manager in Zydus Cadila Healthcare Ltd., Kundaim, Goa. His main areas of interest is in validation of different dosage forms  like injectables and OSD. He has more than 10 years of experience in pharmaceutical field and expertise in validation, qualification etc. 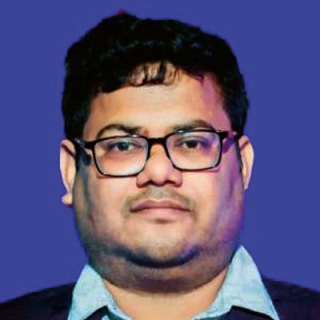 Chinmaya Keshari Sahoo is working as Associate Professor of Pharmaceutics at College of Pharmaceutical Sciences; Puri, under Biju Patnaik University of Technology (BPUT), Odisha. His main areas of interest in research includes in controlled drug delivery systems. He has published 99 articles (Google Scholar Citations 370, h-index=15 and i10-index 11) in various international and national journals as well as represented more than 21 papers in various international and national conferences. He has authored 3 books in his credit