The utility of Gene Expression Programming (GEP) for predicting the endpoint of the granulation process in planetary mixers has been demonstrated. GEP allows modelling the impeller power of the equipment as function of operation conditions and wet granule properties, providing general experimental equations of high predictability for granulators of increasing bowl capacity.

Wet Granulation (WG) process is a critical step for the production of many pharmaceutical dosage forms. During this stage, a liquid, usually water, is combined with a blend of active ingredients and excipients to form homogeneous granules, with suitable properties to further processing.

The establishment of the end point of the wet granulation process is difficult scaling up; however, it is of high relevance within the pharmaceutical industry and often involves time-consuming empirical studies.

It has been pointed out that scaling up of a granulation process is facilitated by maintaining geometric, dynamic, and kinematic similarity. On this purpose, the suppliers design the equipment of increasing size (bowl height/diameter ratio, impeller design) to achieve geometric similarity. On the other hand, the dynamic and kinematic similarity, are directly related to the control of impeller speed, which determines the forces and/or collision energy experienced by the granules and the particles velocity inside the granulator, respectively.

In a previous recent work we have demonstrated the utility of Artificial Intelligence (AI) tools for predicting the endpoint of the granulation process in high speed mixer-granulators of different scale. The use of these new technologies has proven to be more useful than the classical procedure based on dimensionless Power number/ Reynolds number relationship.

AI tools allowed modelling the machine impeller power as function of operation conditions and wet granule properties, providing a unique experimental equation of high predictability for high shear granulators of different size and similar, or even dissimilar, geometries. In this situation, it is possible to predict the end point of the process in a large granulator, calculating the power of the impeller necessary to obtain wet granules of certain characteristics using the results of experiments carried out in small granulators.

As an extension of that work, we present here successful results derived from applying the same technology, Gene Expression Programming, to experiments carried out in geometrically similar Collette planetary mixers with increasing bowl capacity between 20 and 200 liters.

The Gene Expression Programming introduced by Ferreira has been proposed as a technology capable of providing experimental equations of high predictability, that relate the variables involved in a process with the parameters that characterise the results of that process, and consequently, generating transparent models. A full explanation of this methodology and its pharmaceutical applicability can be found in Colbourn and collaborators work.

A range of planetary mixers (Machines Collette MP 20, MP 90, and MPH 200 models, Wommelgem, Belgium) of different capacities between 20 and 200 litres were used for this study. All the bowls were regular in shape with similar relative ratios for the blades/ bowls dimensions (Figure 1).

A formulation consisting of dicalcium phosphate dihydrate (64.4 per cent), mannitol BP (21.6 per cent), maize starch (12.0 per cent) and pregelatinised starch (2.3 per cent) was used. The total weight of dry powder mix was fixed at a constant proportion of the bowl volume, giving batches of 6.0, 27.0, and 60.0 kg in weight for the 20-, 90-, and 200-liter bowls, respectively. Collette planetary mixers have four speeds and the blades have rotational and translational movement. Two or three speeds were used for each machine. A constant flow rate of water was selected in order to add 18.4 per cent of water in 10 min for all the machines. 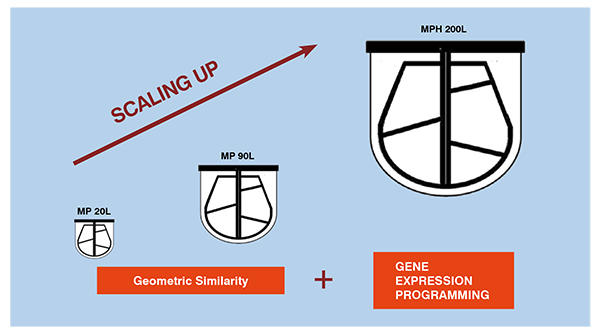 The power consumption was recorded when the machine is running at specific blade rotational speed. The raw materials were introduced in the bowl and dry mixed for 5 min and the power consumption recorded again. Water was then sprayed on at a constant rate. Wet mass samples were taken at pre-set times equivalent to different endpoints. The amount of liquid added was estimated (per cent liq). The differential power consumption for each sample was calculated (?P, Watts). The bulk density of the collected samples (?, kg m-3) was determined by weighing a glass vessel of known volume, empty and full with flush wet mass as previously described.5

The consistency of wet masses (?, Nm) was measured using a mixer torque rheometer (Caleva MTR, Sturminster Newton) as described previously. Briefly, to generate a baseline torque value, the rheometer was run empty at 52 rpm for 20s. Then 30g of wet mass sample was added and the instrument was running for 30s before initiating the data capture process (30s). Each measurement was conducted in duplicate.

For the GEP training, the database (53 records) including results from 20L, 90L and 200L was randomly split in three groups: 43 facts for training, 7 to test the error (15 per cent) and 8 as a validation dataset.

Training and test datasets were used for the GEP software to obtain a model for the output (differential power consumption,) using the impeller diameter, the gate speed, the percentage of liquid, the wet mass weight and density, and mean torque as inputs. The GEP model was obtained using the parameters in Table 2. The GEP model was expressed as an experimental mathematical function.

The quality of GEP model was tested using the determination coefficient (R2) for the training, test or validation data sets and the f-ratio of the ANOVA for the model. R2 is defined by equation 1 where y is the actual point in the data set, y’ is the value calculated by the GEP model and y” is the mean of the dependent variable. R2 value is indicative of the percentage of the variability of the differential power consumption that is explained by the selected variables. The larger the value of the Train Set R2, the more the model captured the variation in the training data. Values between 70 and 99.9 per cent are indicative of good model predict abilities. A computed f-ratio value higher than critical f value for the degrees of freedom of the model indicates not statistical significance between predicted and experimental results and hence, good accuracy of the model. 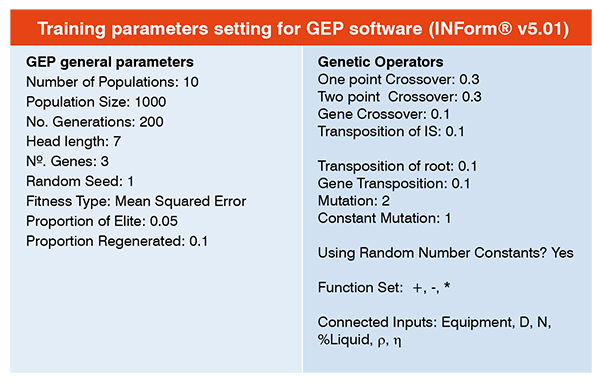 Validation of the GEP model was performed by predicting the differential power consumption results for unseen data (validation dataset) and analysing the correlation between experimental and predicted values of the validation dataset.

GEP is an evolutionary algorithm proposed by C. Ferreira that evolves complex computer programs, as neural networks from the present work, and encodes them into linear forms named chromosomes. GEP technology is able to generate populations of mathematical functions by the introduction of mutations, transpositions or recombination of the operators and to select them, according to their ability to solve a specific problem. The result is an empirical equation that expresses the relationship between the variables (inputs) and parameters (outputs), which can be used to predict outcome of the process.

INForm® succeeded in generating a predictive GEP model (empirical polynomic function, Table 3) for the differential power consumption (?P). As it can be seen, high determination coefficients were found for both training and test data (R2>85.90 per cent), which is indicative of a high predictability of the model. The ANOVA performed in order to compare experimental against predicted results also indicates good performance. The predictability and accuracy of the GEP equation point out the high quality of the model. Additionally, GEP model can properly predict, with high determination coefficient, the validation data set (R2 = 93.54 per cent), that includes previously unseen data obtained with the same equipment. 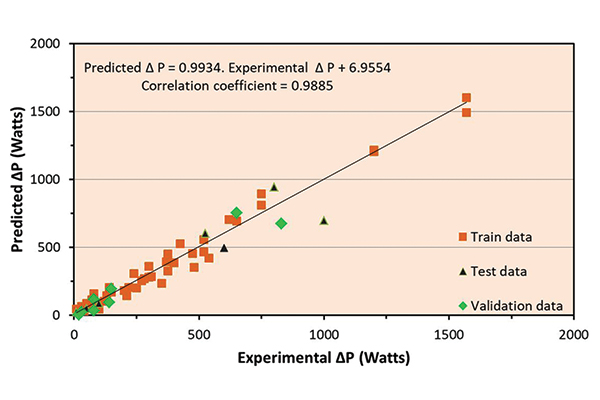 The results show that Gene Expression Programming was able to find an experimental polynomic equation (transparent model) that properly predicts the differential power consumption values as a function of the wet mass weight, the gate speed, the proportion of the granulation liquid and the properties of the wet mass (bulk density and consistency), independently of the size of the bowl.

The GEP equation allows estimating the endpoint of the granulation process in Collette planetary mixers of different size but similar geometry, through adequate predictions of the impeller power.

The principles and the methodology proposed here can be applied to understand and control manufacturing process, including continuous granulation process, using any other granulation equipment.

The good results obtained with the planetary mixers in addition to the high shear mixer-granulators presented before, are highly indicative that the AI methodology is generalisable and innovative to understand and control the end point of the wet granulation process in industrial equipment.

The experimental data of this study were obtained during the development of one of projects supported by the International Fine Particle Research Institute (IFPRI) entitled "Granulation using mechanical agitation", led by Prof. P. York from University of Bradford, which involved researchers from Zeneca Pharmaceuticals, Prof. RC Rowe and Dr. M.J. Cliff, and from Aromatic-Fielder Ltd, Mr. A.J. Wigmore. 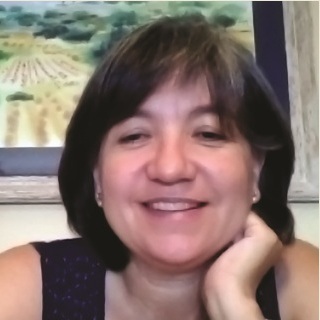 Mariana Landin is an Associate Professor in the Dpt. of Pharmaceutical Tecnology at the University of Santiago (Spain). Her research interest has been recently focused on the application of Artificial Intelligence as Neural Networks, Neurofuzzylogic, genetic algorithms or GEP for modeling pharmaceutical processes for rational design of new and/or optimised dosage forms.