High performance liquid chromatography (HPLC) has proven to be the predominant analytical technology used in laboratories worldwide during the past 30-plus years.

One of the primary drivers for the growth and continued use of HPLC has been the evolution of the packing materials used to effect the separation. An underlying principle of HPLC dictates that as column packing particle size decreases, efficiency and thus resolution also increases. As particle size decreases to less than 2.5µm, not only is there a significant gain in efficiency but also the efficiency doesn’t diminish at increased linear velocities or flow rates as dictated by the common van Deemter equation. By using smaller particles, speed and peak capacity (number of peaks resolved per unit time) can be extended to new limits, termed Ultra Performance LC™, or UPLC™. With UPLC, it is now possible to take full advantage of chromatographic principles to run separations on shorter columns, and/or higher flow rates for increased speed, with superior resolution and sensitivity.

The design and development of sub-2µm particles is a significant challenge, and researchers have been active in this area for some time to capitalize on their advantages. Although high efficiency nonporous 1.5 µm particles are commercially available, they suffer from poor loading capacity and retention due to low surface area. To maintain retention and capacity similar to HPLC, UPLC uses a novel porous particle that can withstand high pressures. Silica based particles have good mechanical strength, but can suffer from a number of disadvantages, which include a limited pH range and tailing of basic analytes. Polymeric columns can overcome pH limitations, but they have their own issues, including low efficiencies and limited capacities.

In 2000, Waters introduced XTerra™ particle technology, a first-generation hybrid chemistry that took advantage of the best of both the silica and polymeric column worlds. XTerra columns are mechanically h3, with high efficiency, and operate over an extended pH range. They are produced using a classical sol-gel synthesis that incorporates carbon in the form of methyl groups. But in order to provide the kind of enhanced mechanical stability UPLC required, a second-generation bridged ethane hybrid (BEH) technology was developed, called ACQUITY UPLC BEH technology. ACQUITY UPLC BEH 1.7µm particles derive their enhanced mechanical stability by bridging the methyl groups in the silica matrix, resulting in a column packing that can stand up to the rigors of both high pressure and high pH.

Packing a 1.7µm particle in reproducible and rugged columns was also a challenge that needed to be overcome, however. A smoother interior surface for the column hardware, and re-designing the end frits to retain the small particles and resist clogging were necessary. Packed bed uniformity is also critical, especially if shorter columns are to maintain resolution while accomplishing the goal of faster separations. All ACQUITY UPLC BEH columns also include eCord™ microchip technology that captures the manufacturing information for each column, including the quality control tests and certificates of analysis. When used in the Waters ACQUITY UPLC System, the eCord database can also be updated with real time method information, such as the number of injections, or pressure information, to maintain a complete column history.

Achieving small particle, high peak capacity separations requires a greater pressure range than that achievable by today’s HPLC instrumentation. The calculated pressure drop at the optimum flow rate for maximum efficiency across a 15cm long column packed with 1.7µm particles is about 15,000psi. Therefore a pump capable of delivering solvent smoothly and reproducibly at these pressures that can compensate for solvent compressibility, and operate in both the gradient and isocratic separation modes is required.

Sample introduction is also critical. Conventional injection valves, either automated or manual, are not designed and hardened to work at extreme pressure. To protect the column from experiencing extreme pressure fluctuations, the injection process must be relatively pulse-free. The swept volume of the device also needs to be minimal to reduce potential band spreading. A fast injection cycle time is needed to fully capitalise on the speed afforded by UPLC, which in turn requires a high sample capacity. Low volume injections with minimal carryover are also required to realise the increased sensitivity benefits.

With 1.7µm particles, half-height peak widths of less than one second are obtained, posing significant challenges for the detector. In order to accurately and reproducibly integrate an analyte peak, the detector sampling rate must be high enough to capture enough data points across the peak. In addition, the detector cell must have minimal dispersion (volume) to preserve separation efficiency. Conceptually, the sensitivity increase for UPLC detection should be 2-3 times higher than HPLC separations, depending on the detection technique. MS detection is significantly enhanced by UPLC; increased peak concentrations with reduced chromatographic dispersion at lower flow rates (no flow splitting) promotes increased source ionization efficiencies.

The ACQUITY UPLC System consists of a binary solvent manager, sample manager (including the column heater), detector, and optional sample organiser. The binary solvent manager uses two individual serial flow pumps to deliver a parallel binary gradient. There are built-in solvent select valves to choose from up to four solvents. There is a 15,000psi pressure limit (about 1000 bar) to take full advantage of the sub-2µm particles. The sample manager also incorporates several technology advancements. Low dispersion is maintained through the injection process using pressure assisted sample introduction, and a series of pressures transducers facilitate self-monitoring and diagnostics. It uses needle-in-needle sampling for improved ruggedness and a needle calibration sensor increases accuracy. Injection cycle time is 25 seconds without a wash and 60 sec with a dual wash used to further decrease carry over. A variety of microtiter plate formats (deep well, mid height, or vials) can also be accommodated in a thermostatically controlled environment. Using the optional sample organiser, the sample manager can inject from up to 22 microtiter plates. The sample manager also controls the column heater. Column temperatures up to 65°C can be attained. A “pivot out” design allows the column outlet to be placed in closer proximity to the source inlet of an MS detector to minimise sample dispersion. 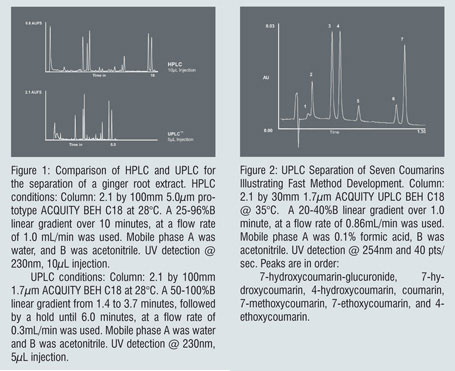 The tunable UV/Visible detector includes new electronics and firmware to support Ethernet communications at the high data rates necessary for UPLC detection. Conventional absorbance-based optical detectors are concentration sensitive detectors, and for UPLC use the flow cell volume would have to be reduced in standard UV/Visible detectors to maintain concentration and signal. Smaller volume conventional flow cells would also reduce the path length upon which the signal strength depends according to Beer’s Law. And worse: a reduction in cross-section means the light path is reduced, and transmission drops, increasing noise. Therefore, if a conventional HPLC flow cell were used, UPLC sensitivity would be compromised. The ACQUITY Tunable UV/Visible detector cell consists of a light guided flow cell equivalent to an optical fibre. Light is efficiently transferred down the flow cell in an internal reflectance mode that still maintains a 10mm flow cell path length with a volume of only 500mL. Tubing and connections in the system are efficiently routed to maintain low dispersion and to take advantage of leak detectors that interact with the software to alert the user to potential problems.

Finally, the ACQUITY UPLC System is the first instrument of its type to incorporate Intelligent Device Management technology - a type of technology that has been successfully implemented in highly regulated, maximum-security medical devices and medical records environments. Called Connections INSIGHT, this technology continuously monitors instrument operation, securely collects information about instrument conditions and then encrypts and transmits it to secure proxy servers at Waters or to pre-designated authorised service technicians within a client organisation whenever preventive maintenance is required or a system fault is encountered. In doing so, preventive maintenance procedures can be scheduled before the scientist is even aware of the need for them.

Chromatographers are used to making compromises; and one of the most common scenarios involves sacrificing resolution for speed. In addition, for complex samples like natural product extracts, added resolution can provide more information in the form of additional peaks. Figure 1 shows an HPLC versus UPLC separation comparison of a ginger root extract sample where both speed and resolution are improved. Chemometric modelling software (DryLab, Rheodyne Corp.) was used to model and redevelop the separation and transfer it to the ACQUITY UPLC System and BEH chemistry.

Faster separations can lead to higher throughput and time savings when running multiple samples. But a significant amount of time can also be consumed in developing the method in the first place. Faster, higher resolution UPLC separations can cut method development time from days, to hours, or even minutes. Figure 2 is an example of an UPLC separation of several closely related coumarins and a metabolite that was developed in under an hour; including UPLC scouting runs for gradient optimisation, and individual runs for elution order identification. These runs were performed in a fraction of the time that would be necessary by conventional HPLC, resulting in significant time savings in the method development laboratory.

At a time when many scientists have reached separation barriers pushing the limits of conventional HPLC, UPLC presents the possibility to extend and expand the utility of this widely used separation science. New ACQUITY UPLC technology in chemistry and instrumentation provides more information per unit of work as UPLC begins to fulfill the promise of increased speed, resolution and sensitivity predicted for liquid chromatography.

The author would like to acknowledge the contributions of the ACQUITY program team at Waters, particularly Michael Jones, and Andy Aubin for their contributions to this manuscript.
ACQUITY UPLC, UPLC, eCord, XTerra, and Ultra Performance LC are trademarks of Waters Corporation. 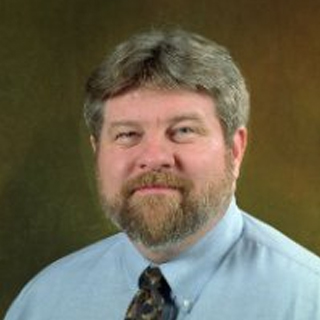