Product deformulation is a crucial but challenging process for the development of generic products. This article will discuss how deformulation uses analytical technologies to decode the physicochemical formation of a drug and provide insight into how its composition might affect drug efficacy and safety in vivo.

The reverse engineering of an RLD—product deformulation—is a critical step in the development of more accessible and less expensive generic versions. Deformulation relies on analytical technologies to not only tease apart the physicochemical properties of an innovator drug and its constituent parts—its active pharmaceutical ingredients (APIs) and excipients—but also offer drug developers insights into how the innovator RLD was manufactured. Such information is vital to drug companies competing to develop generic alternatives as drug products approach or pass patent expiration.

In this article, we will examine the use of analytical technologies in generic drug development focusing on the example of Morphologically-Directed Raman Spectroscopy (MDRS), to show how these techniques can help drug developers decode both the formulation and manufacturing processes of RLDs.

Guiding the workflows associated with generic drug development, the FDA’s Critical Path Opportunities for Generic Drugs emphasises the need for companies to adopt a Quality-by-Design (QbD) approach (1), which demands a thorough understanding and control of the variables impacting product and process behaviours. To accomplish this, developers must gather extensive information about the innovator drug, and generate data using a variety of in vitro analytical methods.

These methods help developers create a comprehensive blueprint that captures the complexity of a drug product’s constituents and how these interact, creating a microstructure which ensures the stability and effective delivery of the drug. With these critical material attributes at hand, developers can begin to design a generic product and, in some cases, may even consider reformulating the product in the hope of improving its clinical efficacy and/or safety profile.

The constituents of any drug product fall into one of two categories: excipients and APIs. Excipients can sometimes be added to a drug formulation to act simply as a bulking agent to help with achieving a consistent concentration of API in each dose. However, excipients can also be functional agents, improving the stability of the drug and altering its delivery to the patient. Examples of this include controlled-release agents, stabilisers and surface-active agents, which can alter how and how quickly an API reaches and is absorbed by its target tissues.

Developers use technologies such as laser diffraction and analytical imaging to both characterise and differentiate the excipients from other RLD components and one another, information vital to generic development and possible reformulation. When exploring reformulation, developers rely on these analytical technologies to ensure that efforts to improve one feature of a drug were not deleterious to other features.

In parallel, developers also use characterisation techniques to evaluate the active substance(s) and help them understand physical and functional features like particle shape and size distributions, chemical identity, and crystal structure. Such features provide insights into the efficacy and stability of the final drug product.

For example, the size and shape of API particles can have a significant impact on the dissolution rate of a drug, directly influencing how the API is absorbed into the blood stream in order to trigger its therapeutic effect. Similarly, developers need to understand the polymorphic form of an API, as the nature of its crystal structure can also have a significant impact on dissolution rate and bioavailability. And from a business perspective, differences in solid form can impact questions relating to intellectual property and patents.

And finally, these analytical technologies also provide developers with invaluable insights into the processes used to manufacture the innovator product. For example, API shape features such as elongation offer clues as to the manufacturing methods used to produce the final product: if analytical imaging shows small, almost spherical particles rather than long needle-shaped particles, developers can be more confident that micronization has been used during manufacture of the RLD product. Such information can be critical to the development of a generic product, as using the wrong processing technique can result in APIs with different surface area and dissolution rates to the innovator products, which can significantly impact the generic’s bioequivalence. Likewise, shape differences can influence the flow and compressibility of the generic product, for example, in tablet formulation, which may impact the quality (content uniformity) and performance.

Again, from a business perspective, a better understanding of the practices required to build a bioequivalent generic also helps companies to identify areas in which they lack technological and production capabilities and therefore might wish to seek development or manufacturing partners and collaborators.

By applying the Quality by Design approach in their generic drug development projects, scientists ensure that rigorous design principles are used consistently across the entire process, thereby ensuring the quality of the final product. Central to these principles are the use of analytical technologies that provide a foundation from which developers can engineer generic drugs that match the therapeutic characteristics of the innovator drug.

One technology that allows developers to extract both morphological and chemical data about the multiple constituents of any drug—i.e., active pharmaceutical ingredients (APIs) and excipients—is MDRS®, which combines the insights of automated analytical imaging and Raman spectroscopy.

Using the analytical imaging function of MDRS, developers can scan dispersed product samples and capture images of individual particles to understand distributions in particle shape and size. The Raman spectroscopy function then allows developers to differentiate and quantify the chemical constituents and compare the individual spectra against a reference spectral library to chemically identify them.

Experts have also used MDRS to identify the sources of counterfeit drugs by comparing their unique chemical signatures to the innovator drugs. 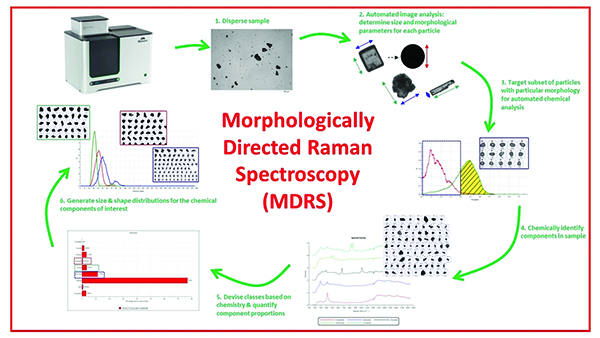 To highlight its value in deformulation studies, researchers have used MDRS to analyse commercially available treatments—a branded therapy and its generic equivalent—to identify differences in particle size distribution between the two products. The researchers noted that the generic drug contained higher total amounts of the API, whereas the branded product contained comparatively higher quantities of fine API particles. Even though the generic product contained a higher percentage of the active ingredient, the morphology of the branded product’s API particles could accelerate its dissolution in the body and therefore improve absorption.

In another experiment, researchers used the Raman spectroscopy function of MDRS to evaluate whether a sample of an API included more than one polymorphic form. Such information can be critical in RLD deformulation as it can significantly impact drug behaviour in vivo. Thus, companies will often formulate an innovator drug using the most stable polymorphic form to reduce the risks associated with polymorphic transformation during manufacture and storage (Figure 1). 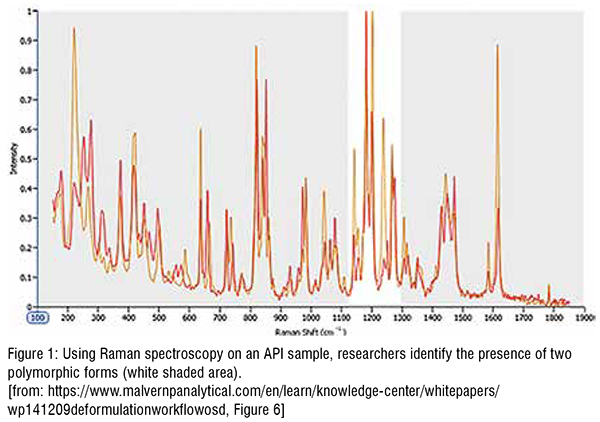 As shown in Figure 1, the researchers found that although most peaks are recorded at the same Raman shift for either polymorphic form, clear spectral differences between wave numbers 1100 and 1300 highlight the presence of two polymorphs. They can then use this information to identify API particles as one polymorph or the other and quantify the relative abundance of the two, which in this case, they determined to be1: 9 representing polymorph A and polymorph B.

Researchers have also used the analytical imaging function of MDRS to obtain morphological data about an API. As discussed earlier, such information can be very useful in determining how a product was manufactured and thereby informing the reverse-engineering process. As shown in Figure 2, the same API produced with tap milling resulted in much more elongated particles than when it was produced using micronisation (Figure 2). 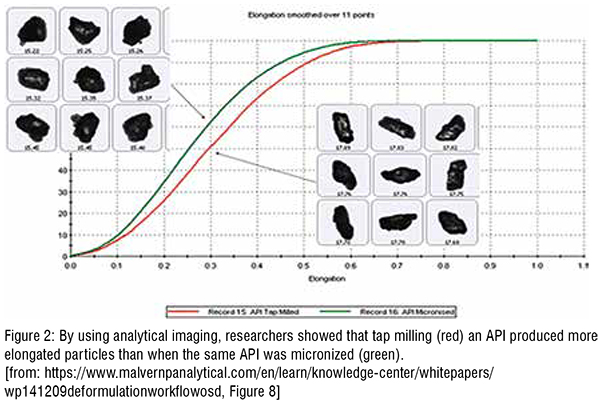 As drug product patents continue to expire and companies continue to push to develop generic versions, efforts to break down innovator products into detailed physicochemical blueprints will only increase. And the growing complexity of these therapies will continue to challenge the analytical technologies needed for generic drug development. Using newer technologies such as MDRS, drug developers are achieving a highly detailed understanding of the constituent components of drug products and probing deeper into the mechanisms by which drug composition impacts therapeutic features such as drug efficacy and safety.

Alongside these chemical insights, developers are also using these analytical technologies to find clues explaining how the innovator products were originally manufactured. This opens the door for them to replicate that production process within their own companies, facilitating access to less expensive, equivalent or possibly superior generic therapies. 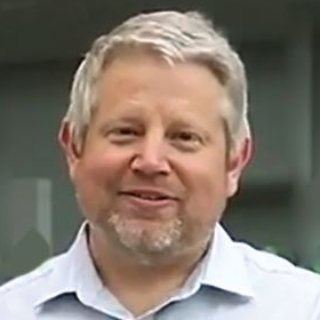 Paul Kippax leads the business development and marketing team at Malvern Panalytical as Pharmaceutical and Food Sector Director. He has a PhD in colloid science from the University of Nottingham and joined Malvern Panalytical in 1997 – developing an in-depth understanding of how material characterisation techniques can address key industry challenges.