Pharmaceutical packaging, also known as drug packaging, involves various activities ranging from pharmaceutical production to distribution to the end user. It helps in protecting the drugs and medicines from unfavorable environments such as physical damage, biological contamination and degradation. Improvement in the services of healthcare backed by rapid urbanization, especially in emerging economies have contributed to the growth of pharmaceutical packaging market. The market was valued at US$ 74.57 billion in 2016 and is expected to exhibit a CAGR of 7.76% over the forecast period 2017 to 2025.

On the basis of material, plastics and polymers segment dominated the global pharmaceutical packaging market in 2016 and is expected to retain its dominance throughout the forecast period. Furthermore, paper and paperboard segment is also gaining traction due to the rising demand for eco-friendly and biodegradable packaging material since paper is 100% recyclable, compostable, and biodegradable.

On the basis of product type, plastic bottles segment accounted for the major share in the pharmaceutical packaging market in 2016. However, environmental concerns regarding plastic pollution and adoption of alternative modes of packaging by the manufacturers is expected reduce the demand for plastic bottles in the future.

The major factors propelling the growth of this market at the global level include rising demand for ecofriendly and biodegradable packaging, and increasing demand for pre-fillable syringes since they are associated with various advantages such as reduced drug wastage, convenience, and easy drug administration. Factors hindering the growth of the market include fluctuating prices of the raw materials used for manufacturing pharmaceutical packaging products, increasing sale of counterfeit medicines and rising environmental concerns regarding plastic pollution, due to which the manufacturers are looking to adopt alternative modes of packaging. 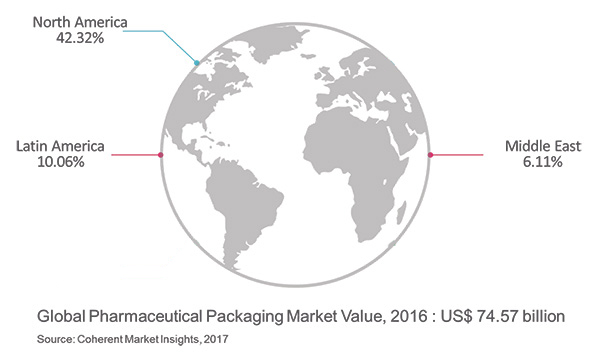