Next stage of rational vaccine design

Although vaccines helped in improving healthcare globally, significant disease challenges still remain. As such, new solutions are required where classical vaccine approaches are insufficient to provide optimal protection for specific populations and against certain diseases.

Vaccine adjuvants, compounds used to enhance a vaccine antigen’s ability to elicit a desired immune response, have been known and used for over 80 years to increase the immune response against a given antigen. With the continued emergence of new diseases and the need to find ways to address remaining disease challenges, new breakthroughs in immunology offer vaccine developers a way to design more tailored vaccine adjuvant / antigen formulations.

i. To elicit the most effective immune response (humoral and / or cellular) against a given disease;
ii. To induce long-term protection with a higher level of immune response as well as improved immune memory;
iii. To overcome weakened immunity, as seen in the case of immunosuppression or immunosenescence, a deterioration of the immune system that is associated with ageing; and
iv. To allow for immunomodulation, activation, suppression or redirection of specific immune response.

Classical adjuvants such as aluminium salts, have shown to be safe and effective in humans for decades. As a result, roughly 90 per cent of all approved human vaccines contain aluminium salts as an adjuvant. To a lesser extent, additional classical adjuvants such as emulsions, liposomes and virosomes have also been licensed for use in human vaccines. 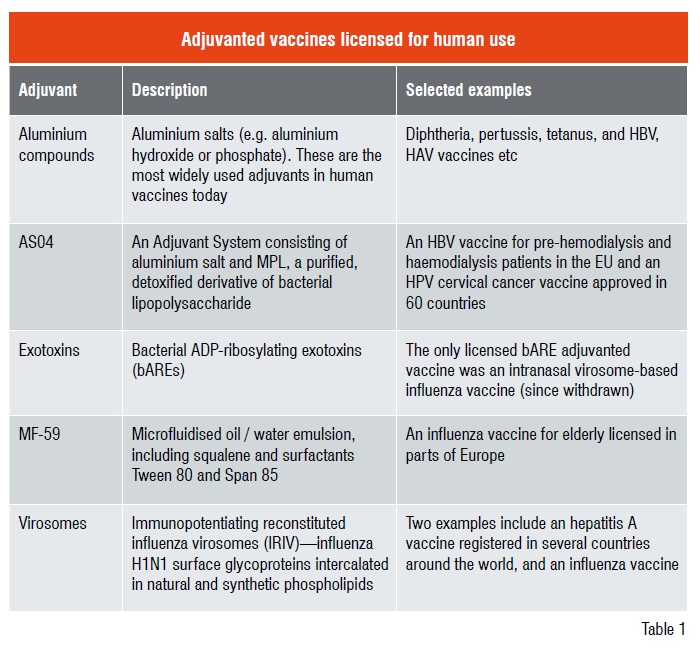 Combining adjuvants – The next step in vaccine design

Thanks to improvements in immunological and biochemical tools that have allowed a better understanding of immune mechanisms, vaccine developers can make use of a variety of classical and novel “immunomodulator” molecules to improve antigen-specific protection in a given population or against a specific disease. At present dozens of new adjuvants are being evaluated in vaccines intended for human use. A few examples of novel immunomodulators include CpG-containing oligodinucleotides (CpG), monophosphoryl lipid A (MPL), and QS-21.

While adjuvants may be incorporated into vaccines individually, combining both classical adjuvants and novel immunomodulators presents yet another option for vaccine developers looking to optimise the immune response to a given disease, or in the case of a sub-population of individuals. One such adjuvant combination is the immunostimulating complex ISCOM. Considered to be a single adjuvant but possessing multiple properties, ISCOM is made up of cholesterol, lipid, immunogen, and saponins.

An even more nuanced understanding of immunogenicity pathways, such as the interactions between innate and adaptive immune responses, allows scientists to achieve synergistic effects through certain combinations. With a growing number of novel adjuvants to choose from, one of the greatest challenges now is finding the best-suited combination to achieve an optimally effective and safe formulation in which each part of the vaccine—antigen and adjuvant(s)—works together to produce an appropriate and lasting immune response.

GlaxoSmithKline Biologicals (GSK) is a pioneer in the development of adjuvant combinations, and has devoted more than 18 years to the study of what it terms as “Adjuvant Systems”. The company currently maintains a portfolio of proprietary Adjuvant Systems. The following examples illustrate the benefit they have shown in vaccines and vaccine candidates designed with a specific pathogen or sub-population in mind.

The Adjuvant System AS04 consists of the immunomodulator MPL, a stimulant of the immune system, adsorbed on different aluminium salts. AS04 has already been evaluated in various vaccines and vaccine candidates intended to protect against viral infections / diseases including herpes simplex viruses, hepatitis B, the Epstein-Barr virus and Human Papillomaviruses (HPV).

The first AS04-formulated vaccine approved for use in humans is hepatitis B surface antigen (trade name: FENDrix™), developed specifically for patients with end stage renal diseases with a high risk of hepatitis B infection. This tailored hepatitis B vaccine, adjuvanted with AS04, allows the induction of higher specific antibody titers, enhanced cell-mediated responses, and increased seroprotection rates. Clinical data also suggest that protective antibody levels persist longer with the AS04-adjuvanted vaccine, so individuals require fewer boosters.

Now approved for use in more than 60 countries worldwide, GSK’s AS04-formulated cervical cancer vaccine Cervarix™ was designed to target the two most common cervical cancer-causing types, HPV 16 and 18. The vaccine is indicated to prevent persistent oncogenic HPV infection and cytological abnormalities that could lead to cervical cancer. The AS04-containing vaccine induces a stronger and more sustained immune response than the same virus antigens formulated with aluminium hydroxide alone. This translates into a fast and strong onset of the humoral response through antibody production that persists at a high level over time. These antibodies are not only produced at a high level but are functional as observed by their long lasting neutralisation ability.

The AS04 formulation has been evaluated over 15 years, involving over 43,000 subjects. AS04-based vaccines are generally well-tolerated, although solicited local symptoms are usually reported at somewhat higher rates than vaccines adjuvanted with aluminium salts. This, however, may reflect a stronger immunological stimulation, with higher involvement of innate and adaptive immunity than that induced by AS04 adjuvantation.

The AS02 Adjuvant System is the combination of an oil-in-water emulsion with MPL and QS-21. The latter is an immunomodulator extracted from the bark of a South American tree, Quillaria saponaria. AS02 was originally developed for use in a malaria vaccine candidate, and it has since been used in a number of other vaccine candidates, where a strong T-cell response is needed to obtain effective protection, including HIV and tuberculosis.

Development is ongoing on an AS02-formulated malaria vaccine. Malaria, a major health problem in endemic areas, is caused by multi-stage protozoan parasites of the genus Plasmodium. P. falciparum which is responsible for the most severe disease and accounts for the highest mortality rate (1 child dies every 30 seconds from malaria infection). AS02 was selected for the candidate malaria vaccine as it had shown to generate an effective antibody response and to elicit a cell-mediated immune response capable of interfering with the intra-hepatic stage of the parasite. This is the only vaccine candidate to date that has been shown to protect against P. falciparum infection, and to prevent disease in children and infants living in malaria endemic regions. A number of additional studies are being performed in various African countries to evaluate a number of vaccine parameters. A large multi-centre phase III clinical trial is planned to start in late 2008, in 8 to 10 sites across sub-Saharan Africa.

Other vaccines for specific diseases or sub-populations may require different immunostimulations in order to induce effects other than those provided by the AS02 or AS04 formulations. The AS01 Adjuvant System was developed using an alternative formulation based on the combination of liposomes, MPL and QS21.

The current AS02-adjuvanted candidate malaria vaccine has provided unprecedented protection against P. falciparum infection and malaria clinical disease. To further increase the immune response and protect a higher percentage of people, the AS01 Adjuvant System has also been evaluated in the malaria candidate vaccine. A comparative challenge study in humans has demonstrated the superiority of AS01-adjuvanted candidate malaria vaccine when compared with the AS02-adjuvanted candidate vaccine in terms of antibody titers, T cell-mediated immunity, and protection level. Based on these results, the AS01 formulation is now also being evaluated in field studies, both in adult and paediatric populations.

Pre-clinical safety evaluations of AS01 have shown a safety pattern similar to that observed with other Adjuvant Systems. To date, AS01 has been administered to a limited number of clinical trial volunteers, including young children, and the overall safety profile appears similar to the profile of AS02 containing vaccines. Further clinical evaluation will be needed to confirm the safety and tolerability profile of this Adjuvant System.

The use of adjuvants in vaccines has progressed from a primarily empirical-based approach to an increasingly rational design, as scientists become better able to measure and analyse diverse aspects of the immune system. It is now possible to combine a tailored Adjuvant System with the most appropriate antigen in order to create vaccines that may provide a more effective immune response against a specific pathogen or for a sub-population. Persistent unmet medical needs in immunisation demand increasingly sophisticated vaccine design. While challenging diseases have been discussed, one area for improvement in the case of a sub-population is vaccines for the elderly, whose immune systems are frequently less responsive than younger individuals. The emerging area of therapeutic vaccines, designed to treat rather than prevent disease, is another place where novel adjuvants and / or combinations of adjuvants may be required to elicit an antigen-specific immune response that would be capable of halting the disease process. Advancements in vaccine adjuvant science may one day help scientists and medical professionals find immunological solutions to these and many other areas of unmet medical needs. 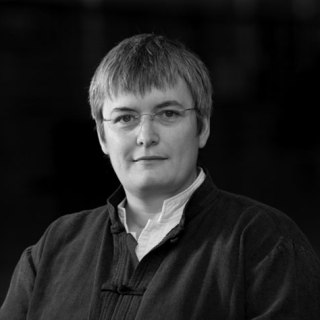 Nathalie Garçon is Vice President, Head of Research and North America R&D at GlaxoSmithKline Biologicals, and has been involved in the adjuvant work since its inception.