The fact that more than 80 per cent of pharmaceutical drugs act through proteins reflects the importance of proteins as targets for diagnosis and treatment of diseases. "-omics" disciplines were developed to discover new biomarkers for health and medicine. Among these disciplines proteomics is directly involved in drug development because disease processes and treatments often manifest at the protein level.

Studying the functions of proteins seems to be the next important phase after the Human Genome Project. The expected outcomes from the human proteomics are firstly to identify new targets, which will act as the basis for the development of new drugs, by deciphering the intracellular signalling pathways leading to the initiation and progression of pathologies and secondly, to discover new biomarkers for early diagnosis and profiling of pathologies. But technical challenges abound in proteomic research and they arise because of the large number of proteins (100,000 in human cells) present in the human body and possible modifications (acetylation, methylation, phophorylation etc.) to each of these proteins. The comprehensive analysis of protein complexes and signal transduction pathways can be achieved using new proteomic tools (Figure 1).

Almost all proteomics analytical techniques are based on protein separation. In the late 1970s, Leigh Anderson observed the potential of Two-Dimension (2D) gel electrophoresis as a mechanism to conduct proteomic studies of blood proteins and leukocytes. The first step is to separate the protein mixture of the samples. The proteins in a sample are applied to a rectangular piece of synthetic gel (mostly polyacrylamid gel). First, the proteins are separated according to their charge and their size. The proteins are then rendered visible, resulting in a pattern of spots in which each spot contains a specific protein. The bigger the spot, the more would be the number of the concerned proteins present in the sample. Next, the spot is excised and characterised by Mass Spectrometry (MS). For many scientists, the latter invention enables the analysis of fragile biomolecules at a global level. In the past few years, there has been an exponential increase in publications using the two methods (2D gels and MS) in the pharmaceutical field. Together these methods form the most powerful technology for the discovery of drug targets. Biomarkers of disease can also be discovered by these techniques. The increase of the Glial fibrillary acidic protein in Alzheimer's disease is an example of biomarkers discovered by the 2D gels and the MS. Though advancements in mass spectrometry have brought many a new drug targets to market, it is developments in chemistry, biology and bioinformatics that will lead to discovery of new drugs in the future.

With the development of analytical methods, the need for a simple separation technique is increasing. The Field-Flow Fractionation (FFF) is a flow-assisted separation technique for separating molecules in a 105 molar mass range, from macromolecules such as proteins to micron-sized particles such as whole cells. The first application of FFF to proteins was reported in 1972. This technique allows the study of protein conformation, self-dissociation and dissociation, which are strongly related to the biological activity and to the interaction of proteins with other proteins, protein receptors, cell metabolites, and last but not least, drugs. This technique finds application in fields like biotechnology, pharmacology and genetic engineering. 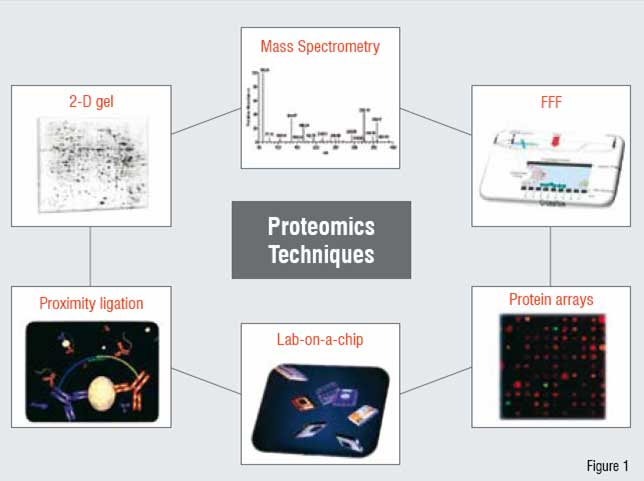 It is surprising that even after 25 years of its invention, the Polymerase Chain Reaction (PCR), which is the most commonly used technique in genomics and transcriptomics, is still the most trusted technique in proteomics. In fact, sensitive methods are needed for biomarker discovery and validation. One of these methods is the Proximity Ligation PCR Analysis, a PCR-based method. It consists of antibodies that can bind a target protein and is equipped with DNA strands capable of being joined by ligation when pairs of antibodies bind the same target protein molecule. The process can amplify and identify proteins with considerable sensitivity. Recently multiplex PLA was used to identify and to validate sets of putative disease biomarkers relevant to cancer.

Developed at Harvard University in 2000, microarray proteins are also called as protein arrays or protein chips modelled after DNA microarrays. The types of protein chips available include antibody arrays, antigen arrays and tissue arrays. This technique allows the detection and the comparison of large number of different proteins simultaneously. Antibody chips have been applied for protein profiling of intestinal, bladder, lung, pancreatic and prostate cancer; the list of applications can be very long. Hence, this tool has huge potential to alter the ways in which complex biological processes are analysed and interpreted. This would consequently open doors for personalised medicine in the clinics.

Microfluidics-based techniques like Lab-On-Chip and Capillary Electrophoresis were developed by many companies and academia. These techniques are automated, sensitive, reproducible, and give high-resolution separation proteins, differentiating almost all genotypes. They do not need toxic reagents or a long analysis time. Based on a microfluidic version of SDS Polyacrylamide Gel Electrophoresis (SDS-PAGE), Lab-on-Chip protein assay chip is intended to perform automated protein sizing and quantitation. The system samples directly using 96-well plates and integrates all manual operations including staining, de-staining, separation, detection and subsequent data analysis, essential to protein analysis. The Lab-On-Chip protein assay accomplishes these tasks in less than three hours, while the traditional SDS-PAGE consumes three to six hours for electrophoretic separation and detection. In fact, the automation of the SDS-PAGE process allows scientists to spend their valuable time on experimentation and research, rather than on processing slab gels. This method was developed and successfully used at the LaSalle Beauvais laboratory to characterise and compare proteins from different wheat cultivars. According to Prof. T Aussenac, this technique might be the backbone of the phenomics database development. It is worth mentioning that recently, researchers were showing lot of interest in phenomics, a field of study concerned with the interaction of the genome with the environment.

Technological advances of proteomics are still in their infancy as compared to genomic research. Standardised high-throughput procedures are necessary to fully leverage the potential of proteomics. Omics techniques are developing in India, the Far East and Gulf countries. In a recent paper published in Nature, a genetics scientist identified the top 10 biotechnologies for improving health in developing countries the first place being for proteomics, second and third places were for techniques related to drug and vaccines development. 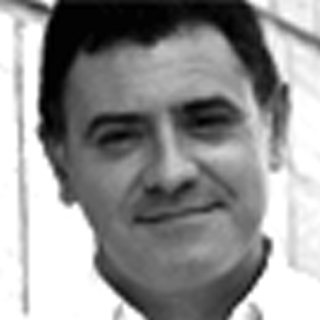 Thierry Aussenac has a PhD in plant physiology and biotechnology from National polytechnic institution in Toulouse-France. He is employed by LaSalle Beauvais as a research director, with focus on plant biochemistry especially Wheat and Linum. He is a member of the American Association of Cereal Chemist and the French association of plant biology. 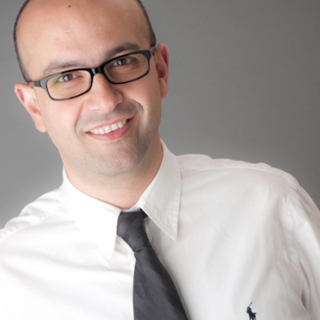