Apoferritin as a Nanocarrier

Its applications in medicine

Nanotechnology is impacting healthcare in a big way. Take ferritin, for example. It is naturally derived, and is a nano size protein which incorporates a protein cage for iron storage. Apoferritin is ferritin that is not combined with iron. Plenty of research has been conducted with apoferritin by encapsulation of therapeutic agents and imaging probes. The author will discuss several application of apoferritin as it is a promising drug delivery carrier in therapy.

In the recent years, Research & Development (R&D) in the area of nano-science and nanotechnology has increased rapidly. A nanometer (nm) is one millionth of a millimetre, and the prefix ‘nano’ comes from the ancient Greek word “dwarf.” Nanomaterials commonly range from 1–100 nm and they could be natural, incidental, or manufactured material comprising particles, either in an unbound state, or in an aggregated state. Nanotechnology has shown a huge impact in healthcare. The convergence of nanotechnology and medicine has led to the field ‘nanomedicine’. This field has brought significant advances in diagnosis, treatment and prevention of diseases. Nanomedicine combines the expertise of medicine, biology, chemistry, physics, mathematics, engineering, and computer science for the creation of devices for human application. Interestingly, a lot of the research in nanomedicine revolves in oncology, where much attention has been for targeting the disease. ‘Other than targeting there are numerous benefits of nanotherapeutics which includes improved efficacy, bioavailability, reduced toxicity, safety, enhanced solubility, greater dose response and personalisation compared with conventional medicines.’ Drug delivery is a technique which administers drugs to accomplish the therapeutic impact in humans and animals, and this process has been in the forefront of nanomedicine. A drug delivery system could be a device or a formulation that introduces a therapeutic substance into the body and improves its efficacy and safety by controlling the rate, time and place of release of drugs in the body. For the effective therapeutic delivery of pharmaceuticals, drug delivery systems comprise carrier systems. From the beginning of medical application systems, many drugs have been administered through various conventional drug delivery forms such as tablets, capsules, solutions, injectables, powders, lotions, creams, pastes, suspensions.

These conventional dosage forms are yet being employed as major drug delivery dosage products. Though these conventional drug delivery systems are effective at releasing drugs to produce a high local concentration, their scope is limited to targeting tissues rather than individual cells. Nevertheless, these may not facilitate the optimal therapeutic responses. Thus, the requirement for delivering drugs to patients effectively with limited side effects has encouraged many pharmaceutical companies to engage in developing newer drug delivery systems. To date the principle types of particles used in drug delivery systems are composed of lipids, polymers and proteins. These systems have been used to deliver therapeutics efficiently by targeting the disease site. It should be noted that biological barriers in humans and animals are a challenge to bring about the success of these drug delivery systems. The identification and understanding of the mechanisms of these barriers are important so that these devices/carriers can circumvent the environmental/biological constraints.

In the recent past, the use of proteinbased nanoparticles has grown rapidly in drug delivery. The architecture of most proteins is suitable for drug delivery as it has a hollow interior with a packed protein shell, which has a homogeneous size distribution. Current investigations have shown the potential of protein cages for delivering numerous therapeutics and imaging agents. They can also be used easily for targeting the disease site. The hollow core of the protein allows materials to be encapsulated within the enclosed shell and drug loading is commonly achieved by the assembly and disassembly of the protein cages in altered pH conditions. Then the release of the drug can be regulated by the pore size of the protein cage and the concentration difference between the interior and exterior of the protein cage. Further, the protein cages are usually stable in most physiological environments, offering protection to the encapsulated therapies. It is also an important fact that the surface area and also the interior cavities can be genetically and chemically modified without affecting the entire architecture of the protein, offering a lot of features such as precise targeting and imaging. Furthermore, protein-based nanoparticles have properties such as being biocompatible, biodegradable, and being metabolisable. Therefore, protein nanoparticles can be used in various targeted therapies such as cancer therapy, and as vaccines.

One such example of proteins as drug delivery carriers is ferritin/apoferritin. Ferritin is used to store iron, preventing accumulation of toxic levels in living organisms. When the iron atoms are removed from ferritin, apoferritin is formed. The apoferritin protein cage is composed of 24 subunits, which assemble into hollow cages consisting of an outer diameter of 12 nm and an inner diameter of 8 nm. The interior of apoferritin can accommodate up to a maximum of 4,500 iron atoms. Apoferritin has 14 channels which are formed at subunit intersections with diameters of 3–4 A° for exchanging their cargo. Eight of those channels are hydrophilic, while the remaining channels are hydrophobic, allowing transport of both hydrophilic and hydrophobic drugs, and imaging agents. As mentioned above, the disassembly and assembly of the apoferritin cage could be achieved by different pHs where encapsulation of drugs and imaging probes can be carried out. The mammalian apoferritin protein subunits are of two types, heavy and light chains of 21,000 Da and 19,000 Da respectively. The two classes of subunits share nearly identical homology. Nevertheless, the subunits are expressed in different ratios depending upon the tissue type examined. Heavy and light subunits are shown to play different roles; for instance, the heavy chain is known to catalyse iron oxidation and also facilitates accumulation of iron while, the light subunit lacks ferroxidase activity but facilitates iron nucleation. Due to this structure of apoferritin it becomes a good platform for drug delivery. Below are some of the examples of experimental data where apoferritin is being used in medicine.

A previous study has shown that the anticancer drug gefitinib (an EGFR inhibitor given mostly for non-small cell lung cancer and certain breast cancers) when encapsulated within human heavy chain apoferritin allows pH-controlled sustained release of cargo. Interestingly the results demonstrated that drug encapsulation enhanced gefitinib activity in the HER2 over-expressing breast cancer cell line SKBR3 compared to gefitinib alone. Generally, the tumour micro environments exhibit lower extracellular pH than normal tissues while the intracellular pH of cells within normal and tumour cells is similar allowing pH controlled release of cargo. Further, the authors have stated that ferritin could be internalised by some tumour tissues, due to ferritin binding sites (transferrin receptors) and endocytosis of ferritin by neoplastic cells. Ferritin receptors have shown potential value in the delivery of anticancer drugs into the brain by improving the blood–brain barrier transportation, which makes apoferritin a suitable drug delivery system. Ma-Ham et al, encapsulated the anticancer agent daunomycin (an anthracycline antibiotic drug that has been used for certain types of leukemia such as acute myeloid leukemia and acute lymphocytic leukemia) within apoferritin, to reduce toxicity of the drug. They found that the pharmaceutical properties of the antibiotic drug was not changed due to encapsulation and that it is a viable platform for the delivery of daunomycin to cancerous cells. A similar study encapsulated platinum based anticancer drugs cisplatin and carboplatin in apoferritin using two methods. Carboplatin is usually given for non-small cell lung cancer and ovarian cancer while cisplatin is given for a variety of cancers such as non-small cell lung cancer, ovarian, testicular, cervical, breast, bladder, head and neck and esophageal cancers. 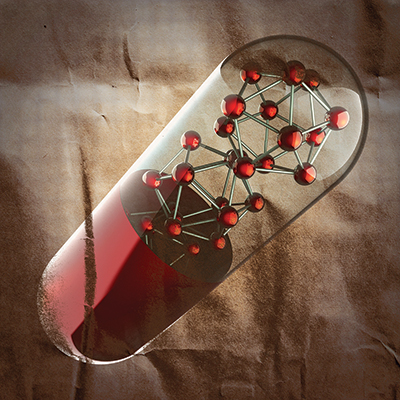 The two methods of encapsulation were the use of different pHs, and the use of an in situ procedure at pH 8.5 which resulted in a homogeneous aqueous solution. By conducting a cell viability study the authors found that the pH method was less pronounced, which might be due to the amount of drugs encapsulated by this method being much less than the in situ method. However, it should be noted that not just pH values, but also variables such as ionic concentration, protein concentration, that can increase the frequency of molecular collisions which can promote aggregation, and mechanical stress caused by processes such as mixing, filtration, dialysis can affect the encapsulation efficiency. They also found that the apoferritin protein was intact where the protein structure and charge remained unchanged even after encapsulation of the drug which is a useful property for a drug delivery system. Curtin et al, showed that apoferritin can be used to deliver therapeutic and imaging agents together. They showed that apoferritin loaded with curcumin, a polyphenolic substance endowed with antioxidant, antihyperlipidemic, antitumour and anti-inflammatory activity together with a magnetic resonance imaging contrast agent GdHPDO3A, significantly reduced thioacetamideinduced hepatic injury in mice where the drug delivery efficiency was evaluated by magnetic resonance imaging. ‘This method may help to evaluate in real-time the drug concentration in the target organ thereby providing a possibility to adapt the therapeutic protocol to patients.’ Another group of researchers have designed oxaliplatin-loaded apoferritin (oxaliplatin is a platinum-based chemotherapy drug given for colorectal cancer) conjugated with panitumumab (a human monoclonal antibody specific to the epidermal growth factor receptor, targeting metastatic colorectal cancer), to target cell lines expressing epidermal growth factor receptor. This design has released oxaliplatin and suppressed tumour cell growth efficiently together with greater accumulation of the drug in in vivo tumour models with high epidermal growth factor receptor expression. Li et al, encapsulated doxorubicin (a chemotherapy drug that belongs to the group of drugs that is called anthracyclines; and is given for bladder and breast cancers, Kaposi's sarcoma, lymphoma, and acute lymphocytic leukemia), in apoferritin and the surface of apoferritin was modified with a gold nanoshell. This system illustrated high temperature responses for the photothermal effect, and also for the release of drug molecules from apoferritin. The multi-stimuli responsive drug release system, which can achieve drug release in different conditions such as various pHs, and temperatures with high biocompatibility, may have a huge potential in biomedical applications. Overall, from the above examples it demonstrates that apoferritin is a promising nanoplatform for drug delivery especially compared with nanoplatforms made of artificial materials. Also, in current research, different types of metals or small molecules have been encapsulated into apoferritin that results in conjugates that have shown promise in drug delivery and imaging especially in the oncology field. However, more research is warranted to understand the mechanism and dynamics of apoferritin and drug complexes for better release and targeting in order to make this a promising drug delivery carrier. 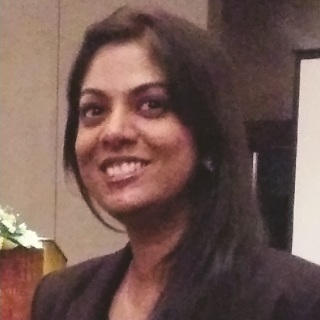 Anchala Kuruppu obtained her PhD from the University of Nottingham, UK in cancer pharmacology. Kuruppu also has a MSc from the same university in oncology and she is a double degree holder in biology and information systems. In addition Kuruppu is a charted biologist from the royal society of biology, UK. Currently she works as a research fellow at the University of Sri Jayawardenepura and University of Kelaniya, Sri Lanka.