New antibacterial drugs have been few and far between due to a slump in the R&D activities and also due to many unique challenges in this area. However, of late, there is renewed interest in this field and many innovative concepts and targets are being looked into.

The accidental discovery of Penicillin by Sir Alexander Fleming in 1928 followed by its development for use as a medicine by Australian Nobel Laureate Howard Walter Florey ushered in the era of antibiotics; the antibacterial drug discovery peaked after the middle of 20th century. However, after the introduction of streptogramin and quinolones in 1962 (Table 1), no novel class of anti-bacterial drug was discovered until the year 2000 when Linezolid (Zyvox®) was launched followed by the introduction of Daptomycin in 2003.

During the last thirty years major pharma companies downplayed this area as they considered that infectious diseases was “not a serious problem” of the developed countries and that it was the bane of the underdeveloped nations. They took their investments to other “glamorous” therapeutic areas like cardiovascular and other life-style diseases where they probed new druggable targets and came up with “blockbuster” drugs.

Thus, today there is a huge unmet medical need for new antibacterial drugs due to fast multiplication of drug resistant bacterial strains and also new, emerging pathogens. While in 1975 just 3 per cent of resistance isolates were registered, by 2003 it had grown to 59.5 per cent; especially Methicillin Resistance Streptococcus aureus (MRSA). More people have died of the bacterial infection caused by microbes than HIV disease alone.

Resistance is a complex problem and associated with multiple mechanisms in the bugs such as, existence of over 500 discrete beta-lactamases (enzymes which hydrolyse most of the ?lactam based drugs such as Penicillins and Cephalosporins); operation of efflux pumps through which the bacteria bale out the drugs even before they have a chance to act; occurrence of changes in the cell wall of the pathogens, especially in the Gram negative organisms, which have an additional outer membrane, affects the permeability of drugs. 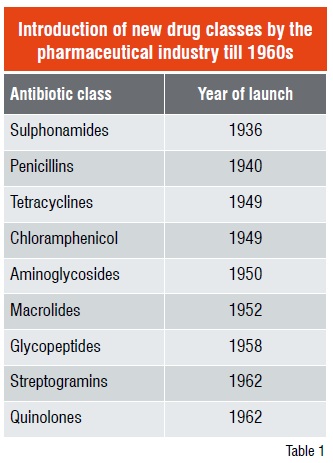 One of the reasons big pharmaceutical companies moved out of the antibacterial R&D was their disillusionment with the lack of results using high-end technologies in this area. They had embraced genomics and High-Throughput Screening (HTS) methodologies all through the 1990s.

Though these technologies yielded valuable scientific insights, they failed to produce many leads for antibacterial drugs. GlaxoSmithKline embarked on antibacterial drug discovery programme and searched the bacterial genome for new targets. Spanning seven years, they conducted 17 HTS campaigns on antibacterial new targets using several thousands of compounds. They were able to get just few hits, out of which only five leads were obtained. The reasons for this dismal result were many—some of the compounds turned out to be non-specific membrane-active agents; there was a lack of compound diversity in the compound libraries and most of them turned out to have high liphophilicity and for some others no mechanism of action could be ascertained. 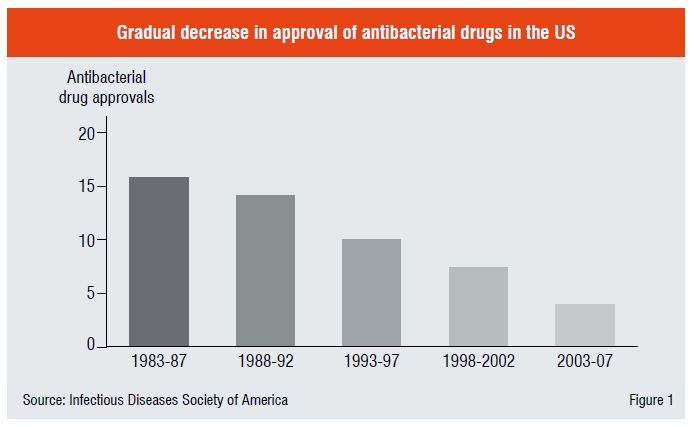 Even considering that a novel antibacterial lead was found, its optimisation phase was very challenging especially in nosocomial and community acquired infections. The compound must inhibit the growth of many different Gram-positive and Gram–negative bacterial species. A better understanding of the physicochemical parameter is one of multiple parameters that are essential to improve the future success rate for identifying clinical candidates. Not only the well-known Lipinski “rule of five” guideline failed to apply to this class of drugs, but also the physicochemical values favourable to the two strains seem to differ. Precisely, the compounds with only Gram-positive activity have much less restriction in MW and permeation through inner lipid membrane. On the other hand, Gram–negative antibacterial agents in order to function, must penetrate the porin channels and for this, high polarity plays a significant role; but not at the cost of good oral bioavailability which requires reasonable level of lipophilicity in the molecule!

Another interesting feature is that the natural products have been tapped much more effectively in the field of antibacterial drugs. This could be because microorganisms have made use of antibacterial xenobiotics extensively as their defense mechanism. We see that around 70 per cent of compounds are either natural products or semi-synthetic derivatives thereof. Only 3 out of the 20 represented classes of antibacterial drugs are synthetic in origin, those being sulfonamides, fluroquinolones and oxazolidinones. Some of the natural products have very high molecular weights and generally most of these compounds are very polar, making their oral delivery products a challenge for R&D.

The two small molecule class of compounds namely fluroquinolones and oxazolidinones (Figure 2) have been a subject of extensive Structure Activity Relationship (SAR) studies for quite some time. Fluoroquinolones target the DNA gyrase enzyme and act by blocking the DNA replication. Starting with Ciprofloxacin, many new compounds have been commercialised including Gatifloxacin and the third-generation quinolone namely, Moxifloxacin. 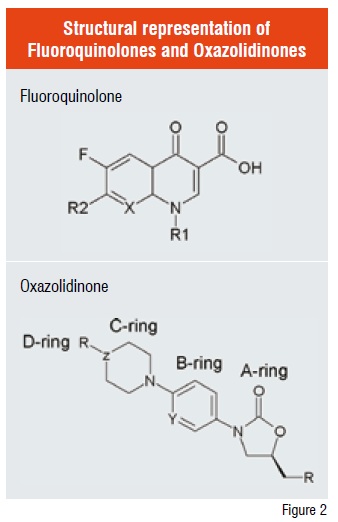 These classes of drugs have proven to be very promising broad spectral antibacterial agents covering both Gram-negative and Gram-positive bacteria. In terms of physicochemical properties, they possess higher polarity as compared to other drugs. However, this seems to be ideal for touching broad spectral activity and moreover, they exhibit high level of oral bioavailability too.

On the other hand, the oxazolidinone class exerts its antibacterial action by disrupting initiation of bacterial protein synthesis by a novel mechanism that would possibly lead to checking cross-resistance. Linezolid, which belongs to this class, was approved by FDA in 2000 for treating a wide range of Gram-positive bacteria including MRSA, Vancomycin-Resistant Enterococci (VRE) and Penicillin-Resistant Pneumococci (PRSP), but not against Gram-negative pathogens. It has filled a niche market and it is heading to becoming a blockbuster. However, the most vexing issue of this compound is that of toxicology—85 per cent of the adverse events had mild to moderate toxicity including reversible myelosuppression along with contraindication especially when used together with an anti-depressant and / or tyramine containing foods such as cheese. Soon after the success of Linezolid, many groups, both in industry and in academics have worked for nearly a decade trying to get a second-generation molecule in this class but with limited success. Extensive SAR on A to D rings (Figure 2) has been done on the oxazolidinone scaffold thus far.

As mentioned previously, smaller players have filled the gap left in the area of antibacterial R&D by the MNCs, to some extent. Among them, few have focussed on established classes of drugs and have made improvements on the existing molecules and as a result, several important anti-bacterial agents have emerged from these efforts. For instance, now we are into the fifth generation of cephalosporins (Ceftobiprole, FDA approved-about to be launched), third generation of macrolides (Telithromycin), second generation of carbapenams (Ertapenems), and third generation of tetracyclins (Tegecyclin).

Yet others have come up with very innovative methods to address the issue of poor productivity of discovery progress for new classes of antibacterials. Companies like Mpex and Protez have very successful programmmes in developing effective efflux pump inhibitors for Gram–negative and Gram-positive strains respectively. Inhibition of efflux is a promising strategy to preserve activity of the existing antibiotics and expand the spectrum of new and established classes.

Other companies like Basilea have potentiated the existing -lactam antibiotics by using them along with -Lactamase Inhibitors (BLI). Besides the existing three BLIs in market today namely, Clavulanic acid, Sulbactam and Tazobactam, hich act only on class A of lactamases, there are many ?lactam-based BLIs which are in clinical trials with extended spectrum of activity against chromosomally encoded class C lactamases that are expressed by some Enterobacteria and Pseudomonas. Indeed, it has been demonstrated that in the presence of ?lactam-based inhibitor, some pathogens up-regulate the expression of the ?lactamases. Accordingly, the need had motivated a search for novel inhibitors structurally unrelated to ?lactams, keeping in mind that, these non-?lactam based inhibitors might be able to evade pre-evolved bacterial resistance. As a result today, the first non-?lactam based BLI, NXL-104, from Novexel, a spin-off company from Sanofi-Aventis, is undergoing clinical trials.

The continuous development of antibiotic resistance has not only spurred the discovery of broad-spectral antibiotics but also search for newer targets in the coming years. In this context, researchers have been engaged using the vast knowledge about the bacterial cell-division pathway to identify novel inhibitors of the cell-division proteins that are mainly conserved in prokaryotes. Targeting unique proteins like these should reduce the likelihood of side effects in human and the very low level of bacterial resistance would probably be expected because of the novel mechanism of action governed by this new class of molecules. Accordingly, these agents would create new clinical opportunities and may be aimed at multiple segments of the antibacterial market, including hospital-acquired, community-associated and prophylactic therapies for the treatment of bacterial infections.

Uma Ramachandran has rich experience in the area of pharmaceutical sciences both in academics as well as in industry. For the last few years she has worked in new drug discovery in anti-infectives. 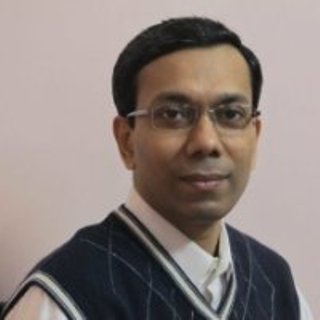 Mrinalkanti Kundu graduated from IIT. Following his postdoctoral research abroad, he has been working for last five years in NDDR, in the area of metabolic disorders, and anti-infectives.