Photodynamic Therapy (PDT), a minimal invasive cancer treatment approach, holds tremendous promise in particularly treating the local tumours. It is based on the administration of a photosensitising compound (also called photosensitiser) and subsequent irradiation with light of an appropriate wavelength to produce Reactive Oxygen Species ROS). The elevated formation of ROS can lead to the destruction of tumour tissues.

Several photosensitisers have been developed and evaluated for PDT application. Photofrin® (PF) and 5-aminolevulinic acid (5-ALA) are the most active photosensitisers in clinical application. In contrast to 5-ALA, PF has some inherent disadvantages, including prolonged skin sensitivity that requires to avoid sunlight for many weeks, sub-optimal tumour selectivity, poor light penetration into the tumour constrained by the use of relatively short light wavelength (630 nm) for irradiation, and the fact that it is a complex mixture of the uncertain structures. 5-ALA, a well-known biochemical precursor of the PhotosensitiserProtoporphyrin IX (PpIX), has several unique characteristics determining its popularity in PDT application:

1. ALA is the only PDT agent that can naturally form PpIX by the body, and alone shows low dark toxicity to cells.
2. Topical application of 5-ALA does not cause any prolonged skin photosensitivity, allowing the selective delivery of 5-ALA in the areas to be treated.
3. PpIX endogenously produced can be rapidly cleared from the body within 24 to 48 hours through a natural clearance mechanism.
4. A short time interval (1–8 hours, depending on the mode of administration) is needed between the administration of 5-ALA and the maximal accumulation of PpIX in the target tissues, which makes
5-ALA practically attractive for the patients. 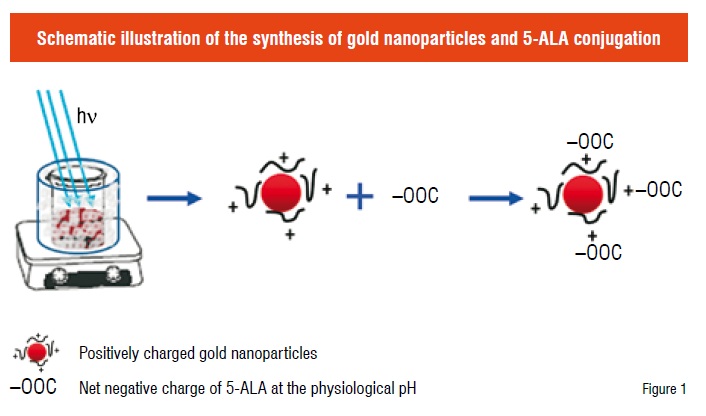 However, 5-ALA itself is hydrophilic and as a result it has poor penetration through the natural barriers such as the intact skin, the nodular skin lesions, the stomach and the intestinal walls, as well as through the cell membranes.

The limited cellular uptake of 5-ALA has motivated diverse explorations for effective delivery of 5-ALA to cells. Among various delivery carriers, nanoparticles represent a great promise with respect to their large surface to volume ratio and the cell permeable size. The application of novel biocompatible gold nanoparticles to specifically deliver 5-ALA to the tumour cells allows for an efficient PDT treatment. 5-ALA was successfully conjugated onto the Gold Nanoparticles (GNP) with a positive surface charge. The incubation of tumour cells (fibrosarcoma, a malignant cancer of connective tissues) with 5-ALA-GNP showed a significant accumulation of PpIX in the tumour cells and resulted in a substantial increase in the destruction of tumour cells after the PDT treatment. The 5-ALA-GNPs also showed a preferred uptake by fibrosarcoma cells in the presence of normal fibroblasts, which led to the selective destruction of fibrosarcoma cells with minimal damage to the normal fibroblasts.

Gold nanoparticles were synthesised using a polyelectrolyte reduction method assisted by UV radiation (Figure 1). During the preparation, 40 mL of the branched polyethyleneimine (BPEI) (0.2 mg/mL, molecular weight = 10,000) and 40 mL of 0.01 wt% HAuCl4 were first mixed under stirring. To avoid the immediate start of the reaction, the mixing step was performed in an ice bath. Then, the solution was placed under a 400 W metal halide UV lamp (Cure Zone 2) for one hour until the solution turned to dark red, indicating the completion of the reduction reaction. The gold particles formed in the solution were examined with a Scanning Electron Microscope (SEM) for their shape and with a Nano Z Zetasizer for their size and surface charge.

The conjugation of 5-ALA onto the gold nanoparticles was achieved through an electrostatic interaction between 5-ALA and the positive GNPs. 5-ALA dissolved in Dulbecco’s Modified Eagle Medium (DMEM) was sterilised by filtering through a 0.2 µm filter. Colloidal solution of GNPs was also sterilised with a 0.2 µm filter. One mL of 5-ALA solution was then mixed with 20 µL of the GNP solution. The pH of the solution mixture was adjusted to between pH 7.2 and 7.6 with 1N NaOH solution. The conjugation was characterised by UV-Vis absorption spectroscopy and SEM.

To compare the differential effect of 5-ALA-GNPs on tumour cells and normal cells, especially in the PDT treatment, Normal Human Neonatal Dermal Fibroblasts (NHDF) and human fibrosarcoma (WT) cells were used in this study. Cells seeded in 96-well plates were treated with DMEM containing GNPs, 1 mM 5-ALA or 5-ALA-GNPs. After incubation for four hours, the well plates were carefully washed with PBS in the dark and then replaced with Hank’s Balanced Salt Solutions (HBSS). For the PDT treatment, the cells were irradiated with a broadband light source using a 150W halogen lamp for one minute. After irradiation, the cells were further incubated for 24 hours. Survived cells were determined by a standard colorimetric MTT [3-(4,5-dimethylthiazol-2-yl)-2,5- diphenyltetrazolium bromide] assay.

The selective uptake of 5-ALA-GNPs by tumour cells and the selective destruction of tumour cells, especially in the presence of normal cells were studied by incubating the co-cultured WT cells and NHDF with 5-ALA-GNPs for the PDT treatment. To better distinguish the WT cells from NHDF, WT cells were first labelled with a CellTrackerTM Green CMFDA (5-chloromethyl fluoresceindiacetate) and then the same amount of NHDF and WT cell were mixed and co-cultured in a Petri dish. The co-culture was incubated with 5-ALA- GNPs for four hours, and then followed by the PDT treatment. After the PDT treatment, cells were further cultured in DMEM containing 10 per cent fetal bovine serum. After culture for 24 hours, the cells were examined under a Nikon Eclipse TE 300 fluorescence microscope and images of randomly selected area were taken to quantify the treatment efficiency by counting the green labelled cells. 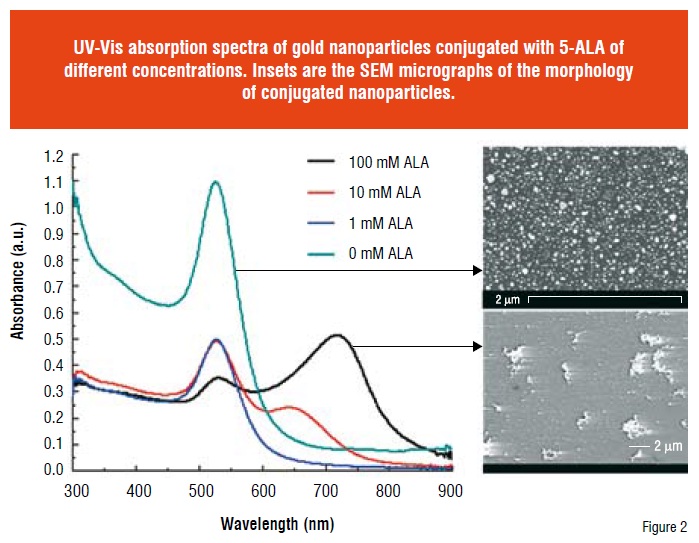 GNPs with a positive charge were synthesised following a UV assisted reduction approach (Figure 1). Majority of the obtained GNPs were sphere-like with an average diameter of 30 nm (Figure 2 inset) and had an average zeta potential () of +33 mV. BPEI is considered as the major contributor to the positive charge of GNPs. 5-ALA, a zwitterionic compound can have either an end group of COO- or NH3+, depending on the solution pH. At the physiological pH (pH 7.2 ~ 7.6), its net negative charge enables its conjugation to the positive GNPs (Figure 1). The conjugation of 5-ALA to GNPs surface was confirmed by a decreased of the GNPs. To determine the optimal conjugation ratio between 5-ALA and GNPs, various concentrations of 5-ALA were mixed with GNPs and the corresponding absorption spectrum was obtained. Compared to other concentration, the conjugation of GNPs with 1 mM ALA showed unnoticeable shift in the absorption band (Figure 2). The gold colloid itself had an absorbance wavelength at 520 nm (Figure 2). With the increase of ALA, the absorption intensity of gold colloid at ~ 520 nm decreased and a new absorption band appeared in the long wavelength region. Moreover, this new band showed a “red” shift with the increase of ALA (Figure 2), which is closely related to the particle size of the conjugates. SEM examination of the conjugates revealed that large aggregates were formed at higher ALA concentrations (Figure 2 inset), but not at 1 mM.

It is critical for the agents used in the PDT treatment to have a minimal toxicity to the cells, which is important to prevent the unwanted damage to the normal cells. The cytotoxicity of synthesised GNPs, 1 mM 5-ALA, and 5-ALA conjugated GNPs were respectively tested on NHDF and WT cells by incubating for 24 hours under dark conditions. The MTT assay result revealed that no significant cytotoxicity was measured for all of them, suggesting their biocompatibility. In the PDT study, the treatment of WT cells with 5-ALA-GNPs and 1-minute irradiation resulted in a very low cell survival rate, only 28.7± 0.8 per cent of the non-treated control. In contrast, WT cells treated with 5-ALA and irradiation yielded a cell survival rate of 59±10 per cent, as high as two times of the 5-ALA-GNP group. A more interesting result was obtained in the PDT treatment of NHDF. A survival rate of 54±8 per cent (relative to the non-treated control) was obtained in the NHDF cells treated with 5-ALA and irradiation, and this survival rate remained similar in those treated with 5-ALA-GNPs and irradiation (50±7 per cent). Necessary to mention, both NHDF and WT cells treated with only GNPs and light irradiation did not show cell destruction, with an identical number of viable cells as the non-treated control. These findings suggest that the discerning effect of the 5-ALA-GNP on NHDF and WT cells can result from a differential uptake of 5-ALA-GNPs by the cells of different type. To confirm this, a study on the uptake of 5-ALA-GNPs by NHDF and WT cells was performed. The result showed that the accumulation of 5-ALA-GNPs in WT cells was about two-fold higher than that in NHDF. 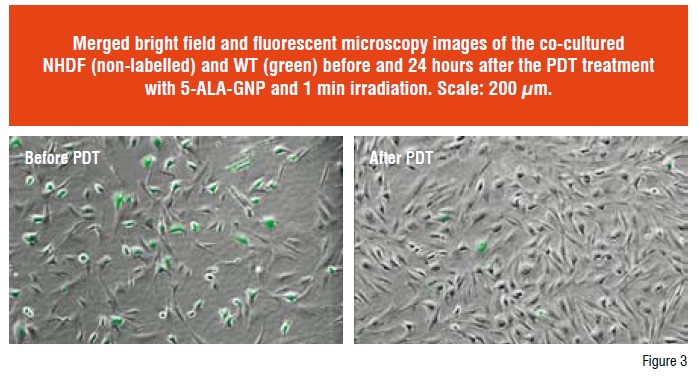 The uptake of 5-ALA-GNPs by cells occurs in two steps: binding to the cell membrane and then internalisation. The binding of 5-ALA-GNP to the cell membrane is the most critical step and it is mainly mediated by the potentials of both cell membrane and GNPs surface. The positive of the GNPs prepared in this study would favour their binding to the negative cell membrane. In general, the membrane potential of tumour cells is more negative than the normal cells, which can facilitate the binding of 5-ALA-GNP and lead to a significant uptake. Therefore, the use of GNPs can significantly improve the delivery of 5-ALA into WT cells. Although 5-ALA itself is not a photosensitiser, it can induce the intracellular formation of PpIX, a very efficient photosensitiser. It was observed that the WT cells incubated with 5-ALA-GNP showed a high amount of PpIX, about five times higher than that in the NHDF.

More importantly, a selective destruction of tumour cells by 5-ALA-GNPs was observed in the co-culture experiment with the normal fibroblasts (Figure 3). Based on this observation, we hypothesised that minimal damage to the healthy cells (i.e. NHDF) and maximal destruction of tumour cells (i.e. WT) can be achieved by using 5-ALA-GNPs. The selective destruction of WT cells is a synergy among the preferred uptake of 5-ALA-GNPs, enhanced PpIX formation in WT, and the subsequent elevation of ROS formation by GNPs. This selectivity has an important implication in clinical application to minimise the undesirable cytotoxicity to the surrounding healthy cells.

In this study, 5-ALA was successfully conjugated onto the positively charged GNPs through electrostatic interaction. The use of positive gold nanoparticles to deliver 5-ALA not only enhanced the uptake of 5-ALA by tumour cells, but also improved the delivery specificity. As a result, an effective and specific destruction of tumour cells but with a minimal damage to the healthy cells was achieved in the PDT treatment of co-cultured fibrosarcoma cells and normal fibroblasts. The current approach holds an important potential in the cancer treatment using PDT. The intrinsic activity of gold nanoparticles in Surface Enhanced Raman Scattering (SERS) will also allow a concurrent Raman imaging of the intracellular activities during the PDT treatment. 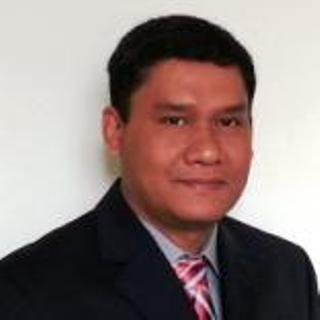 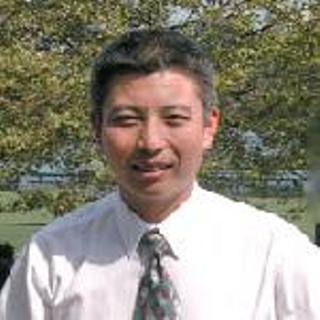 Hongjun Wang is an Assistant Professor in Biomedical Engineering at Stevens Institute of Technology. His research interests include tissue engineering, nanomedicine and cell-material interaction. He did his postdoctoral training at the Wellman Center for Photomedicine, Massachusetts General Hospital and Harvard Medical School. 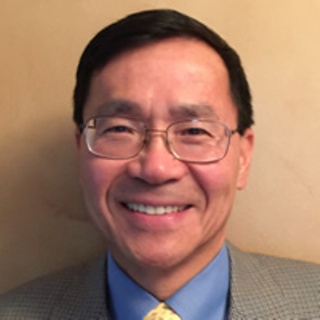 Henry Du is a Professor and Director of Chemical Engineering and Materials Science at Stevens Institute of Technology, USA. His primary research interests are surface chemical processes and surface modification, processing and measurements of electronic and photonic materials for integrated devices, surface-enhanced Raman spectroscopy for chemical and biological sensing and biomedical imaging.