When medical need is not matched by market opportunity

Tropical parasitic diseases are major contributors to mortality and morbidity in the developing world, yet fail to offer a compelling market opportunity for new pharmaceutical development. The industry can and should contribute to such efforts by collaborating with academic and non-profit organisations involved in such endeavours.

There is an urgent need for new drugs to treat tropical parasitic diseases like malaria, leishmaniasis, trypanosomiasis and schistosomiasis. These diseases affect hundreds of millions of people and are major contributors to mortality and morbidity in the developing world.

Malarial disease caused by the parasite Plasmodium falciparum is responsible for more than a million deaths annually. Once-effective therapies like chloroquine and sulfadoxine-pyrimethamine have become practically useless in recent years due to the emergence of drug resistance. The currently available therapies for trypanosomiasis suffer from significant toxicity and / or limited efficacy. In Chagas’ disease therapy for example, the use of benznidazole and nifurtimox is associated with undesirable side effects and, more significantly, does not address the chronic form of disease that causes cardiomyopathy. Treatment options for the cerebral form of Sleeping Sickness are similarly poor. The arsenic derivative melarsoprol causes fatal encephalopathy in ~5 per cent of patients while the much safer alternative eflornithine is difficult to administer in rural settings and is effective only in disease caused by T. brucei gambiense. A cheap and effective drug is available for schistosomiasis—the re-purposed veterinary drug praziquantel—but with hundreds of millions infected and resistance on the horizon, a back-up drug is needed.

Few pharmaceutical companies are pursuing antiparasitic drug discovery in a serious way, despite clear evidence of medical need. Among those companies that are engaged, Novartis and its Institute for Tropical Diseases in Singapore, and GlaxoSmithKline and its ongoing work with Medicines for Malaria Venture (MMV) bear mention. From a business perspective, it is unsurprising that parasitic diseases attract little attention from the industry. The market forces that are so effective at driving pharmaceutical development in the industrialised world are largely absent in the regions of the world where parasitic diseases figure prominently. However, it is also clear that the pharmaceutical industry, with its incredible potential to impact human health for the better, bears a special responsibility to weigh medical need alongside market opportunity in arranging its priorities. This was a less controversial position in past decades than it is perhaps in the post-merger climate of the industry today. Therefore, those companies that are engaged in antiparasitic drug discovery have to be commended and encouraged.

A path forward
With the industry less than fully engaged, the responsibility of discovery and development of new antiparasitics has largely fallen on academic researchers and not-for-profit drug discovery organisations. These efforts have been significantly boosted in the past decade by the munificence of major philanthropic organisations including the Wellcome Trust, the Sandler Foundation and most notably, the Gates Foundation. This much needed funding has been directed mostly to University-based drug discovery consortia and not-for-profit drug development organisations like MMV and Drugs for Neglected Diseases initiative (DNDi). These groups have in turn recruited scientists with drug discovery and development experience out of the pharmaceutical industry.

What has emerged in the past decade then is a navigable pathway for drug discovery for tropical parasitic diseases. The efforts of parasite biologists in academia reveal a variety of new drug targets that are validated by traditional genetic and / or newer RNA-silencing techniques. High-throughput assays are then developed at University-based drug discovery centres, thereby allowing the screening of large small-molecule libraries. Chemical optimisation of leads is then carried out in those same centres, or elsewhere with funding and oversight from organisations like MMV or DNDi. The latter organisations have the resources and development expertise to bring preclinical candidates though IND-enabling studies and into human clinical trials. While this drug discovery paradigm appears to circumvent the pharmaceutical industry, industry partnerships can and do play important roles at various stages in the discovery and development process. Examples of such collaborations are provided in the following section, with an emphasis on some of the recent success stories.

A role for the industry
Current drug discovery efforts for parasitic disease are focussed either on improving existing agents or on exploiting new drug targets in parasite biology to identify first-in-class agents. Presented below are some recent examples from various stages of the discovery process (Table 1). One of the more interesting findings of the past decade is that fully synthetic molecules bearing a peroxide function can exhibit antimalarial properties quite comparable to artemisinin—the current gold standard in antimalarial therapy. The advent of the synthetic peroxides portends future combination therapies that confer a single-dose cure and are inexpensive to manufacture and administer. The 1,2,4-trioxolane OZ277 (Figure 1) is the most advanced of the synthetic peroxides, having progressed into Phase II clinical trials. This class of antimalarials was discovered by a group at the University of Nebraska and their clinical development is being managed by MMV in partnership with the Indian drug firm Ranbaxy. Although OZ277 itself will not move beyond Phase II for pharmacokinetic reasons, the improved variant OZ439 which confers single-dose oral cure in animal models is progressing towards human trials.

A number of groups are developing improved quinoline antimalarials that are effective against chloroquine-resistant parasites. Notable among such molecules are second-generation amodiaquine analogs dubbed isoquines. The isoquines were designed by a group at the University of Liverpool with the objective of eliminating the hepatotoxic effects occasionally associated with amodiaquine therapy. Isoquines are regioisomeric analogs of amodiaquine that cannot form the reactive quinone imine intermediates thought to be responsible for amodiaquine toxicity. Like amodiaquine, the isoquines are effective against chloroquine-resistant strains of P. falciparum. Among the various isoquines prepared, the N-tert butyl analog (Figure 1) was selected as a clinical candidate. The compound is being developed by MMV in partnership with GSK, with first-in-human dosing expected to have commenced in spring of 2008 according to the MMV website (www.mmv.org).

Lead optimisation is often neglected in academic drug discovery programmes, mostly for a lack of funds to support the significant synthetic chemistry and animal resources required. At least two models have emerged to successfully accomplish this work. Large, well funded academic centres like the Drug Discovery Unit at the University of Dundee employ their own teams of medicinal chemists, with many members recruited out of the industry. It is also possible to pursue lead optimisation within traditional academic groups (i.e. employing students and post-doctoral researchers), assuming that funding for such work can be secured. Another model moves beyond the academic setting and involves collaboration with industry researchers, managed and funded by organisations like MMV or DNDi. Representative of this approach is a falcipain inhibitor programme managed by MMV and involving the academic laboratory at UCSF that identified the falcipains as drug targets in malaria, and a team of experienced chemists and biologists from the GSK site in Tres Cantos, Spain. Here then is an example of a large pharmaceutical company making available its drug discovery expertise and human resources to advance the discovery of new antiparasitic therapies. 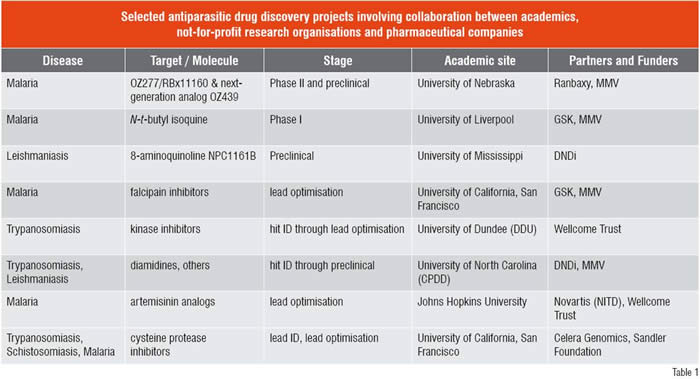 The collaborative model described above requires that industry partners devote the full-time efforts of at least some of their scientists to a therapeutic area with little market opportunity. Many companies are reluctant to do this, even if the costs of the research effort are subsidised by organisations like MMV or DNDi. At earlier stages of the discovery process, however, the industry can contribute in ways that have no significant impact on the bottom line and yet can significantly advance efforts to identify new antiparasitic agents. A number of the recently identified drug targets in parasitic disease have close homologs in other diseases where a more significant market incentive exists. Cysteine proteases, kinases and farnesyltransferases are but three examples that are being explored. The human proteases cathepsin K and cathepsin S are validated drug targets in osteoporosis and autoimmune disease, respectively. Screening libraries of cathepsin inhibitors from industry is then a pragmatic approach to quickly identify high quality lead compounds that inhibit homologous parasitic proteases like cruzain and falcipain. The success of this approach requires only a willingness on behalf of the pharma partner to allow screening of parts of its compound collection. In fact, a number of large and small companies have done just this, typically under agreements that stipulate use of the libraries for research purposes only. Should a clinical candidate eventually emerge from such efforts, a licensing agreement could be arranged between the owner of the intellectual property and the organisation seeking to develop the compound. This paradigm is very powerful as it leverages chemical entities already in hand for a new purpose. It is akin to the re-purposing of approved drugs except that it occurs at an earlier stage and therefore allows for optimisation of molecular properties appropriate to the antiparasitic indication.

The future
The prospects are good that the next decade will see entirely new classes of antiparasitic agents brought into clinical use. As with any drug discovery effort, significant hurdles remain; some of these have been identified here. The emergence of organisations like MMV, DNDi and iOWH, made possible by major philanthropy, has created a clear path for the clinical development of promising new agents. At the same time, new drug targets will continue to emerge as our understanding of parasite biology expands at an ever increasing rate in a post-genomics era. Moving from promising drug target to promising drug candidate remains the central challenge. How will quality lead molecules be identified? How will the properties of these molecules be optimised to yield drug candidates with a reasonable chance of clinical success? Who will do this work and how will it be funded? Some likely answers to these important questions have been provided here. There can be little doubt that sharing of information and coordination of efforts between academics, foundations, and industrial partners will be essential components of future successes. 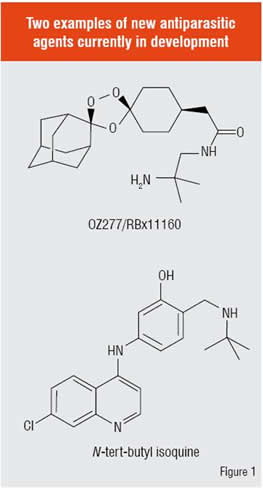 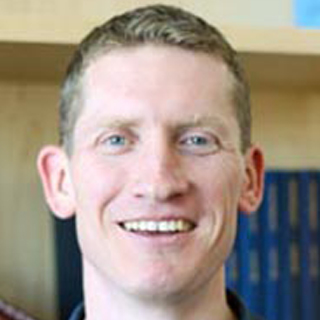 Adam Renslo is Associate Director of Chemistry at the Small Molecule Discovery Center and holds an adjunct appointment at the University of California, San Francisco, USA. Previously, he led antibacterial and antifungal discovery chemistry teams at Vicuron Pharmaceuticals.