Among the more recent applications of colloidal drug delivery systems (DDS), intranasal (IN) application is drawing a great attention from the researchers. This highly tolerated route for drug administration can allow designing specific formulation aimed at a local action, or to pulmonary delivery and systemic drug adsorption, or also to the nose-to-brain delivery to reach some central nervous systems areas by-passing the natural barriers that impede most drugs to act at that level. Merging these opportunities offered by the IN route with the features and performances of innovative DDS would support the clinicians with highly potent and safe therapeutic tools in the near future..

Over the last two decades, science has made enormous progress in nanotechnology and in the applications in various medical fields, opening the route for efficient gene therapy, personalised medicine, and other innovative therapeutic strategies. Controlled release or targeting to specific sites or tissues of active compounds, even at a sub-cellular level, can dramatically increase their pharmacological efficacy and reduce most side effects.

Among the newly explored routes of administration of these DDS, the IN one holds promise for therapy and clinical uses. Microspheres (MPs), microemulsions, polymeric and inorganic nanoparticles (NPs), lipid nanocarriers, liposomes, dendrimers, quantum dots (QDs), virus-like and self-assembling protein NPs, nanogels and nanoemulsions are the most investigated carriers for IN application in the recent years. These systems make it possible to administer either lipophilic or hydrophilic drugs, gene material, proteins or peptides via IN for various therapeutic scopes.

IN administration opens the way to different sites for drug action

We know that a drug loaded in a colloidal carrier and applied into the nasal cavity can exert its action at different levels: topical, pulmonary, systemic, and also cerebral through the so-called ‘noseto-brain’ (N2B) route. NPs cross the mucosal membrane better than MPs, for their smaller size and volume, since the tight junction pores of nasal epithelium are smaller than 15nm. Hence, larger particles, such as MPs, do not cross the epithelium and release the drug in the mucosa where it is absorbed by passive diffusion to reach the systemic circulation. Size apart, the surface charge of these carriers can prolong the time of contact with the nasal mucosa. Since mucin possesses a net negative charge, positively charged MPs, for instance those made with chitosan, will adhere longer to the nasal mucosa, improving the time of diffusion of the drug and its effectiveness especially at a local level. 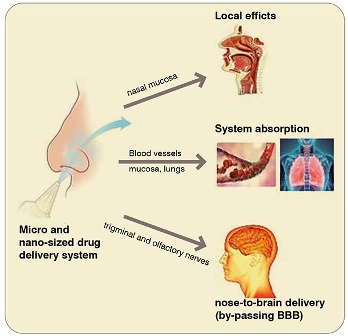 Nano-sized carriers are the principal subject of studies for the N2B route. This pathway has generated considerable interest among researchers, since the nasal cavity is the only part of our body that connects the central nervous system (CNS) with the external environment: the olfactory nerves are not protected by the blood brain barrier (BBB) and arrive directly in the nasal cavity where they can re-uptake the drug via intracellular and extracellular pathways and lead it directly into the CNS. For instance, recently Cometa et al., prepared solid lipid nano-carriers (SLN) loaded with dopamine for IN administration. The aim was to allow the drug to reach the brain, since the free form is not able to cross the BBB because its hydrophilicity, and to find a valid alternative to conventional therapy (L-Dopa) for Parkinson's disease.

IN-DDS has also shown excellent results at systemic and pulmonary levels. Since many years the scientific community has recognised then as a valid alternative to oral and parenteral routes to bypass many of the associated drawbacks. Many studies have shown that parameters such as absorption, bioavailability, efficacy and rapid onset of the pharmacological activity are clearly improved for intranasally applied drugs comparing to oral and parenteral administration.

Examples of how IN-DDS can act at the various levels

A microemulsion composed of oleic acid, Tween 80 and propylene glycoland loaded with diazepam showed a better pharmacodynamic profile in epileptic seizures after IN application compared to a clinically available drug intravenous solution. To improve the drug absorption and bioavailability, authors realised that addition of chitosan was advantageous. Chitosan is a positively charge and mucoadhesive polymer, able to increase the time of contact between the DDS and the nasal mucosa and to open the tight junctions between epithelium cells, a consequent increase of drug absorption. For instance, diazepam flux through porcine nasal mucosa was 6-times higher for the optimised DDS formulation that for the drug parenteral solution. Also the in vivo pharmacokinetic data testified a better performance of the chitosan-added diazepam microemulsion.

Chlorpheniramine maleate (CPM) is associated with a low oral bioavailability. In order to improve this parameter and reduce the frequency of administration, a system based on chitosan NPs loaded with CPM and embebbed in a Poloxamer 407 and Carbopol 934P-based mucoadhesive thermoreversible gel was designed to act direct in the nasal cavity for the management of allergic rhinitis. The in vitro drug permeation studies show a percentage drug permeation in the range of 71-91 per cent. In vivo studies on rabbits provided a significantly higher bioavailability of CPM for the IN formulation than the oral drug solution.

Propst et al., demonstrated that nano-aerosolised QDs loaded with levofloxacin and administered intranasally are active at a lung level to treat pulmonary murine Francisellatularensis subsp. novicida infection. The IN nanoformulation showed to reduce the required effective drug dose by 8-fold compared to an intraperitoneal injection and by 94-fold compared to oral conventional administration.

A field with undisclosed potentialities

Many studies have been published in recent years in which IN-DDS have been designed to deliver vaccines or gene materials, such as an mRNA encoding for tumor-associated antigens which was encapsulated in liposomes to protect it from nucleases and guide it to the target site (lung cancer). 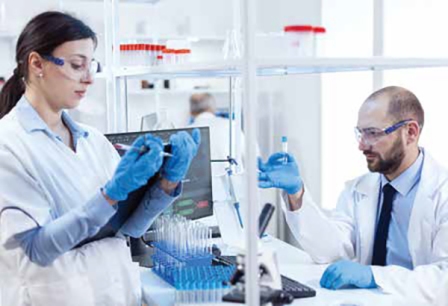 The scientific community is also giving a substantialinterest on IN-DDS as a possible strategy to overcome the problems of traditional vaccines in fighting the COVID-19 pandemic event or other viral infections.

What we reported are just few examples showing the relevant outcomes achieved in IN-DDS research. Many more are actively being published in the literature reported supporting the progress of nanotechnology science aiming at safe, personalised and precision medicine. 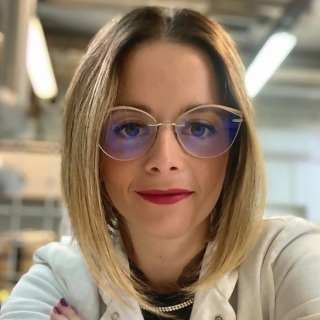 Rosamaria Lombardo received her Master's degree in Pharmacy at the University of Catania (Catania, Italy) in 2018. Within the thesis work she frequented the Italian Research Council (CNR) with a study onionic liquids withantimicrobial and antitumor activity. In 2019 she spent a period at School of Pharmacy, University of Nottingham (U.K.), with an Erasmus Plus Traineeship project on "How acute pain turns into chronic paindepending on protein translation in the axon, andcordycepin action".

At present she is a PhD student in Neuroscience at the same University, under the supervision of Prof. Rosario Pignatello and developing a project on "Intranasal drug delivery systems forneurological diseases". A side study is dealing with the production of food-grade carrier systems for the controlled release of natural active compounds. 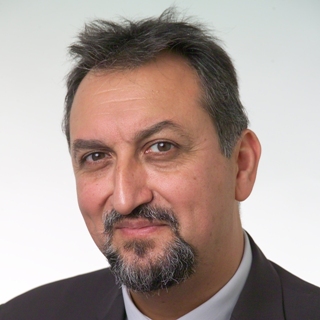 Rosario Pignatello is full professor of pharmaceutical technology and legislation at the University of Catania (Italy). He is at present the Director of the Department of Drug and Health Sciences of the same university. He is coauthor of about 160 scientific papers dealing with pharmaceutical technology and innovative drug delivery systems, in particular for ophthalmic application. He is the scientific responsible of NANO-i, the Research Centre for Ocular Nanotechnology of the University of Catania.