Purification of compounds is often the rate-limiting step during the discovery of novel compounds. In a typical discovery sequence, chemistry can account for as much as 20 percent of the total task-time. Automated flash chromatography systems allow unattended separation of both synthesized compounds and those isolated from natural sources, freeing chemists to perform other tasks and help advance the project more quickly. Automated systems also help reduce errors and repurifications and are able to separate difficult samples more easily than manual methods.

Polymethoxyflavones (PMFs) have been isolated predominately from Citrus species. These are interesting due to a wide spectrum of biological activities. In vitro and in vivo studies suggest that PMFs exhibit protective effects against cancer.

Five polymethoxyflavones and two hydroxylated polymethoxyflavones were isolated from cold-pressed sweet orange peel extract. The initial separation was performed on a Teledyne Isco flash system using a 120g pre-packed Silica gel column with a hexane-ethyl acetate gradient. 10g of orange peel extract was dissolved in 2ml dichloromethane and 2ml hexanes. Fractions were collected by monitoring their absorbance at 254 nm. The fractions were evaluated by LC-ESI-MS. Preparative High Pressure Liquid Chromatography was used to further purify the fractions. 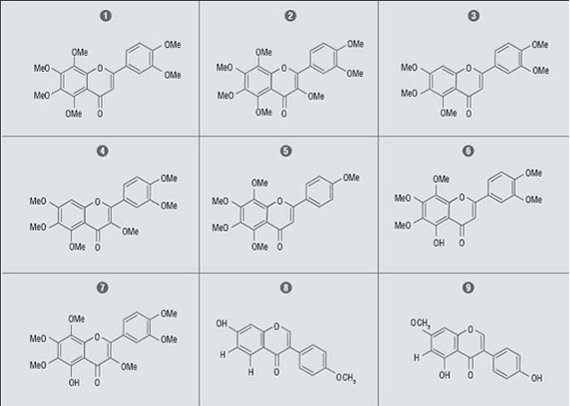 Butea superba is a legume with the common name “red Kwao Krua” in Thailand. This species has shown anti-proliferation effects on the growth of MCF-7 and HeLa cells.

The dried tubers of Butea superba were extracted with methanol and the methanolic extract was re-extracted with hexane followed by CH3Cl. The chloroform extract was separated by flash chromatography with 100% CH3Cl with 1% step gradients of methanol. The compounds were identified by spectral comparison with reported values in the literature without further purification. Cytotoxicity was determined by MTT (3-[4,5-dimethylthiazol-2-yl]-2,5-diphenyl tetrazolium bromide) assay. Compounds (8) and (9) showed moderate cytotoxic activity on KB cell lines.

Lee et al have used flash chromatography to purify reaction mixtures in their work on synthesizing phenanthrene based tylophorine derivatives (PBTs). The authors suggest that novel synthetic PBT analogs may exhibit some desirable properties including possibly increased cytotoxicity and fewer side effects than presently known molecules.

An automated flash system was used to purify the products of reactions involving reductions, hydrolysis, and peptide bond condensations. The peptide bond condensation product was purified with on silica gel with an ethyl acetate / hexane gradient. The other reaction products were purified with methanol / methylene chloride gradients on silica gel. 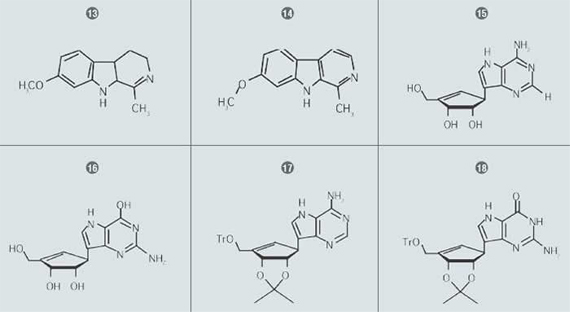 Readily available pre-packed columns containing functionalised and other specialty media provide the chemist with a straightforward way to purify compounds that would not readily separate on normal silica gel. Both examples below use amine functionalised silica although other column chemistries such as C18 are available.

The plant Banisteria caapi is the source of the alkaloid harmine, known for its hallucinogenic properties. Harmaline (13) was purified from Florisil using a chloroform-methanol gradient. The dried vine was refluxed in methanol. The extract was dried and extracted into chloroform with 5% ammonium hydroxide. Harmaline required 100% methanol to elute from Florisil. We found that harmine (14) would elute readily from silica gel using methylene chloride, but harmaline would only elute slowly with a broad peak even with 100% methanol. We then used a RediSep® Amine functionalised column using a gradient from 50 to 100% ethyl acetate in hexane. Although the harmaline still produces a broad peak, it is much more compact than the run from silica gel. Further optimisation of the gradient could be employed to sharpen the harmaline peak. The use of amine functionalised silica in this example illustrates the ability to separate even difficult samples. 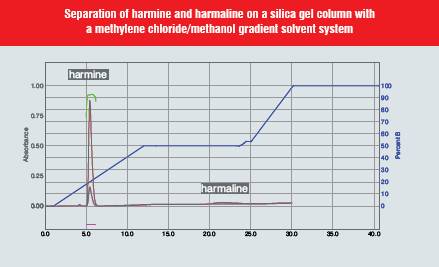 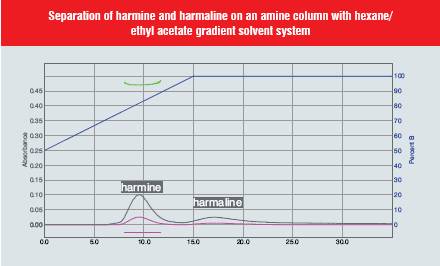 Of particular interest was their use of amine functionalised silica gel and prepacked columns (RediSep® Amine, Teledyne Isco) in the purification of (15) and (16). It is doubtful that these separations would have proceeded easily with only bare silica, as was illustrated in the example of Banisteria caapi, above.

(1’S,2’S,3’R)-4-Amino-7-(2’,3’-dihydroxy-4’-hydroxymethyl-4’-cyclopenten1’-yl)-5H-pyrrolo [3,2-d]pyramidine (9-deazaneplanocin) (15) was prepared by stirring a methanolic HCl solution of (17) for 2 hours. This was followed by evaporation under reduced pressure and co-evaporation with MeOH. The residue was dissolved in MeOH, neutralised with NaHCO3 filtered and concentrated to dryness. This sample was purified with column chromatography using amine functionalised silica gel. This compound was subsequently found to show moderate anti HIV-1 activity.

(1’S,2’S,3’R)-9-(2’,3’-Dihdroxy-4’-hyrdoxymethyl-4’- cyclopenten-1’-yl)-deazaguanosine (16) was synthesised by stirring a methanolic HCl solution of (18) for two hours, followed by filtration and concentration as was performed for Compound 1. This residue was purified via automated flash chromatography using a Teledyne Isco RediSep® Amine column. This compound (EC50 2.5 uM) was found to exhibit moderate activity without cytotoxicity against Punta Toro virus.