Medical Counter Measures (MCMs) are being developed on a global scale to treat and prevent pandemic disease agents as well as chemical and radiological threats, both accidental and intentional. While this field is recognised as a burgeoning biomedical product sub-sector in the USA, China is actually the world’s second largest developer of MCMs and an example of the important contribution of Asia-Pacific countries to this evolving business landscape, which we will describe in our forthcoming article.

Beginning in the mid-1990s, incidents involving easily we aponised and accessible agents such as anthrax, a commonly occurring bacterium, and sarin, a chemical toxin from a commonly used family of pesticides, demonstrated the growing threat of Chemical, Biological, Radiological and Nuclear (CBRN) agents as weapons for bioterror attacks. At the same time, there was increasing awareness of the broadening scope and frequency of naturally occurring pandemics. Thus the category of biological agents was considered to include: emerging infectious diseases such as Severe Acute Respiratory Syndrome (SARS); re-emerging infectious diseases like measles and pertussis; and, weaponised biological agents such as smallpox and anthrax. SARS was among the first of the emerging infections of the 21st Century to illustrate two significant characteristics of the new plagues: the first is their potential for significant direct (i.e., medical and government program costs) and indirect economic impacts (e.g., Asia-Pacific economy lost nearly US$40 billion); and secondly, that even relatively quick-kill infections can easily become geographically widespread due to the rapidity of modern travel and the global nature of business (i.e., approximately 250 cases of SARS in 10 countries spread within a few days from a professor, who had been treating SARS patients in the Chinese countryside and then traveled to a popular hotel in Hong Kong)1.  While these factors are mostly accidental, intentional (mostly illegal) actions have complicated and broadened the threat spectrum for CBRN. Bioterrorists have used the US mail system and the Japanese subways as vehicles for transmission for anthrax and sarin exposure, respectively. Similarly in 2003, monkeypox virus entered the US through imported Gambian rats sold as exotic pets, and international smuggling of birds is thought to be a possible pathway for the bird flu to enter the country2.    Many of the identified threats, even from pathogens known to be highly lethal and transmissible, did not have preventive vaccines or effective treatment options beyond supportive care. In response to these threats, it became imperative to the US Government (USG) that a biodefense system of Medical Counter Measures (collectively, MCMs) had to be developed.

Consequently, the US is the most active country for MCM R&D, however, nearly half of the global pipeline of MCMs is located outside the US, China, for example, is the world’s second most prolific country in terms of its MCM pipeline, as well as being the most active in this field among Asian countries. The 52 MCMs in development in China make up 49 per cent of the Asian MCM pipeline, and China is developing roughly 2.5 times as many MCMs as the next most active Asian country - South Korea (19). Following South Korea is India, with 15, and Japan with 9. Development numbers quickly drop off from there with Hong Kong and Singapore each developing 3, Taiwan developing 2, and Thailand and Malaysia each developing 1 (Figure 1). 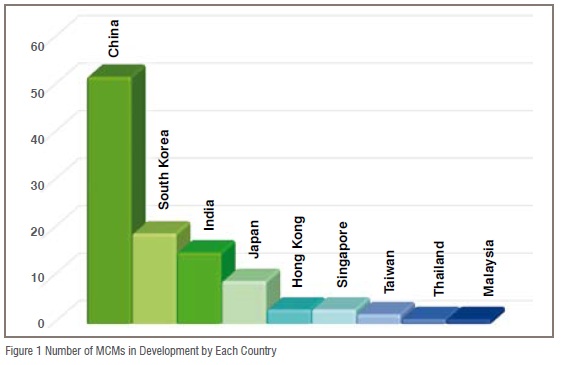 Data accumulated by Tufts CSDD over the last 10 years from public sources and its own proprietary database indicate that MCM developers in Asia are mainly small to medium sized enterprises, privately owned, and are somewhat more likely to describe themselves as biotech rather than pharma companies. 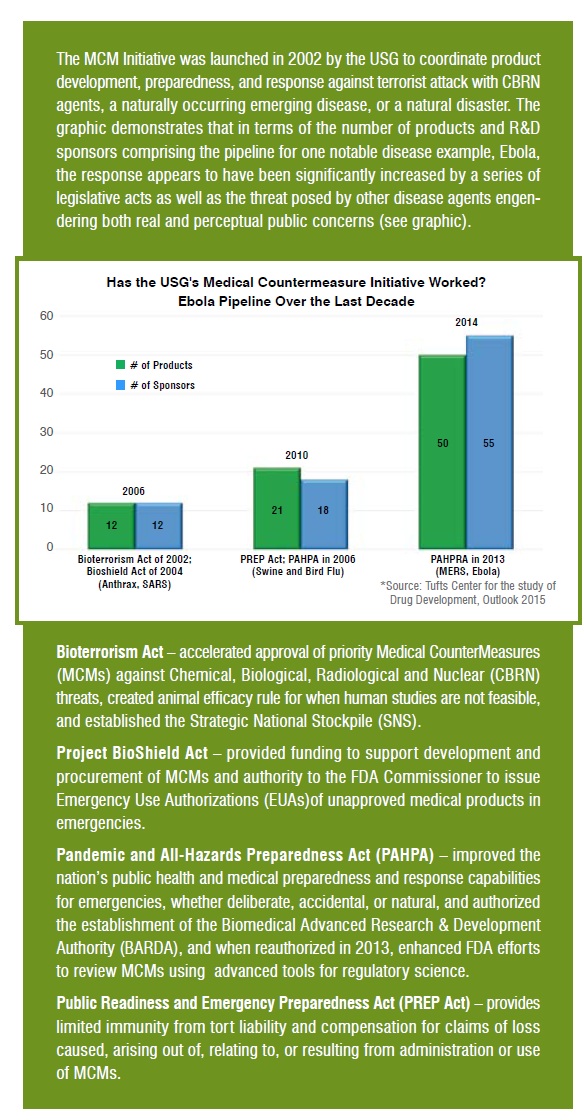 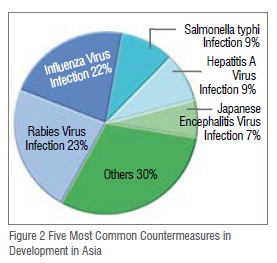 Rabies, recognised by the WHO as a re-emerging threat in many Asian countries, is fatal in almost all instances3. However, it is also considered a highly preventable disease through vaccination programmes, and is among the top five most common countermeasures on a world scale, as well as in Asia. This position may be largely due to the attention it receives in the Asian pipeline. Currently, there are 40 rabies countermeasures in development around the world, 24 of which are being developed in Asia (60 per cent) (Figure 3). 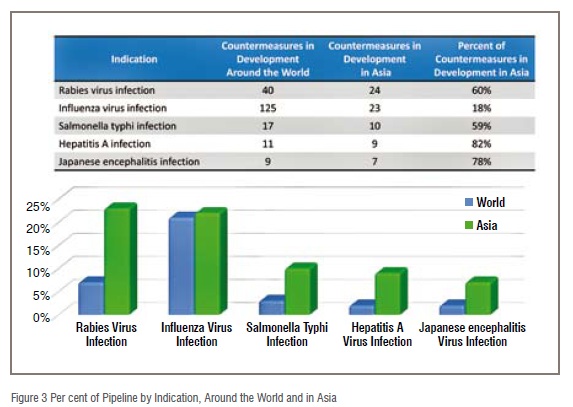 Influenza, which periodically causes pandemics that are disruptive socially and economically, especially in Asia, receives a great deal of attention both in Asia and on a world scale. Researchers in Asia are currently developing 18 per cent of the influenza countermeasures in development around the world, and these countermeasures make up 22 per cent of all MCMs in development in Asia, a percentage similar to that of the worldwide pipeline (Figure 3).

Unsurprisingly, among MCM developers in Asia, emerging and re-emerging diseases are a top priority. Eleven of the twenty disease indications for which countermeasures are in development in Asia are for emerging or re-emerging diseases (as opposed to those for food-borne illness or biodefense).In fact, these 11 indications account for 72 per cent of the MCM pipeline in Asia (Figure 4.) In addition to the previously mentioned diseases, researchers are developing countermeasures for threats such as drug-resistant tuberculosis, dengue fever, chikungunya, viral hemorrhagic fever, and Zika.

Emerging and re-emerging diseases pose a particular threat in Asian countries, and are consistently listed among the top non-traditional threats in the region. The WHO is especially watchful of diseases like dengue and avian influenza, which have caused epidemics in the past, and Ebola and MERS-CoV, which have not had outbreaks in the region but could have devastating results if one occurred.4

The reasons these diseases pose such a threat in the region are many, and have been described as the result of “complex, dynamic systems in which biological, social, ecological, and technological processes interconnect.”5 Expanding cities and farmlands allow increased interactions between humans and vectors of these diseases such as bats, and areas of dense populations allow the diseases to be easily transmitted from person to person. Many countries in the region also lack the healthcare infrastructure to treat those affected by these diseases, let alone contain or prevent an outbreak should one begin.

Hepatitis A typifies the complexity of the threat posed by food-borne illness due to its somewhat paradoxical nature. The symptoms and severity of Hepatitis A increase the older the patient is at time of exposure, with infants and children often showing no symptoms when exposed. A study by Nina Barzaga indicated that in the 1980s in many Asian countries like South Korea, China, and Thailand, 85 per cent-95 per cent of the population tested positive for hepatitis A antibodies by age 10. However, likely due to improvements in the quality of drinking water, hygiene, and sanitation, by the 1990’s, this percentage of exposure was not reached until 30 years of age, and in some countries, 50 years of age6.  This meant that while conditions were improving, people were being exposed to the hepatitis A virus at a later age, when it is much more dangerous, and created the potential for outbreaks of the disease. With the increased risk of an outbreak comes the increased need for an effective countermeasure.

Other food-borne illnesses for which countermeasures are in development include clostridium botulinum (botulism), and several forms of Shigella. 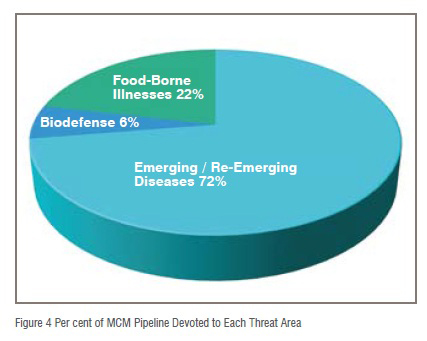 While this apparent lack of attention to biodefense countermeasures is likely a complicated issue, a 2012 paper by Masamichi Minhata summarised the attitudes of researchers in Asia quite well. “The risk that most concerned practicing scientists was the scenario of pathogens under research ‘accidentally infecting people or animals…’more than the risk of theft or advertent use of agents for destructive purposes…”7 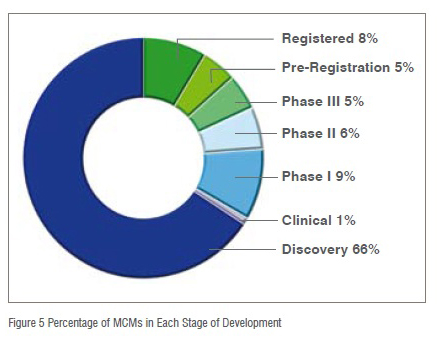 Despite the fact that just over half of the current MCM pipeline is based in the US, even there the legislative scheme is complex, the resulting government infrastructure variable, and the funding stream uncertain. Consequently, the shape of the global industry landscape that has emerged in response has been somewhat changeable and uneven. This daunting reality was evident during the recent Ebola outbreak in which the impact of MCMs on the course of the epidemic was viewed as too little, too late. This betokens urgent questions regarding whether public and private sector investment and coordination worldwide are sufficient to create a R&D sub-sector capable of meeting even the current known public health needs for MCMs, let alone those of an unknown future? 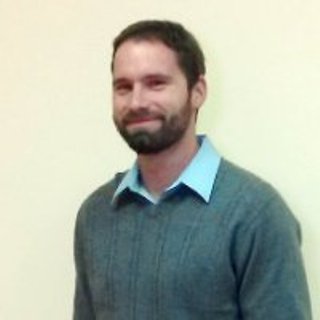 Zachary Peter Smith completed his B.S. at Florida Southern College, and completed his M.A. at Brandeis University. He has worked as a research assistant at a variety of labs including the Etter Lab at the University of Massachusetts, and the Evolutionary Psychology Lab at Harvard University. 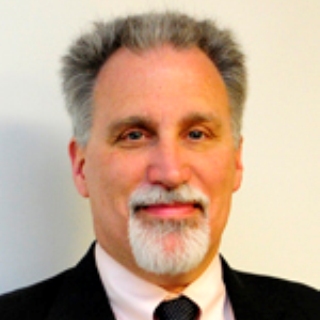 Christopher-Paul Milne joined the Tufts Center for the Study of Drug Development (Tufts CSDD) in 1998 as a Senior Research Fellow in order to address legal and regulatory issues. His current research interests include: challenges to the R&D of new drugs; innovation capacity in the developing world; incentive programs for pediatric studies, orphan products, and neglected diseases; assessing the impact of regulatory policy; and, tracking progress of new initiatives to improve safety and efficacy and exploratory development such as Regulatory Science, Translational Medicine and Personalized Medicine. He is currently Associate Director of the Tufts CSDD, Research Assistant Professor at Tufts Medical School, a member of the Editorial Board of the Food & Drug Law Journal, and an Honorary Fellow at the University of Edinburgh.