Over the past decade, a plethora of comments have highlighted a decline in Pharma R&D productivity. Several causes have been claimed including tighter regulation leading to even higher attrition as well as increasing costs. Another explanation has been that the biological targets against which drugs are designed have become more challenging. In other words the low hanging fruits, or ‘easy’ targets, have already been picked, leaving only ‘harder’ targets. While this may be disputable as classical targets classes continue to represent a significant part of companies pipelines, several major therapeutic areas are clearly facing a paucity of well validated targets.

The biological targets landscape is changing

Before discussing the biological targets landscape, it may actually be pertinent to explain the basic concept of a biological target, for those not familiar with the meaning. The usual metaphor of the ‘key/lock’ is the simplest way to describe the principle of the majoritydrug approaches: a biological target is the ‘lock’ and a drug, or modality, is the‘key’. The ‘lock’ is typically a protein whose function is linked to a positive or negative biological effect. Thus, developing a drug usually consists in increasing or decreasing the level of a protein or of its function. In addition, it is important to consider that the ‘lock’ may be located outside (extracellular) or inside (intracellular) a cell. Typically, accessing intracellular ‘locks’ requires smaller drugs, or ‘keys’.

With the development of genomics and biomarkers, as well as better access to human tissue samples, genetic links between diseases and specific biological targets are getting stronger. However, these targets with strong human validation are in many cases deemed ‘undruggable’. Put simply, these ‘locks’ typically require larger ‘keys’, but are often intracellular, which is usually not compatible with these larger ‘keys’. Based on this, two main options are then to be considered: avoiding the targets (since these are ‘too hard’ to drug), and therefore indirectly deceiving patients as well as failing the essential mission of the pharmaceutical industry; or novel approaches are to be developed to turn these targets into tractable ones, embracing the associated higher risk.

Beyond risk-aversion, an additional factor stands in the way of addressing these ‘undruggable’ targets. Indeed, from a therapeutic modality point-of-view, the pharmaceutical industry has a heavily silo-biased structure. A stereotype is to consider on one hand small molecules and on the other hand biologics. Each modality is typically pursued in isolation from others, as is the case of the majority of biotechs, which often do not have the critical mass to have capabilities across modalities. The situation is actually very similar in Big Pharma, with often limited collaboration across small molecules and biologics technologies.A silo-based structure is not per se an impediment to drug discovery. Indeed ‘classical’ modalities, namely small molecules and biologics are still offering many opportunities. 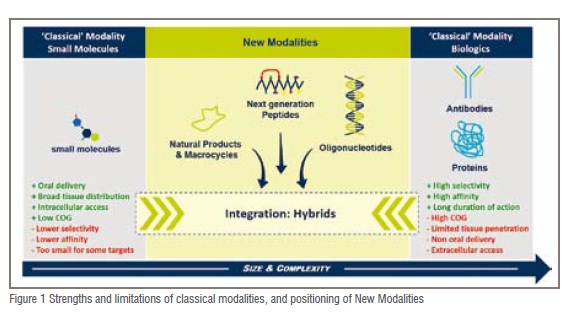 Small molecules offer the advantage to be an established technology, with a robust drug discovery process, which usually enables oral delivery and potentially broad tissue distribution, including access to intracellular targets. In addition, costs of good are usually low. However, small molecules are typically less selective, leading sometimes to less optimal safety profiles, and are also less suited to some of the novel target types because they are ‘too small’ to interfere with these.

Rather than applying theexisting silo mentality to challenging targets, pharmaceutical research is presented with the opportunity to develop New Modalities. In addition, these may be brought together, potentially combining them, to address the challenges associated with the novelty of these targets. New Modalities cover a broad range of molecular entities and representative examplesare presented below. 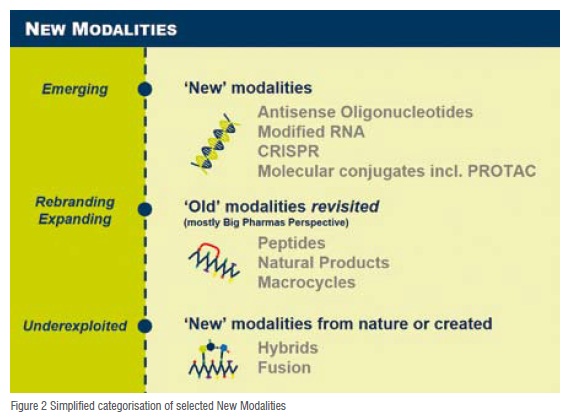 Peptides can be described as tiny proteins, and like their bigger sisters, are constituted of aminoacids. This modality has already resulted in many marketed drugs in a range of therapeutic areas, especially oncology and metabolic diseases. However, one of the key limitation of peptides is their low stability in blood and their usually low permeability, limiting both oral delivery and access to intracellular targets. Excitingly, a new generation of peptides is now offering novel options leading to several drug candidates. Recent developments include bringing together a small molecule and a peptide to form ‘bicyclic’ motifs. The new architecture offers antibody-like potency with small molecule-like pharmacokinetics. Another example are the so-called ‘stapled’ peptides, in which, again, small molecules components are merged with a peptide to form a stabilised molecule, with stronger stability, and whose active shape as a drug is locked by the small molecule component. This specific modification has also been shown to be potentially amenable to intracellular targets, opening a new range of opportunities for this modality. Several next generation peptides are now being tested in clinical trials, including POL7080 (Polyphor, antibiotic) and ALRN-6924 (Aileron, oncology).

Perhaps in a similar way than peptides mimic proteins, oligonucleotide-based therapies copy the biomolecules at the core of living organisms: DNA and RNA.DNA carries the genetic code, which can be read and transferred to RNA. The RNA carries the message inside the cell to produce a given protein for which the RNA is coding. Interfering with this series of events can therefore regulate the level of a given protein. For example, Antisense Oligonucleotides (ASOs) block a specific code on RNA. This technology is well suited to the cases where a beneficial therapeutic effect is expected to be gained from limiting the amount of a protein. Interestingly, the same modality can also be used to target another mechanism within cells, leading in this case to an increase in the amount of protein. Conceptually, oligonucleotide approaches differ from the classical ‘key-lock’ concept: in this case the drug aims at removing or increasing the ‘lock’ rather than blocking or activating it with a ‘key’ (Figure 3).Examples ofmarketed drugs based on these technologies includethe recently approved Etiplirsen (Duchenne Muscular Dystrophy) and Nusinersen (spinal muscular atrophy). 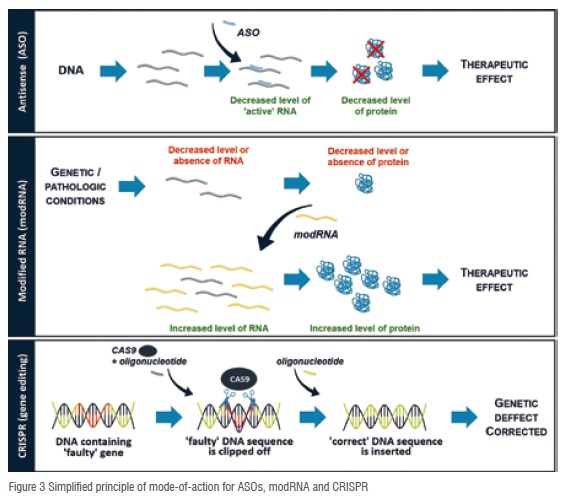 Modified RNA (modRNA) are a very different type of oligonucleotides: they mimic directly the whole code for a protein. Thus, this modality results in the production of the encoded protein, and is therefore relevant in diseases where absence of a protein is inducing negative events. In this respect, modRNA corrects a deficiency by providing it via another mean: it generates a ‘lock’ that is missing (Figure 3). While this technology is still emerging, several clinical trials have now been initiated, including for AZD8601, a regenerative treatment for patients with heart failure.

With the prospect of correcting genetic defects leading to serious conditions, the ‘CRISPR-CAS9’ technology is gaining a lot traction. The system utilises an enzyme (CAS9), which acts as ‘molecular scissors’, clipping a portion of DNA selected by an oligonucleotide. A ‘corrected’ DNA sequence can be provided to the system, which then uses the cell machinery to incorporate this ‘right’ sequence (Figure 3). While many challenges still have to be addressed, this genome-editing modality is being pursued by several companies.

The Rise of Hybrids

Beyond the examples of bicyclic and ‘stapled’ peptides mentioned before, a whole new range of hybrid modalities is appearing. For example, in the field of biologics, different entities have been merged, or ‘fused’. These include protein fusions and peptide-antibody fusions. Peptides aimed at different biological targets have also been fused into one single modality, as an “all-in-one” drug. Examples include MEDI0382, a dual molecule for the treatment of diabetes.

Classical small molecules are also being combined to offer novel ways of addressing biological targets. The so-called PROTAC technology can be applied when the presence of a protein has negative consequences. The approach brings in close proximity a protein regulating degradation with the ‘bad’ protein, which essentially receives a ‘death kiss’, leading to its degradation.

Perhaps the most peculiar example of hybrids is the field of drug-conjugates. The objective of these modalities is to ‘home’ a drug to a specific site in the body, a concept more broadly known as targeted delivery. Drug conjugates are formed by linking a drug modality to a homing modality, and result in a whole range of new hybrid modalities. The approach is of particular interest in oncology, where cytotoxic drugs can be specifically directed to tumours, as exemplified by Antibody-Drug-Conjugates (ADCs), and the related two marketed drugs Kadcyla and Adcentris. In addition, in the context of challenging targets, drug conjugates may open therapeutic windows for regenerative medicines. Indeed, regenerative approaches are typically aimed at inducing proliferation in a tissue needing repair, for example after a heart attack. Since proliferation has obviously to be triggered only in the relevant tissue, homing the drug to that tissue can be seen as a must.

While New Modalities demonstrate how moving beyond silos can address challenging targets, a question remains on how to achieve this. Indeed, the whole range of New Modalities requires a very diverse set of competences and knowledge. One option is to integrate these within the same company, essentially the strategy that Big Pharma often takes. While this certainly provides the range of skills together with critical mass, the typical heavy bureaucracy and creation of silo mentality, together with the usual appearance of ‘turf wars’ are clear impediments.

Perhaps a more promising strategy is to possess in house critical knowledge, in a selected number of modalities, and to work collaboratively with externals experts in the other modalities. These experts may be either specialist biotechs (e.g. Ionis for ASOs, Moderna for modRNA) or academic groups. Such a network-based approach brings together different modalities, avoiding silos. To achieve this, an external focus is an obvious prerequisite, and novel collaboration models, especially with academia, need to be designed. For example, the creation of a new type of collaboration is currently being explored between a world leading academic institution, the Max Planck Society in Germany, and a large pharmaceutical company, AstraZeneca. Thus, a new ‘satellite unit’, composed of AstraZeneca scientists directly embedded in the academic environment at the Max Planck Institute of Molecular Physiology, has been established. Researchers from industry and from academia are working side-by-side in the same laboratories to address challenging therapeutic targets through novel strategies in the New Modalities area. With this setting, novel innovation can be generated by uniting both industrial and academic strengths. Such innovative partnerships represent one attractive strategy to drive the field forward.

By leveraging New Modalities, either individually of by creating new ones through combination, the pharmaceutical industry is presented with the exciting prospect of drugging these challenging targets with strong human target validation. By approaching these targets with a mindset of integration of drug modalities rather than silos, and establishing strong networks across biotechs and academic groups, the most suited modality for a given biological target can be developed. Drugging well-validated targets, regardless of their complexity, is increasing the chances of success in clinical trials and will therefore revive R&D productivity. To achieve this New Modalities paradigm, scientists and decision-makers have, however, to be comfortable with exploring novel avenues, rather than desperately pushing ‘classical’ modalities on targets that can be drugged, but where human target validation is weak. Looking beyond the apparent higher risk, at first glance, of some New Modalities is a must: the prospects of much increased probability of success in the clinic, as a result of addressing well validated targets, is much more rewarding. It is time for the pharmaceutical industry to aim at the high hanging fruits. Most importantly, beyond the satisfaction of increased productivity, the most rewarding effect will be to provide life changing medicines to patients. 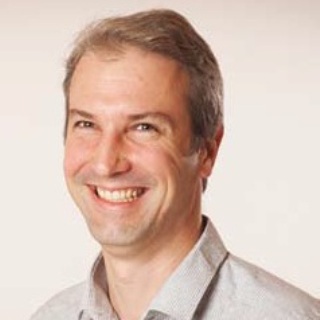 Eric Valeur has over 10 years drug discovery experience gained at Merck, Novartis and AstraZeneca. He is passionate about science but moreover about how bridges can be built between scientists and business professionals to deliver innovation. He holds a PhD in Organic chemistry from the University of Edinburgh, U.K. and an MBA from Imperial College London, U.K.