Biological tools and assays developed through unconventional nanofabrication techniques are proving to be inexpensive.

Discovering and developing a new drug is a costly and time-consuming process. Recent reports suggest that it costs around US$ 800 million (pre-tax) to bring a new drug to market. One approach to improve the efficiency (and lower the cost) of this process is to use appropriate models and assays early in the discovery phase to identify candidates that are likely to be safe and effective in human beings. Organismic assays are better and more predictive for testing putative therapeutics than molecular assays, but it is difficult and expensive to work with animals, and the relevance of these assays' results in humans is often low. Human cell-based assays-which are less complicated than many organismic assays-are an attractive option for drug screening because cells are human-like (i.e. they contain the human genome, enzymes, proteins, etc.). The ability to microengineer the environment surrounding a cell allows a better understanding of the response of a cell to its environment in a predictive manner. This understanding leads to more reproducible and meaningful assays.

Our research group has developed simple tools to study the behaviour of cells under controlled conditions. These tools allow fundamental mechanistic studies of cells to be performed that can lead to new assays for drug delivery and efficacy. The ultimate goal of this work is to develop highly parallel, inexpensive assays (cell-based, organismic, and molecular assays). Discussed here are some of the biological tools and assays developed in our laboratory and the methods by which they are fabricated. These devices often contain small, functional components that are fabricated using "unconventional" methods. These methods provide some benefits (e.g. a reduction in cost) over conventional methods.

Here, new methods are sought to fabricate small structures in a simple, inexpensive, and reproducible manner because:

1. It is advantageous to use systems that require small volumes of sample.
2. Tools used to probe and study cells are typically on a similar or smaller size scale than a cell (~10-50 ?m). Small length scales allow control over those aspects of the environment that influence the behaviour of the cell. Small tools can also exhibit useful, non-intuitive behaviours. For example, fluid flow through a channel with a small cross-section is laminar (i.e. non-turbulent). Laminar flow provides controlled delivery of drugs to cells in microchannels.
3. Assays developed on a small length scale can have high-throughput and are low-cost (on a per assay basis) because many assays can be processed in parallel. These attributes are well-suited for patient-specific therapy and population screening.

Although there is no formal definition of "conventional" fabrication, it is generally accepted that it includes photolithography-a state-of-the-art process in the field of industrial-scale micro and nanofabrication. Photolithography is a patterning process in which a focussed pattern of light is transferred to a substrate covered with a photosensitive material. Photolithography is the cornerstone technology used to pattern the components of computer chips and is largely responsible for the growth of the semiconductor industry over the past 50 years.

Although photolithography is a powerful tool, it is not a universally relevant fabrication technique because of its inherent limitations: it is expensive, limited in resolution by the diffraction of light, restricted to planar substrates and incompatible with many organic and biological materials. "Unconventional" methods to fabricate micro and nanostructures are developed to overcome one or more of these limitations. 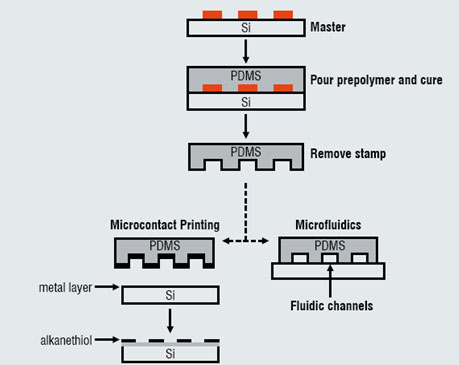 Figure 1: A schematic depiction of the formation of a PDMS stamp using a silicon (Si) master 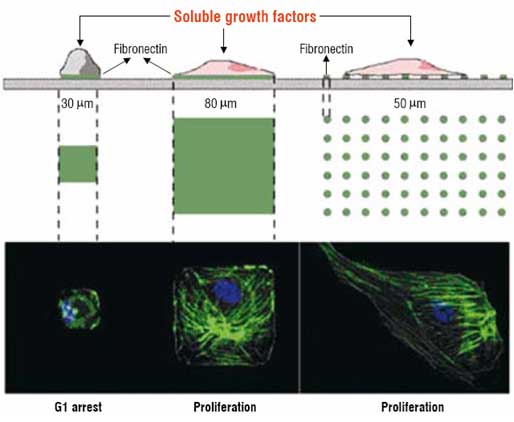 Figure 2: A demonstration of microcontact printing to pattern cells on a surface

Cells adhere selectively to a protein (fibronectin) that preferentially adsorbs onto regions of "bioselective" molecules patterned by microcontact printing. The cells adopt the shape of the patterns on the substrate and their ability to proliferate is dependent on the area of contact.

Soft lithography refers to a set of methods for fabricating or replicating structures using elastomeric stamps or moulds. It is called "soft" because it uses elastomeric materials, such as polydimethylsiloxane (PDMS). Figure 1 shows the general procedure for soft lithography. Casting and curing a prepolymer (e.g. PDMS) against a master generates an inverse replica of the master. Peeling the PDMS from the master forms the "stamp" or "mould". The master is a topographically patterned substrate and can either be purchased, or fabricated using photolithography. Multiple stamps can be formed from a single master, thereby reducing the reliance on conventional fabrication techniques. The soft nature of the stamp provides added processing capabilities (e.g. patterning on curved surfaces) that are not possible with conventional techniques. PDMS stamps are optically transparent and permeable to oxygen and carbon dioxide, properties that are useful for studying cells.

Two examples of techniques that utilise PDMS stamps are highlighted at the bottom of Figure 1. Microcontact printing uses the relief structures on a PDMS stamp to transfer patterns of inks (i.e. molecules, such as alkanethiols) onto the surface of a substrate through conformal contact. Microfluidics is a method to manipulate small volumes of fluid in microchannels formed by sealing a PDMS stamp against a substrate. Both of these techniques are useful tools to study the behaviour of cells in a controlled environment. The following examples highlight the capabilities of these techniques. 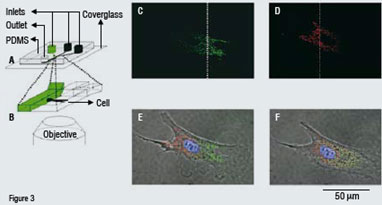 Figure 3: Partial treatment of a bovine capillary endothelial cellPartial treatment of a cell (bovine capillary endothelial cell) with two different fluorescent dyes using a microfluidic channel (c-e). Fluorescent microscope images show that the mitochondria on the left half of the cell are stained red and those on the right half are stained green through the use of laminar flow (the nucleus is stained blue). The dotted line denotes the interface between the two adjacent streams in the microchannel (f). After two and half hours, the subpopulations of dyed mitochondria are intermixed.

Microcontact printing can pattern a surface chemically with "bioselective" molecules amongst a background of "bioinert" molecules. Certain proteins (e.g. fibronectin) selectively bind to the bioselective regions and cells, in turn, bind to the proteins. Microcontact printing, therefore, is a method to pattern cells into arbitrary shapes, sizes and distributions on a surface. Figure 2 shows an example that demonstrates the utility of this technique. Microcontact printing generates arrays of fibronectin-coated squares of different sizes and spacing on a surface. This study showed that cells ceased to proliferate when their total projected area of attachment was below a threshold value. The ability to pattern cells allows for a dense array of cells to be organised on a surface for assays and has implications in the study of cell signalling and cytoskeletal behaviour.

Recently another use of microcontact printing has been demonstrated by patterning parallel lines of protein to seed the alignment of cardiac myocytes. When placed on a thin film of PDMS, the synchronised and spontaneous contraction of the myocytes causes the PDMS to curl with a synchronised rhythm (the contractions could also be paced externally). This cell-PDMS composite system is biomimetic and thus has implications as a model system to study cardiovascular diseases and therapeutics.

A small voltage pulse applied to the surface provides a method to release cells patterned on a surface by microcontact printing. The pulse, which does not harm the cells, releases the molecules from the surface, thereby freeing the cells. These methods provide the basis for cell motility assays.

Microfluidics is an effective method to control the microenvironment surrounding a cell. Fluids injected into a microchannel placed directly over a cell can deliver nutrients and stimulants to the cell in a controlled manner. Because the flow in a microchannel is laminar (i.e. non-turbulent), two adjacent streams in the channel will mix only by diffusion slowly. This behaviour can be harnessed to expose a cell to two distinct fluids at the same time, as shown in Figure 4. This technique is useful for studying cell dynamics, chemotaxis, cell polarity, spatially regulated signalling, drug screening, and other subcellular processes and possibly also to expose part of a cell to a drug and monitor the reaction of the sub-cellular components.

We have recently shown that microfluidic channels can be used to immobilise live worms (C. Elegans). Worms are a model system for organismic studies because of their simplicity. Immobilising worms for morphological analysis, fluorescence imaging, and laser microsurgery requires drugging the worm or gluing it to a surface. We have shown that live worms can be immobilised in a minimally invasive, reversible manner by flowing them into narrowing microfluidic channels. The worms become pinned in the channels, at which point they can be studied, and then reversibly released using mild pressure. This approach is well-suited for the testing of drugs and the incorporation of other forms of external stimuli such as heat, mechanical stress, electrical stimulation and oxygen depletion.

We have begun efforts to develop exceedingly inexpensive diagnostic devices made out of paper. This work involves fabricating the microfluidic channels in paper to distribute a single sample of fluid (by capillary action) into separate regions of paper for running multiple bioassays simultaneously (Figure 4). These paper-based microfluidic devices can serve as delivery systems in assays to detect metabolites, small molecule pollutants, proteins, antibodies and possibly DNA, and should be useful for detecting disease in humans, livestock and plants. Paper has been chosen as a substrate because it is inexpensive, light-weight, disposable and easy to use / carry. Paper based assays require no external equipment, reagents or power sources. These types of assays are believed to be useful in less-industrialised countries, but may also find use in domestic healthcare or emergency response settings.

The channels in the paper (Figure 4) are defined by soaking the paper in a photosensitive polymer. Regions of the polymer exposed to light become insoluble and the unexposed regions are dissolved away. The paper serves as a wicking medium and the hydrophobic polymer defines the edges of the channels. As a proof of principle, the detection of glucose and proteins in artificial urine has been demonstrated using colorimetric assays (Figure 4). 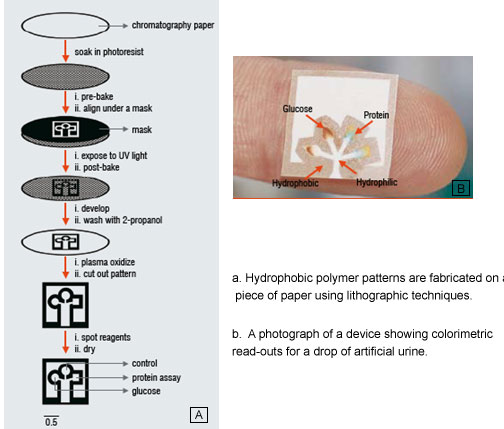 Nanoskiving is a nanofabrication technique that utilises an ultramicrotome (a tool featuring a knife capable of sectioning slabs as thin as 30 nm) to form nanostructures by sectioning thin-films embedded in polymer. Figure 5 is a schematic depiction of the nanoskiving process. A thin metallic film is embedded in a polymer matrix and sectioned with a microtome. In principle, the technique is only limited to materials that can be sectioned and deposited as a thin film (there are numerous techniques to deposit thin films, such as spin-coating and physical vapour deposition).

Nanoskiving is appealing because it is: i) simple, ii) inexpensive (it does not require the use of expensive conventional fabrication equipment or clean-rooms), iii) versatile (it can fabricate structures of various composition and geometry, including arrays of nanostructures), and iv) high-fidelity (it reproduces the same features with each section). The nanostructures formed by nanoskiving are embedded in a thin slab of polymer which can be macroscopically positioned on various substrates. 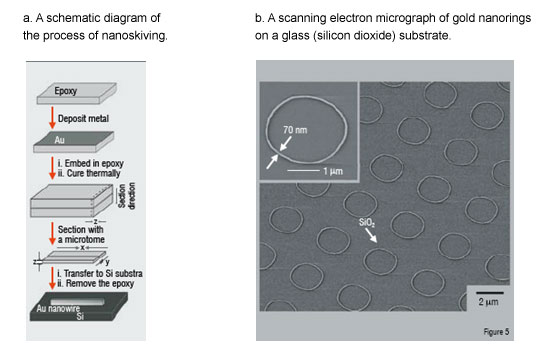 Soft lithography is a mature technology that continues to be used as a tool to study cell behaviour under controlled conditions. Patterned paper is relatively a new area that has great potential to be used for healthcare assays in less industrialised countries. Nanoskiving is a new method for forming nanostructures that could serve as sensors to probe living cells. The primary advantages of these unconventional fabrication techniques compared to conventional lithographic techniques are their simplicity and accessibility to researchers in biomedicine and their low cost. We believe that the components and devices produced by these fabrication techniques will be of great use to researchers and will find industrial applications-particularly in cellular assays-as the technologies mature.

Michael D Dickey is currently a postdoctoral fellow in the Whitesides Group. He will be starting his own research group at N.C. State University in the Department of Chemical and Biomolecular Engineering this fall. His research interests include unconventional nanofabrication, micro and nanotechnology and materials science. 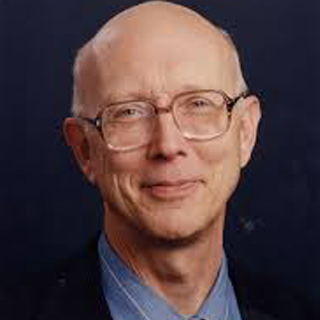