The Global Biosimilars Market is estimated to reach US$240 billion by 2030, with the Indian market at US$35 billion. The considerable increase in reference products, with the USFDA adding 90 molecules and India approving 70 biosimilars, promises to usher in further growth. The Biopharma industry seems keen on investing in the biosimilar market with a focus on improving healthcare and health care costs for diseases of interest like COVID-19, cancer, immunologic diseases, and diabetes. This is evident in the projected growth of the oncology biosimilar market at 17 per cent CAGR, and the growing demand and importance of monoclonal antibodies such as tocilizumab, sarilumab, and itolizumab for testing on COVID-19 patients. Patent expiry for certain biologics like Levemir, Avastin, and Humira have also helped drive growth. Another factor for increased popularity is that the Indian population is cost-sensitive, with domestic sales at nearly US$250 million. Export to other emerging markets is another vital aspect, estimated at US$51 million. Our expert Dr Ayaaz Hussain Khan details key trends that will drive growth in the biosimilar and biologics market across the globe.

The first Biosimilar was approved in the year 2006 in the European Union, and since then, there have been more than 700 biosimilar drugs that have been approved. Not surprisingly, there has been phenomenal growth in the biosimilars market; an Assocham report states that the global biosimilars market is estimated to reach US$240 billion by 2030, while the Indian biosimilar market is expected to reach US$35 billion. According to the U.S Food and Drug Agency (FDA), biosimilars are approved as they are found to be identical to a referenced approved product with no clinical difference when compared to the biological product. 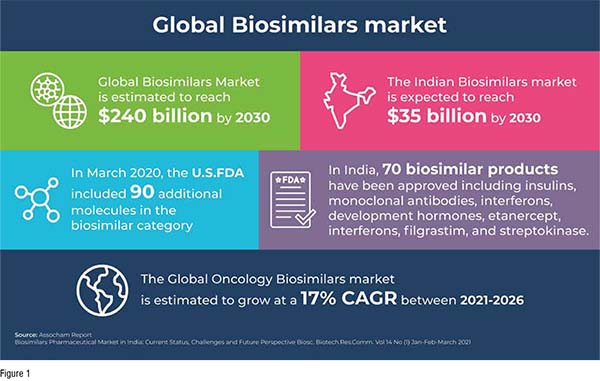 The meteoric rise of the biosimilar market

A systematic literature review conducted on over 90 studies showed that there were no great differences in immunogenicity, safety, or efficacy in biosimilars when compared with biologics. This has been an important factor for the growth of the biosimilar market, with the future of this sector looking right.

The key growth drivers and trends in the Biologics and biosimilar market include:

Largest market share in europe: In terms of revenue, Europe has the largest market share as it has a well-defined regulatory framework that large pharmaceuticals use to get their products into the market. Other reasons for continued growth include a good health care system and multiple product launches. As a pioneer in the biosimilar regulatory landscape, Europe continues to play a significant role, with 60 biosimilars that have been approved. The European Medicines Agency put forward stringent rules which need to be adhered to by biosimilars manufacturers for evaluation and approval.

India shows promise in numbers: In India, the number of biosimilar products that have been approved has reached 70, including insulins, monoclonal antibodies, interferons, development hormones, etanercept, interferons, filgrastim, and streptokinase. Greater clarity on the general uptake of biosimilars is evident in the fact that, with an onus on therapy for common diseases like cancer, immunological disorders, and diabetes, there are more than 60 biosimilars that are currently being developed.

2) Therapy for prevalent or chronic diseases: According to the World Health Organization (WHO), globally, noncommunicable diseases (NCDs), like cancer, heart disease, diabetes and chronic lung disease result in 70 per cent of death. A significant proportion of the affected live in low- or middle-income countries, with likely lower ability to afford expensive biologics.

There has been renewed interest in biosimilars with the use of monoclonal antibodies as therapy for COVID-19. Biosimilars for cancer too have been rising  in popularity, confirmed by projected estimates provided by Businesswire that the global oncology biosimilars market will grow at a 17 per cent CAGR between 2021-2026.

The demand for biosimilars is higher in the Indian domestic market for remedial action and for the treatment of chronic conditions like kidney ailments, rheumatoid pain, cardiovascular disease, cancer, inadequacy in developmental hormone and in haematological maladies.

Key Expertise Drives Partnerships: The lower cost of clinical trials, the deep scientific expertise and a large number of people with chronic illness have brought in renowned global pharmaceutical firms to partner with experienced clinical research organisations to test the efficacy of biosimilars and generics. A global pharmaceutical company required a well-known clinical research organisation to test the safety and efficacy of an anti-parasitic drug against COVID-19. 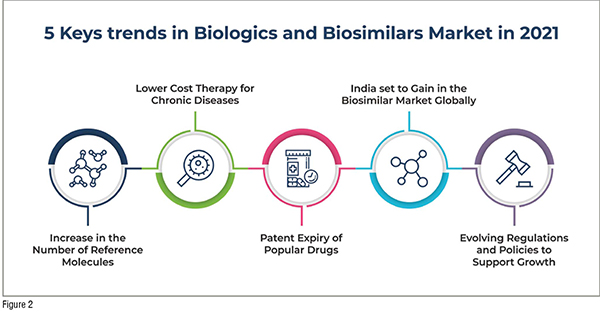 3) Embracing continuous innovation on patent expiry of popular drugs: There are nearly 17 drugs that will be coming off patent between 2020 and 2026, according to predictions. There has been considerable interest in developing biosimilars for leading biologics like Levemir, Humira and Avastin as their patents expired recently.

The crux in developing biosimilars that meet patient needs is to develop them using the most efficient systems so that they reach the market quickly. The key to maintaining a successful biosimilar in the market is to ensure that viable systems and innovative methods are adopted to bring multiple biosimilars into the market, for improved reach and sustainability.

4) India as a significant player in the biosimilar market globally: Biosimilars enjoy long term growth in the developed markets like Japan, Europe and the United States, as patients can afford the same. The main impediments in such markets are the acceptance from doctors, with respect to safety and efficacy, with stringency in regulatory compliance. However, the main impediment for faster adoption in emerging markets is the inability of patients to pay for the biosimilars. The expertise and resources required to manage biosimilar clinical trials results in the cost of biosimilars being just 10 per cent lower than biologicals.

The cost of the biosimilars, therefore, is a big driving factor, at least in the emerging markets. This same cost sensitivity has been the biggest factor for driving growth of the biosimilar market in India. The lower cost in conducting clinical trials in India, the significant number of USFDA approved manufacturing plants present out of US, and the presence of highly skilled and knowledgeable scientists provide the ideal backdrop for developing biosimilars. Cost efficient clinical trials will help in lowering costs of biosimilars. Further, the regulations put forward by EMA and WHO are the biosimilar guidelines of India.

5) Evolving regulations and policies driving growth: Each country’s central governing body is responsible for approvals and indications of new biologics. Every country can also specify the price, utilisation as well as the interchangeability of biologics with biosimilars. There has been a mixed level of penetration of biosimilars In Europe where the markets are developed. The improved acceptance is largely due to better awareness among the doctors and the pharmacists, incentives, policies, and the varied distribution channels. The penetration level, however, varies from one country to another, even with Europe. There is increased penetration of biosimilars in countries like Poland, Finland and Denmark, when compared with UK, Germany and France.

In the US better financing has played an important role in driving interest towards biosimilars, with Medicare advantage plans updated to determine the most cost-effective treatment measure. Till date, biosimilars are provided via the physician’s office, but this is expected to change by 2023, when certain biosimilars, like for adalimumab, are expected to be available through retail pharmacy. Such changes will also help in driving growth in this sector.

Overcoming the intricacies in the production of biosimilars: The living system or genetics play a key role in the development of biosimilars, affecting the safety and efficacy. Relatively small changes in the process of drug development or in the formulation of the drug product could result in significant changes to the therapeutic molecule, when compared with generics. This has resulted in greater hesitancy by physicians to utilise the drugs unless there are conclusive studies determining efficacy. Biosimilars are more expensive to develop when compared with generics, as the process of development is complex. It involves copying of the original structure of the biologics, and the need for capabilities like immunogenicity testing. Addressing such aspects will help in ensuring improved growth.

Clinical trial efficiency to be firstto-market: As many biologicals get off patents and with the collective need to lower burden of disease, there are multiple biosimilars that are expected to be launched.

However, the early market entrants are the biosimilars that will be most successful. According to a McKinsey report, the cost for developing biosimilars is between 100 to 300$, with clinical trials resulting in half of the costs. The adoption of agile methods and the ability to scale up resources at the right time will help in better managing trials. The regulators too have been bringing in regulations to better support the existing systems. For example, the need for immunogenicity trials was waived under certain conditions by the EMA in 2015, while the FDA brought forth similar conditions in 2019. Strategic partnerships will help improve the pace of biosimilar development aided by the right technological capabilities.

Vital insights for clinical trial success: The determining factor for growth in the biosimilar industry is lowering the time to market using innovative and commercially viable models. Agile companies that can rapidly evolve to changing needs and regulations while adopting data platforms and analytics will become strategic partners. Clinical trial complexity can be better managed with the near-real-time data insights gained from artificial intelligence tools as they can be used to take proactive corrective action to resolve critical clinical trial issues at the onset. Such key inputs help in the intelligent deployment of resources which can save time and money.

There are various factors that drive the growth of the biosimilar market like the need to reduce health care costs and to reduce the burden of disease. This is a dynamic sector which has witnessed rapid growth while ensuring a great impact on the health systems. With a large set of biologicals coming off patent and with expected changes to the market and regulatory structure, there is a surge in momentum that is expected. Deep channel analytics and iterative processes will help in strengthening this growing trend, and in transforming human health. 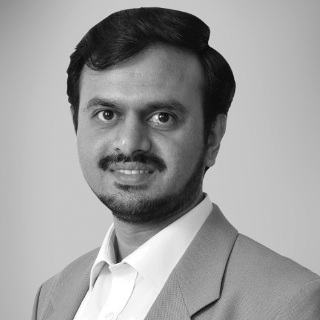 Ayaaz Hussain Khan is an authority in BA/BE domain of generic drug industry. He brings with him a rich experience of conducting over 1000 Bioavailability/Bioequivalence studies. He has been a gold medallist in his academics and completed his M. Pharm in Pharmaceutics from Birla Institute of Technology & Science, Ranchi. He further pursued and earned PhD in Pharmaceutical Medicine with specialization in Clinical Pharmacokinetics from Jamia Hamdard University, New Delhi.