Is Blockchain the Right Technology for the Pharma Supply Chain?

The pharmaceutical supply chain and blockchain technology are an uncomfortable match in today's environment. Blockchain technology has not yet evolved to meet the manifold demands of the pharmaceutical industry and its many regulatory bodies. Perhaps just as crucially, the many and diverse stakeholders within the pharma supply chain have yet to converge on common standards by which an integrated blockchain solution could be achieved. That said, the future looks bright, with several US-based matchmaker pilot initiatives, backed by influential stakeholders. Grant Thornton believes that we're approaching a positive inflection point for this promising and innovative way to address the complex business problems of the pharma supply chain.

Starting with the pharma supply chain, some of the foundational challenges include product diversion, counterfeits, recall efficiency, inventory control, cold chain tracking, and healthcare record interoperability. Of these challenges, perhaps the most pressing was driven by the U.S. FDA’s regulation for a secure supply chain, passed in November of 2013, called the Drug Supply Chain Security Act (DSCSA).The DSCSA called for ten-year, phased compliance, culminating in full unit-level traceability by 2023. At the time of its passage, the industry lacked any technology solution to feasibly meet the DSCSA, which is perhaps what initially drove serious consideration of a blockchain-based solution.

Why blockchain? At a fundamental level, blockchain solutions are transactional systems that allow for the tracking and/or transfer of assets, the recording of payments, and/or the memorialisation of interactions among participants who require secure, trusted, and transparent record keeping. Consensus among blockchain participants establishes the mechanism by which transactions are verified and synchronised. Given that blockchain technology is well suited for the secure and immutable memorialisation of transactions among diverse participants, the implications for efficiency and security within pharma a anifold:

Trusted: Every product hand-off between trading partners is documented in a trusted record, and the trust is derived from (and enforced by) the consensus of the participants.

Distributed: Perfect copies of the transactional detail are replicated across distributed nodes, creating system resilience and mitigating against the risk of hacking, fraud, and/or sabotage.

Auditable: No transactional record of trading partners can be edited or deleted; such recordings are immutable, creating an unimpeachable audit trail.

Transparent: A blockchain solution could be designed so that all trading partners can see where a tracked asset is, from whence it came, and who interacted with it along the way.

Disintermediated: No one entity, or intermediary, has control over individuated transactions in particular or the system in general, thereby reducing maintenance costs and increasing trust – for both participants and reviewers, auditors, and regulators. 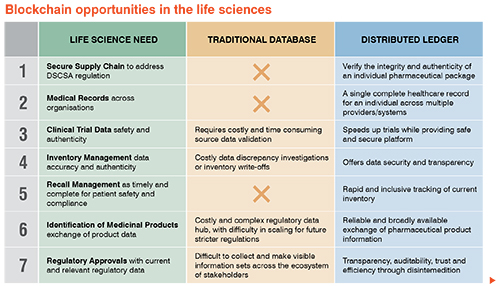 The life science industry certainly has noticed increasing hype around blockchain. The Pistoia Alliance1, a global not-for-profit group, surveyed 120 life science leaders in June 2016 and found that 83 percent anticipated adopting blockchain by 2021, with nearly one quarter (22 percent) responding that they were already using or experimenting with blockchain. The biggest opportunities identified were in the areas of supply chain and medical records; regulatory issues were expected to be the biggest hurdle. Since 2016, enthusiasm for blockchain has grown rapidly. The industry envisions many opportunities for blockchain in the broader view of supply chain (as depicted below):

Participants within the pharmaceutical supply chain are developing models and use cases to meet the requirements of the DSCSA. Most recently, in June of 2019 FDA invited Merck, Walmart, IBM and KPMG to start a new pilot project using blockchain to meet the DCSCA. Similarly, in 2017, 50 healthcare supply chain stakeholders worked with the non-profit Center for Supply Chain Studies to build blockchain reference models; more detail on this initiative can be found here. These reference models simulate product and data flows that are designed to satisfy the DSCSA regulation. Building upon the reference models, six study teams then conducted their own proof-of-concept implementations. The stated goals of these six studies went well beyond DCSCA compliance; the aim was to create operational efficiencies and to develop funding models for blockchain architectures.

In that same year, the blockchain technology company Chronicled brought together a representative group of pharmaceutical manufacturers and distributors to explore how blockchain could improve the supply chain and support track-and-trace efforts. The group named this blockchain project “MediLedger”, providing valuable insights such as how to protect data privacy and how to implement a saleable returns solution. This project continues to track products through the entire supply chain; more detail on this project can be found.

In Europe, the Innovative Medicines Initiative (IM2I) has started a health blockchain project targeting four areas in healthcare, one of which is the supply chain. The IMI’s Blockchain Enabled Healthcare program includes nine big pharma companies with a consortium of other stakeholders. This €18 million program is just underway on what is expected to be a three-year program.

The trial implementations referenced above are building functional architectures. Each implementation experimented with balancing the challenges intrinsic to blockchain – namely, speed, cost, privacy, proof of work, centralised control, processor demands, and governance. Beyond these proof-of-concept projects, blockchain innovations continue. For example, a concept known as “Proof of Stake” has been implemented for cryptocurrency networks to validate transactions more efficiently, thereby reducing required processing power. Another innovation is “sharding”, a streamlined way of verifying transactions by processing components of a transaction via parallel nodes. As we are seeing multiple blockchain solutions independently evolve, each with their own unique strengths and weaknesses, some interoperability players are emerging that allow for interplay among various blockchain solutions. The interoperability could allow the pharma supply chain to leverage different blockchains for different functional value, potentially providing “best of all worlds” in terms of the strengths of each blockchain.

But all of these cutting-edge innovations are stymied by perhaps the greatest challenge to widespread blockchain adoption–standardisation or, more accurately, the absence of standards. Even the most elegant of designs will fail if the pharma community fails to adopt it. The endgame is to move the whole industry toward a common approach, and standards plus adoption are the keys to that endgame. Because data and products move among trading partners in a complex and interconnected web, it may be unrealistic to expect trading partners to participate in multiple blockchain solutions. As the move to Identification of Medicinal Products (IDMP) has demonstrated, alignment on standards is a slow-moving process, but it is nonetheless the right course for this industry.

The evidence for the importance of this alignment abounds in precedents from other industries. In the 1970s, the grocery industry recognised the need for greater efficiency in its check-out lines. Around the same time, IBM introduced a means of storing data within a symbol comprised of black and white lines – the bar code. These symbols could be scanned via computer to capture robust sets of data instantly. By 1974, Wrigley’s gum became the first product to be marked with the UPC barcode. Today, UPC barcodes are ubiquitous in grocery stores because this single UPC barcode standard allows trading partners to exchange trustworthy and standardised data with ease and immediacy.

While the barcode is a standard identifier in many industries, the adoption of the barcode for medical devices only recently gathered momentum. This slow adoption rate relates not to challenges intrinsic to the underlying technology but to the length of time it took the healthcare community to coalesce around a single, global data standard (GS1). The same is true for the adoption of blockchain for pharma. It is not the technology advancement that will be the slowest to develop, it will be the coalescence of the industry around a standard blockchain architecture.

In the short-term, we will see the implementation of a variety of blockchain approaches to address the current needs of the pharma supply chain, but that variety introduces complexity as a barrier to adoption. The inefficiencies in this industry are pronounced, the pace of blockchain evolution is rapid, and the demand for solutions is strong. Accordingly, the pharma industry would be well served to work toward standardisation. Blockchain adoption in pharma is a matter of when not if. That said, without standardisation, blockchain cannot realise broad adoption, much less its potential as a disruptive force in pharma and across all of life science.

Standardisation is difficult to achieve, if the blockchain stakeholders cannot align. The users, business, core developers, miners, and node operators need to collaborate to form an effective off-chain governance community. Unfortunately, governance is yet another blockchain hurdle proving difficult to overcome in pharma. In fact, alignment even within the domain of “users” is challenging, since the concept of “users” incorporates very diverse supply chain participants, including manufacturers, wholesalers, distributors, and pharmacies. Similarly, on-chain governance is taking a long time to realise. In other arenas, blockchain technical design decisions are made by core developers (and ultimately by token-holders and/or participants), but the inability to unify disparate supply chain participants “off chain” makes it profoundly challenging to identify – much less unify – on the standards and practices that comprise effective on-chain governance. However, we should not conclude that pharma as an industry is a dysfunctional family of stakeholders. All industries struggle with establishing a blockchain governance model. Arguably, the most successful model to date is Bitcoin, and that model continues to evolve – even ten years after its inception.

The final major hurdle for establishing a supply chain blockchain is funding. Which stakeholder, or stakeholders, will assume responsibility for paying for the blockchain. The industry has not yet developed the model for sharing the cost even though all stakeholders are likely to benefit. Some stakeholders stand to benefit more than others, but to what degree depends on the blockchain design. For example, distributors are excited about the benefits gained to their inventory management processes, but the benefits would be tempered if they lose competitive advantages across distributors within the new visibility of upstream data flow. Another visibility concern is that of the end patient. If the patient can access a long, complicated – but safe and secure – chain of custody, will it impact customer satisfaction, or their compliance with the doctor’s orders? So the willingness to fund the blockchain will depend on the design of the roles and privileges of stakeholders to address transparency concerns of all stakeholders.

We expect to see Drug Traceability blockchain move from pilot and narrow-scope application to broader, national solutions in response to regulations such as the DSCSA. Globally, no formal harmonisation effort has yet materialised, but we expect this to change as the technology, governance, drive for change, and funding evolve.

Given the increase in collaboration among pharma participants, the increase in data traceability that blockchain promises, and the compliance mandates such as the DSCSA, we envision the next year will bring significant developments that leverage blockchain technologies in the value chain. In turn, we believe the scalability and acceptance of these developments will increase the quality, safety, and the efficient delivery of care globally. Blockchain is a viable solution that is still several years away to prove out for significant investment and adoption. That said, it has all the making to be a game changer. 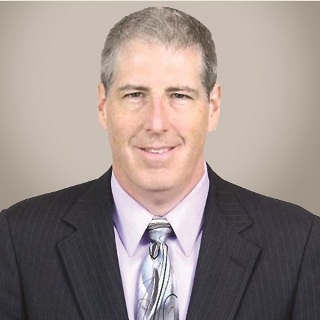 Bradley Pedrow is a regulatory professional serving clients within Grant Thornton’s Life Science Industry Practice. He has successfully led regulatory compliance and efficiency initiatives with global medical device and pharmaceutical manufacturers. With more than 25 years of life science experience, he has served stakeholders across the value chain.