Increasing competition in the oncology space is heightening the importance of marketing competence and impacting decisions made long before a product enters the market. Assuming proven favourable efficacy and toxicity across a number of potential areas, choosing the right point of entry for a molecule is critical, given that some indications will be shared with competitors sooner rather than later. To command and sustain a premium price, companies must not only consider where they will launch and the sequence of successive launches, but also how their products will be clearly differentiated from potentially competing products.

The more prevalent cancers such as breast, lung, bowel and stomach in major markets of North America and Europe, where patient populations are large and lucrative, clinical trial infrastructure is well-established, and development partnerships can be fostered with relative ease are certainly tempting. But what about starting in a small, low-visibility pocket—one that nonetheless offers tremendous opportunity—getting established in that niche, and then branching out into other areas from there? Recent developments in the treatment for primary liver cancer may provide some interesting pointers—particularly in the Asian market where morbidity and ethnic characteristics demand evaluation and offer opportunities in the oncology arena—not with standing access issues that may require a novel commercial strategy.

Primary liver cancer, or primary Hepatocellular carcinoma (HCC), is the 13th most common cancer and the ninth leading cause of death in the developed markets of North America and Western Europe. However, in the underdeveloped regions, such as East and South-East Asia it is the third most common tumour and the second leading cause of death. Treatment for liver cancer is dependent on several factors including age, type and size of the tumor, and whether the cancer has spread beyond the liver. The prognosis for advanced conditions is poor and overall two-year survival for all HCC patients is less than 10 percent.

Drug therapy for HCC is fragmented from country to country, as well as by the lack of a widely supported or well-established treatment pattern. Variations in treatment patterns are apparent in the five major European Union markets (France, Germany, Italy, Spain and the U.K.), the U.S., Japan and China and even within each region. Japan is specifically affected by a significant lag in the launch of newer therapies compared to other major markets, mainly because the Japanese regulatory authorities still have to evaluate and approve many innovative therapies that are already available elsewhere.

Despite the modest worldwide incidence—560,000 cases per year worldwide, well behind the million-plus new cases of breast or lung cancer—and its historically uncharismatic therapeutic portfolio, liver cancer management has recently received a boost with the emergence of a few novel agents, most notably sorafenib (Nexavar®, Bayer/Onyx). 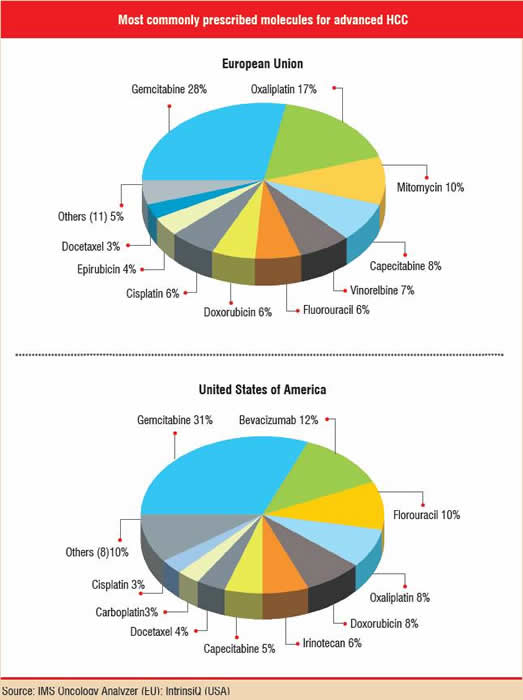 Sorafenib is a multikinase inhibitor, already approved as first line (i.e., the first type of therapy used) in advanced renal cell carcinoma, which decreases both angiogenesis and tumour cell proliferation, blocking tumour growth. In a phase III trial of 600 previously untreated patients with primary HCC randomised to placebo or to sorafenib, patients treated with sorafenib demonstrated a 44 percent improvement in overall survival, and nearly doubled the median time to progression compared to the control group. This finding was more than significant to merit closing the trial early, declaring success for sorafenib, and switching patients initially randomised to placebo over to receiving sorafenib. Well-tolerated and easy to administer as a twice-daily pill, sorafenib is the first agent shown to demonstrate a statistically significant improvement in overall survival for patients with advanced HCC. Studies are going on in Japan, Taiwan, Europe and the U.S.

Sorafenib is also being evaluated in clinical trials by its developers, international study groups, government agencies and / or individual investigators as a single agent or combination treatment in kidney cancer (potentially in the adjuvant setting), metastatic melanoma, breast cancer and Non-small Cell Lung Cancer (NSCLC). The Phase III Evaluation of Sorafenib, Carboplatin, and Paclitaxel Efficacy (ESCAPE) in a NSCLC trial recently completed enrollment of more than 900 patients previously untreated with NSCLC.

New standard for HCC or not, can sorafenib change the profile of liver cancer? To do so, it would have to change treatment algorithms in East Asia, a less-familiar market than the U.S., Europe, and Japan but the market featuring the greatest unmet need for HCC. IMS Oncology Analyzer data shows the frequency of primary HCC in Shanghai to be 35 in 100,000 men—compared with only approximately 9 per 100,000 men in the U.S. About three-quarters of all cases of liver cancer worldwide are found in East Asia where up to 50 percent of diagnosed cancers are HCCs.

A wealth of opportunity is conceivable in this region. More than half of the Chinese healthcare spending is devoted to drugs (versus 10 percent in the U.S.), indicating that current obstacles for drug purchasing and distribution are not insurmountable. Western-style state-of-the-art medical facilities that would be suited to distributing sorafenib are present in China, albeit in a limited number of wealthy districts. And again, the fragmentation of the East Asian market is an opportunity for sorafenib; with no one drug therapy boasting enough market dominance to ward off opportunistic newcomers.

The challenges to sorafenib’s ability to penetrate this market, however, revolve around issues like market access, awareness and affordability as much as medical merit. These challenges stem in large part from the current state of China’s healthcare system. In an effort at reform in the 1980s, China’s healthcare system transitioned from high government control to a largely decentralised system soon characterised by privatisation and increasing drug costs, and by tremendous disparities between urban and rural healthcare—being considerably inferior in the rural communities with large population. 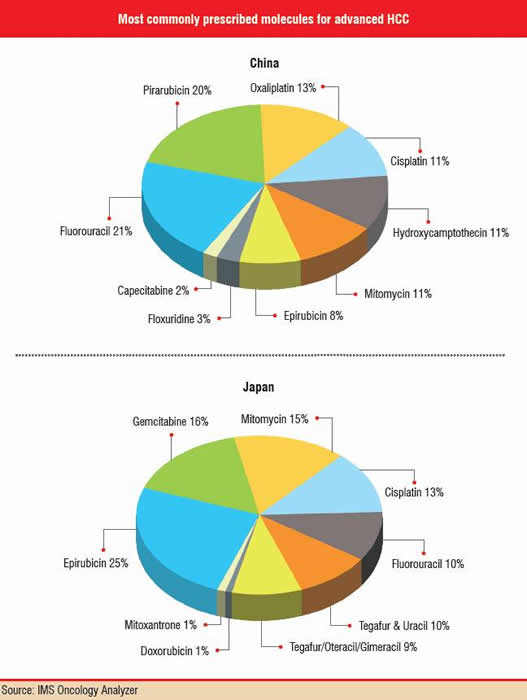 This level of inequality in access is an important issue and presents a legitimate challenge for sorafenib in East Asia that could potentially place the drug out of range, financially and logistically, for the majority of Chinese HCC patients. Just 29 percent of Chinese have health insurance; only 7 percent or fewer of rural Chinese, specifically, had health insurance (as compared with 49 percent of urban Chinese) when surveyed in a 1999 study. A 2001 survey found that half of the people surveyed said that they had foregone healthcare because of cost considerations.

To counter this, one consideration could be differential pricing. The same drug often has a different price in France than in Germany, for example; could sorafenib be priced low in rural areas in order to maximise uptake, and high in the wealthy urban districts to compensate? Conventional wisdom suggests no; drug purchasers, whether physicians or patients, would be likely to pursue parallel trading, travelling to the bargain-districts to purchase the drug. This “bargain hunter” scenario is already being witnessed in the U.S., for instance, where patients travel to Canada to purchase lower-priced versions of branded drugs. Furthermore, rural areas in China outnumber wealthy areas to the extent that differential pricing would likely be a funding challenge in even the wealthy regions.
An alternative approach would be to work with Chinese manufacturers and distributors to control the delivery costs of sorafenib, enabling a lower price-point without narrowing profit margins. Or, accept a lower pricing model for East Asia than would have been acceptable in the U.S., justifying short-term loss in sales in order to become established and lay the groundwork for indications beyond liver cancer—conducting clinical trial costs an estimated 30 percent less in China compared to the United States or Europe. With drug development programmes in the U.S. and Europe costing in the region of US$ 800 million, 30 percent savings could be put towards researching, marketing, and distributing sorafenib for additional disease niches.

Competition in the wings

Any strategy would also need to acknowledge that sorafenib would not be alone. Pfizer’s competing oral multikinase inhibitor, sunitinib (Sutent®), is in phase II trials for HCC. The fact that sunitinib’s current trial locations include Taiwan implies that powerhouse Pfizer also plans to target the East Asia market should sunitinib meet its trial endpoints, and be submitted and approved for HCC.

Sunitinib and sorafenib each have demonstrated similar efficacy in renal cancer (both drugs’ lead indication) and liver-cancer clinical trials. They, are easy-to-administer oral agents and have the backing of significant financial resources. The best option for securing sorafenib’s leadership in HCC, then, may be through a savvy cost-effective approach through as much clinical due diligence as possible. Virtually every market in the world is exploring the value of health economic data when developing reimbursement guidelines and approving drug formularies. Taking the proactive step of supplying East Asia’s drug policymakers with cost-effective models of liver cancer treated with sorafenib, compared to wasted treatments, comorbidity and death without it, would give tremendous weight to sorafenib’s place in this market—quickly and without the expense of a major clinical trial or, for that matter, a major advertising or physician education campaign.

Is liver cancer worth pursuing?

The answer, analytically speaking, is yes. As case studies of other recent launches have shown, size is not necessarily important when judging the financial attractiveness of an indication. Consider Novartis’ Gleevec/Glivec (imatinib) for Philadelphia chromosome-positive Chronic Myeloid Leukemia (CML). Though the prevalence of CML in the U.S. at the time of Gleevec’s U.S. launch was estimated at only approximately 20,000 people, in its first six months on the market Gleevec generated sales of more than US$ 150 million, and quickly went on to deliver blockbuster sales (exceeding US$ 2.5 billion in 2006). The caveat here is that unrestricted access and high price premiums are becoming increasingly elusive goals in all indications without clear demonstration of product value and meaningful improvement in survival and quality of life.

Ethnic diversity in the response to different treatments is also an important consideration within the context of return on investment for niche populations. Take as an example AstraZeneca’s Iressa (gefitinib) for NSCLC. Although a troubled post-launch history led to eventual withdrawal of Iressa’s European submission and to regulatory authorities in the U.S. and Canada limiting the use of Iressa to those patients already experiencing benefit from the drug, Iressa is accepted as an effective therapy for pre-treated advanced NSCLC in the Asia Pacific region (which may feature a different molecular profile for lung cancer) and is being evaluated in the first-line advanced setting.
And, long-distance relationships with East Asia have proven successful. Major manufacturers have been selling their products in China since the 1980s and several have built manufacturing plants in that country. In 2002, AstraZeneca set up the first Western-owned clinical research organisation in China. In 2003, Eli Lilly made a deal with a Chinese company to purify, synthesise and analyse compounds supplied by Lilly researchers. In 2004, Roche dedicated a new research and development lab in Shanghai that is focussed on medicinal chemistry.

With these examples to lend credence to drug commercialisation outside the U.S. and Europe, and on the basis of sorafenib’s efficacy and its relevance to the Chinese population, Bayer should have the confidence to make East Asia a very successful market for sorafenib.

If we can measure the future marketing of niche cancer products using the case studies of the recent past—and assuming evidence of demonstrable value—sorafenib’s entry into East Asia may well point towards mighty oak trees growing from the “little acorn” of liver cancer treatment in this region. 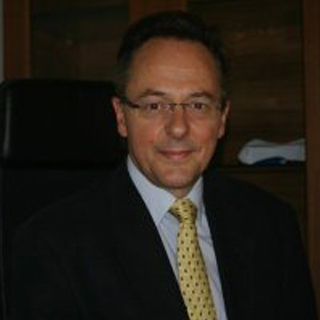