The Genotoxic Impurities (GIs) are carcinogenic and hence their management during synthesis of pharmaceuticals is very vital so as to be detected even in trace amounts for the safe use of the drugs. This editorial gives an account of updated information about GIs and reviews the regulatory aspects for GIs in active pharmaceutical ingredients/drug formulations.

As per ICH Q3A guidelines, ‘impurity in a drug substance is any component of the drug substance that is not the chemical entity defined as the drug substance’, and as per ICH Q3B guidelines, ‘impurity in any component of the drug product that is not the chemical entity defined as the drug substance or an excipient in the drug product’. Though none of the regulatory bodies gave clear definition about specific impurities so profiling can be termed as ‘the common name of analytical activities with aim of detection, identification and/or elucidation the structure and quantifying inorganic, organic or even solvent residues present in bulk drugs and pharmaceutical final products.’ In a very broad sense, ‘a molecule which is results of degradation of drug substance over a time such degradations are results of oxidation, deamination, proteolysis and many more chemical reactions which could be affect stability of drug product over a time and it should be quantify is called impurities’. Detailed classification of impurits shown in figure 1.R2), (C) ANDAs: Impurities in Drug Substances and (D) ANDAs: Impurities in Drug Products.n in figure 1.

In pharmaceutical products and APIs, genotoxic impurities are generally termed as substances that do not provide any therapeutic advantage, but may have the potential carcinogenic or mutagenic effect. Therefore, levels of impurities need to be in controlled a range that is safe for human consumption. Level of impurities may project a high impact on the safety, in-process time on development, and even the sales and marketing of the drugs. For example, the time required to develop drugs can be significantly increased when it is necessary to carry out multiple attempts to characterise and remove impurities to acceptable levels. According to ICH guidelines, impurities related to drug substances can be classified into three main categories: organic impurities, inorganic (elemental) impurities, and residual solvents.

From these categories, impurities that posses genotoxic effects have special attention due to a significant safety risk, even at low concentrations, because they may have mutagenic action on DNA which makes them potentially damaging to DNA and further processes. There have been many discussions about the definition of genotoxic impurity. But from the reference of ICH S2 (R1) Guideline1, genotoxicity is defined as “a broad term that refers to any deleterious change in the genetic material regardless of the mechanism by which the change is induced.” This definition is justified. It is also defined as an “impurity that has been demonstrated to be genotoxic in an appropriate genotoxicity test model, e.g., bacterial gene mutation (Ames) test”. Another term Potential Genotoxic Impurity (PGI) defined as an “Impurity that shows (a) structural alert(s) for genotoxicity but that has not been tested in an experimental test model”. Here potentially relating to genotoxicity, not to the presence or absence of this impurity. Different regulatory guidelines are discussed herewith in context to genotoxic impurities. 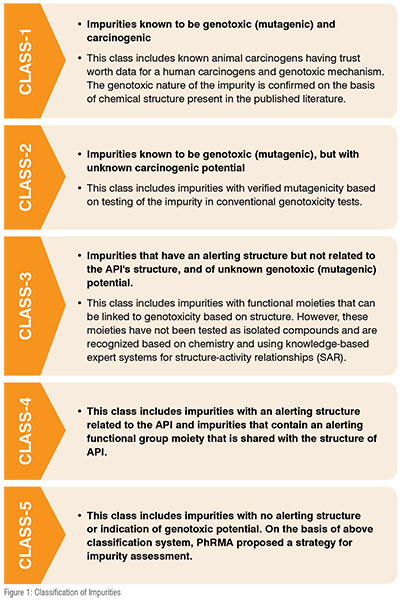 This set of guidance recommends that qualification studies of an impurity are appropriate after consideration of the patient population and extent of drug use. ICH Q3A(R2) indicates that “such studies can be conducted on the new drug substance containing impurities to be controlled, although studies using isolated impurities can sometimes be appropriate.” A similar recommendation is included in ICH Q3B(R2). The ICH guidance provides some recommendation on the types of tests that should be performed; however, it does not provide definite recommendations to proceed if one or both of the genetic toxicology tests are positive. It simply states that additional testing, removal of the impurity, or lowering level of the impurity should be considered. ICH Q3C(R3) endorses acceptable concentration limits for diverse classes of solvents. The guidance does not, however, include a recommendation on limiting exposure based upon concerns for genotoxic potential. As per recommendations, only mathematical models should be used for setting exposure limits in cases where reliable carcinogenicity data are available.

The ICH guidance on impurities and residual solvents do not apply to drug substances or drug products used during the clinical research stages of development. International Conference on Harmonisation Q3A15 controls impurities in new drug substances, with thresholds for reporting, identifying, and qualifying impurities. ICH Q3B16 is the equivalent guideline for impurities in new drugs. ICH Q3C17 controls residual solvents, and is the first time the ICH applied substance-specific limits. Depending on their forthcoming risk to human health, residual solvents are categorised into three classes. Class I solvents should be avoided, class II solvents have allowed daily exposure limits, and class III solvents have no health-based exposure limits if the daily exposure is 50 mg/day. ICH Q3D is presently under development and will consist of elements and limits for heavy metal impurities.

At this time, released ICH guidelines for impurity limits are not appropriate for most GIs. One issue related to GIs specifically is that the synthesis of drug substances often requires the use of reactive materials which have the capacity to interact with human DNA to cause mutations and cancer, even at extremely low levels. Thus, GIs should be avoided or at least reduced below a defined threshold potential.

The USFDA released the draft guidance to address the GI issues that speaks a diversity to characterise and reduced potential life time cancer risk connected with patient exposure to genotoxic or carcinogenic impurities. The Guidelines of impurity profiling in USFDA are mentioned below.

In June 2006, Europe, the Middle East and Africa's (EMEA) Committee for Medicinal Products for Human Use (CHMP) published a guideline on the limits of GIs in support of a marketing application. This guideline recommends split of GIs into those for which there is ‘sufficient (experimental) evidence for a threshold-related mechanism’ and those ‘without sufficient (experimental) evidence for a threshold-related mechanism.’ The former GIs would be addressed using methods summarised in ICH Q3C(R3) for class 2 solvents. This method calculates a ‘permitted daily exposure,’ which is derived using the ‘no observed effect level or lowest observed effect level’ from the most relevant animal study and incorporating a variety of uncertainty factors. For GIs without sufficient evidence for a threshold-related mechanism, the guideline proposes a policy of controlling levels to ‘as low as reasonably practicable’. It stipulates that every effort should be made to avoid the development of such impurities during drug substance synthesis and, if that is not possible, technical effort should be made post synthesis to reduce these impurities (e.g., purification steps). Compounds that fall into this category are those that interact with DNA either directly or indirectly, such as alkylating agents, intercalating agents, or agents that can generate free radicals. Since any exposure to these agents can express some level of carcinogenic risk, and since entire elimination of GIs from drug substances is often unattainable, the presence of a concerning impurity requires the implementation of a perception of an acceptable risk level. Methods of acceptable risk levels are discussed in ICH Q3C(R3), Appendix 3, in reference to class 1 carcinogenic solvents. The EMEA guideline recognises these limitations and, therefore, proposes ‘TTC’ for GIs. The EMEA guideline recommends a TTC of 1.5 µg/day for all potent compounds. The guideline indicates that a TTC value higher than 1.5 µg/day may be acceptable based on a weight-of-evidence approach to the profile of genotoxicity results, in circumstances where the anticipated human exposure will be short term, for the management of life-threatening conditions, when life expectancy is less than five years, or where the impurity is a identified substance and human exposure will be much greater from other sources.

From the review, it is quite obvious that identification and regulation of genotoxins in a synthetic process are challenging because of evolving nature and variable points of entry of GIs during complex aspect of drug development process. Hence, synthetic routes should be screened for the identification of structural elements that cause genotoxicity. The ICH M7 guidelines are currently being implemented throughout the pharmaceutical industry and international regulatory agencies because of the number of specific difficulties encountered with previous guidelines. Furthermore, an appropriate balance needs to be found that takes into account patient safety against the amount of time and resources to quickly get a pharmaceutical product to the market. 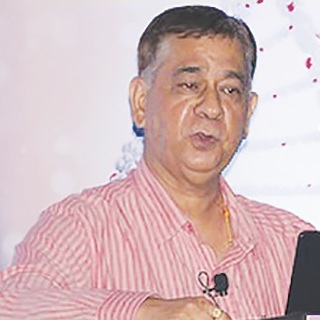 Ambikanandan Misra is currently Professor and UGS-BSR Faculty Fellow at Faculty of Pharmacy, The Maharaja Sayajirao University of Baroda, Vadodara. He has been associated with the field of pharmaceutical sciences for more than 39 years. 47 PhD and 136 Master students have completed their dissertation under his guidance. He has 7 books, 45 book chapters and 174 peer reviewed publications in reputed journals. He has filed 29 national and international patents out of which 9 have been granted so far.