Choosing the right shell excipient for your formulation challenges

This article outlines the key challenges facing soft and hard capsule formulation and focuses on the importance of choosing the right excipient to optimise the delivery of Active Pharmaceutical Ingredients (APIs). It also explains why gelatin is the excipient of choice for pharmaceutical manufacturers, and highlights the advantages and disadvantages of the latest alternatives developed.

As the pharmaceutical market expands and new technologies and actives are adopted, selecting the right excipient is essential to achieve optimum performance and functionality in pharmaceutical formulations and in particular in capsules, todays’ consumer preferred dosage form. The global markets for empty hard and soft capsules are expected to grow significantly and reach annual revenues of US$2.13 billion and US$755 million respectively by 2022.

According to FDA documentation, over the past five years, about 12 per cent of all US prescription based (Rx) and over-the-counter (OTC) pharmaceutical products were dosed with hard capsules. On the other hand, the popularity of soft gels shows no signs of slowing down, mainly due to their use in nutraceutical markets and added value in difficult Rxformulations, including very low dose APIs(<3 mg), potent compounds, hormones and cytotoxic compounds (safe handling), oxygen-labile APIs, and especially poorly soluble or poorly permeable APIs.

In the article that follows, the performance of different capsule shell excipients—the market leader gelatin; hydroxypropylmethyl cellulose (in short hypromellose, or HPMC) and pullulan for hard capsule manufacturing; and modified starch for soft capsule—will be reviewed in the context of the latest industry requirements, namely clean label, technical performance, operational effectiveness and safety.

Favoured for its high functional capabilities, gelatin has been used in both hard and soft capsules in the pharmaceutical and nutraceutical industries for over 100 years. The first capsules were manufactured with gelatin in 1834 and, for decades, it has been the safe and only choice. The first commercially feasible gelatin alternative entered the market in 2001, a soft gel shell alternative made of a blend of modified starches (hydroxypropyl starch) and carrageenans. Soon after, hard gelatin capsule alternatives were commercialized, using HPMC as the main shell ingredient. First generation HPMC used carrageenans or gellan gum, differently from the more recently commercialised second generation HPMC capsules that do not require a gelling aid.

The natural trend keeps gaining momentum and, originally associated with the food industry, it has expanded to capsule manufacturing, with the nutraceutical market leading the way. Innova Market Insights even considers it as the number one trend in 2017.Clean label is a non-regulated term, but is widely accepted as ‘containing recognisable ingredients’, the absence of artificial or chemical ingredients, and the addition of sustainable and naturally sourced ingredients. Surprisingly, people often mistakenly associate clean label with vegetarian origin, although products of plant origin could have been extensively chemically processed and lose their clean label status.

Of the excipients reviewed in this article, only gelatin meets the natural and clean label trend as outlined above. Gelatin is a recognisable and sustainable ingredient. Pullulan (and carrageen an used as gelling aid), are brought to market essentially undistinguishable from the form that is present in nature and therefore carry an e-number in the European Union (EU). HPMC for hard capsules, and modified starch for soft capsules, on the other and, undergo a heavy chemical process to produce capsules with a synthetic base. Obtained from felled and shredded trees (HPMC), or corn crops (modified starch) and partially etherified with methyl and/or propyl groups, these ingredients are classified as additives and aree-number labelled in the EU.

In capsule-dosed medicines formulated for immediate release, capsule opening time represents the most important parameter to evaluate effectiveness. With the exception of enteric capsules, the sooner the capsule opens in the stomach, the sooner the API becomes available for absorption by the body. The functional properties and dosing of excipients play a key role in dissolution time. With respect to hard shells, gelatin and pullulan capsules represent the best options and exhibit similar in vitro dissolutions profiles, when HPMC capsules show vendor-to vendor variability.

HPMC capsules can open unpredictably depending on the gelling aid used, with 50 per cent release ranging from 24 minutes to more than two hours, and should, therefore, be avoided to formulate pharmaceutical grade medicines, except if aiming to achieve gastro-resistance.

In a cross linking reaction, two or more molecules are joined by a covalent bond, resulting in an increase in molecular weight. Affecting the cross linked polymer’s solubility, cross linking might also have an impact on capsule opening time, and ultimately bioavailability. Proteins in general crosslink in the presence of certain aldehydes. Being a protein, gelatin is more likely to this phenomenon in contrast to the polysaccharides HPMC, pullulan and modified starches. However, high quality pharmaceutical excipients and active ingredients are free of aldehyde contaminations, which is why cross linking is usually not an issue with Rx and OTC gelatin capsules.

When oxygen-sensitive compounds are encapsulated into HPMC capsules, it is recommended to include an antioxidant in the fill formulation or to package the capsule product into an oxygen-resistant configuration, such as a blister package with aluminium foil. Soft gels offer the safest choice for formulating oxygen sensitive APIs because of the absence of ahead space.

Water vapour interplays differently with the capsule types examined. Pullulan is the most hygroscopic translating in an unwanted perceived tackiness when holding pullulan capsules for 30 seconds or more. HPMC capsule shells have a three-fold lower average moisture content than hard pullulan and gelatin capsule shells, and are therefore thought to be the logical choice to formulate moisture sensitive APIs. However, studies have been unsuccessful to demonstrate this proposed benefit.

While capsules offer manufacturing advantages over other dosage forms, there are still several factors to consider when determining operational effectiveness.

Considering the overall cost of manufacture, raw materials for first generation HPMC capsules cost approximately four times more than gelatin, while manufacturing costs are three times as much. In addition, supplying the raw materials for HPMC accounts for 50-60 per cent of the total production costs, while this is only 45-50 per cent in the case of gelatin hard capsule production. Atleast 40 per cent less raw material is required to manufacture a batch of hard gelatin capsules, as compared to production with HPMC.

In the highly regulated pharmaceutical industry, gelatin’s standardised production process remains a guarantee for high quality. Moreover, the gelatin production process does not fall under the European Commission Seveso Directive for the prevention and control of chemical plant accidents, unlike the manufacturing process of many other pharmaceutical ingredients, such as HPMC or modified starch.

The latest technologies and developments in the capsule industry have led to the introduction of new shell ingredients to the market. In the face of increasing demand for safe and clean label products, rising costs and the importance of operational effectiveness, sophisticated fill formulations and stringent regulatory pressures, gelatin offers a future-proof solution to meet these capsule challenges. 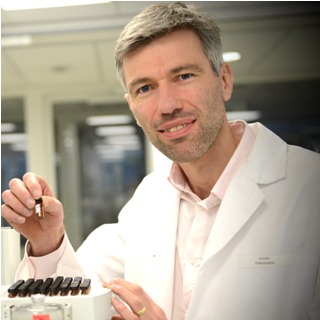 Bjorn Vergauwen is Principal Scientist at Rousselot. He currently coordinates R&D projects aimed at unlocking the unmet potential of gelatin. His main expertise relates to the biophysical and  biochemical principles underpinning gelatin’s behavior in food and pharma applications and to its use in pharmaceutical dosage forms. Dr. Vergauwen has a PhD in biochemistry from Ghent University, Belgium. Before joining Rousselot in 2014, he had several missions as Post-Doctoral Researcher at Ghent University where he conducted research in enzymology and structural biology for 17 years.