Principles of product stewardship have to be applied to make sure that from production through to use and disposal, along the entire supply and value chain, antibiotics are not just delivering positive direct benefits to patients but deliver positive benefits to society overall.

Tackling the challenge of supply chain security in the face of antibiotic resistance.

Every year, AMR is responsible for nearly 50,000 deaths in the US and EU alone. In India, annually nearly 60,000 babies die from sepsis caused by bacteria resistant to antibiotics. In 2012, there were about 450,000 new cases of Multidrug-Resistant Tuberculosis (MDR-TB) worldwide –just one disease that had been long considered easily treatable with modern medicines. Actual numbers are likely to be higher but only patchy data exists for many parts of the world. It is estimated that at the current pace and if no effective steps are taken, the annual death toll related to AMR will top 10 million people by 2050.

The direct economic burden of AMR runs in the tens of billions of Dollars each year, not considering indirect costs such as productivity losses.

Classified as one of the top threats to humanity by the World Health Organisation (WHO), antibiotic resistance is well known and is on the political agenda. In 2014, UK Prime Minister David Cameron held an inquiry into the issue; the Dutch government held a conference on antibiotic resistance in June 2014, inviting ministers and senior government officials from more than 20 countries to the debate, while in the United States, President Obama produced a report on combating AMR.

While AMR is part of the political debate, currently, the major focus of public efforts aims at the right prescription and use of antibiotics by doctors, pharmacists and patients. This is important! But there is another important element that must be addressed in the context of AMR: the manufacturing of antibiotic Active Pharmaceutical Ingredients (API) itself, as well as the management of waste and waste water which is an inevitable part, throughout the entire supply chain.

We work in an industry that, at its core, is not just socially beneficial but fundamental and essential to mankind.  Antibiotics save millions of lives every year and enable a range of essential medical procedures to be conducted safely. However, irresponsible behaviour of producers using outdated technologies to manufacture the APIs in combination with poorly managed waste streams, is leading to unnecessary and harmful disposal of antibiotic residues into the environment, contributing to AMR.

Thousands of tons of antibiotics are produced every year, both by compliant as well as non-compliant manufacturers. There are outstanding examples of compliant producers, but there are also numerous examples of factories that use insufficient waste management and treatment systems, and even dumping untreated waste water and antibiotics into the environment.

Such reports are concerning and it seems that the pharma industry is adding to the growing problem of AMR, while it should be a part of the solution and participate in the public debate.

While we will also need to develop new antibiotics in the future, we cannot solely focus on this approach as a solution. New drugs take time for development, testing and approval before they are available to patients and bacteria keep on evolving.

As industry players, we have a responsibility as well. The industry should first and foremost address and improve its product stewardship including its environmental performance throughout the entire production and supply chain. We cannot allow the illegal discharge of waste containing active antibiotics and other non-compliant practices, which contribute to AMR.

Today most API for antibiotics are manufactured in China and India. While, there are outstanding examples of compliant manufacturers in both India and China, unfortunately, there are also production plants which have serious compliance and quality problems with some potentially fatal consequences.

In recent years we have seen a rising number of product recalls and even import bans initiated often by the US Food and Drug Administration (FDA) or the European Directorate for the Quality of Medicines and Health Care (EDQM). The Chinese Ministry of Environmental Protection and China’s provincial Environmental Protection Bureaus (EPB) oversee compliance and operate a website where warning letters and violations are posted online and publicly, similar websites are operated by the FDA and the EDQM. In a worst case scenario, this can endanger security of supply, if plants get shut down by authorities.

It means we need to apply the principles of product stewardship to make sure that from production through to use and disposal, along the entire supply and value chain, antibiotics are not just delivering positive direct benefits to patients but deliver positive benefits to society overall i.e. the negative impacts in production and use are minimised and antibiotics remain effective over time.

This is not just the industry’s responsibility—policy makers, customers and other industries are also involved. However, we must not hide behind thinking ‘it’s not just our problem” and instead we should engage and make a significant contribution to address these challenges.

We can take action, as individual companies and as an industry, building foundation for a strong and respected industry, by immediately focusing on:

Ensuring our production standards are of the highest level in terms of minimum pollution and waste throughout the supply chain. This has a direct link to AMR causes and also brings benefits to the communities in which we operate. We cannot allow the discharge of waste water containing active antibiotics. Contaminated waste water and other non-compliant practices contribute to AMR. We all must address such irresponsible behaviour and take action. For example, adopting the highest industry standards for ourselves and insisting that suppliers adhere to the same high standards, ensuring compliance with regulatory frameworks in the manufacturing country and also the end target market. Initiatives such as Together for Sustainability  audit suppliers on their sustainability performance, extending sustainability monitoring through the entire supply chain and can help to build a reliable and robust supply chain

Making sure our quality is as good as it can possibly be and is highly regarded across the community and valued by customers. We need to hold ourselves to these high standards and must ensure the same with our suppliers

Security of supply and regulatory harmonisation

These are lifesaving medicines and essential products for society. We need to have a safe, reliable and consistent supply chain. We also believe the industry should seek to adopt a combination of industry self-regulation and the right regulation from authorities on a globally harmonised level to ensure minimum environmental impact. It is key that this is accompanied by effective regulatory enforcement to ensure compliance

We need to apply product stewardship principles and leadership with policy makers and stakeholders. As the industry that produces antibiotics we need to be directly involved in the public debate around our products. To do so we need to develop good relationships with stakeholders in the NGO and policy communities, as companies are committed to high levels of sustainability performance. This requires leadership.

The need for harmonised regulation

Regulatory authorities in originating countries and in end markets must work together to ensure the highest industry standards and compliance. Regulators must also pay increased attention to environmental compliance and take enforcement actions if necessary.

In the United States and the European Union, strict regulatory regimens govern pharmaceutical production and environmental protection, enforced by respected organisations, including the FDA, the EDQM and local environmental authorities. In the United States, the production plant and the final product must be FDA approved. Enforcement of these regulations is carried out through inspections by regulatory authorities and by intermediate and Active Pharmaceutical Ingredient (API) customers themselves. The quality department plays a significant role in auditing suppliers. With thousands of manufacturers, regulators such as the EDQM and the FDA have to follow a risk-based and very selective policy to audit companies. Ultimately, regulation must attack the challenge from several sides to be successful.

Better market regulation and ensuring that no antibiotics are sold over-the-counter would help reduce misuse. Antibiotics should only be available on prescription from a qualified physician, who can give important advice on correct use and if necessary disposal.

This approach will deliver short-term benefits such as reducing waste, saving energy, building respect in the community and influence with policy makers while building the foundation for long-term value by developing the capacity to navigate what is likely to be a challenging future business environment.

The benefits for responsible producers

A sustainable and reliable supply chain is in the self-interest of responsible pharmaceutical producers that have spent years in building a valuable and respected brand. The fallout from issues such as forced factory closures, product recalls or environmental pollution, whether from own factories or with supplier facilities can greatly impact brand and reputation in the end market. Having a sustainable supply chain also means that reputation and brands are better protected.

In addition, all our plants operate dedicated state-of-the-art waste water treatment plants and we continuously monitor our production and waste streams for possible improvements and compliance.

We use a proprietary enzymatic technology to manufacture antibiotics and statins in our plants, which allowed us to significantly reduce impact on the environment (up to 64 per cent lower carbon footprint depending on product).

We believe that Sustainable Antibiotics and as such a sustainable supply chain, is our only option, economically, medically and ethically. 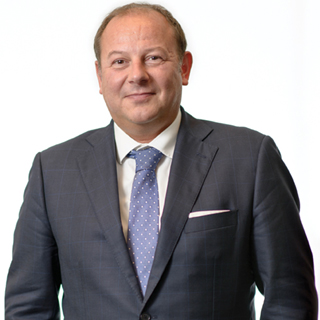 Karl Rotthier holds a Master of Laws from the University of Antwerp (Belgium) and the University of Southampton (UK), and an MBA from Vlerick Business School (Belgium). Since 1 July, 2014 Karl is President of DSM Sinochem Pharmaceuticals. Karl is married with two children.